The next-generation AMD Instinct accelerator is now available to customers.

In its Q2 earnings presentations, AMD confirmed “Initial shipments of next-generation AMD Instinct accelerators featuring 2nd Gen CDNA architecture”. That of course refers to Instinct MI200, which is a successor to the Arcturus-based MI100 accelerator.

The MI200 is equipped with Aldebaran GPU which is a dual-die processor. The fact that this GPU is already shipping means that AMD has become the first company to ship its next-generation MCM accelerator to customers, even before Intel released its Xe-HP(C) accelerator and before NVIDIA launched its H100 accelerator based on Hopper MCM GPU. 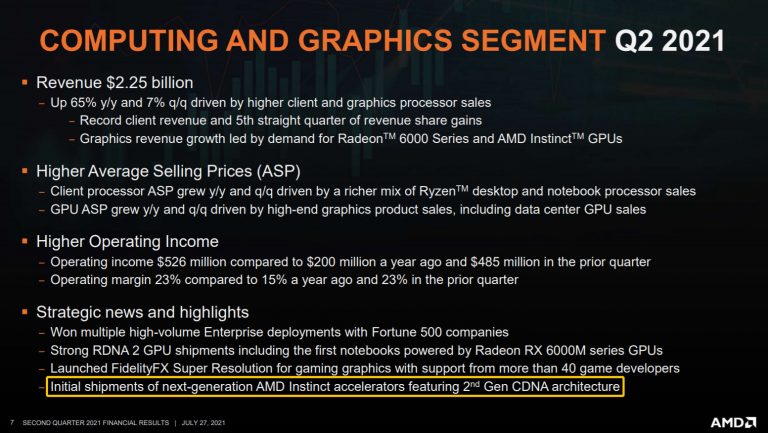 The configuration of the AMD Aldebaran GPU isn’t confirmed yet. However, it was already revealed that the GPU is to offer up to 128 GB of HBM2e memory and feature two compute dies. Each die is rumored to offers as many as 128 Compute Units. If each unit was to retain 128 cores, that would give a total core count of 16384.

This GPU is the first Multi-Chip-Module design from AMD, opening a new chapter in computer graphics. The manufacturer is expected to launch its first client MCM design with RDNA3 architecture next year.