The family of AMD EPYC CPUs is growing. The 4th Gen series will not only feature Genoa and Bergamo silicons, but also Genoa-X and Siena. The full family will therefore include four different variants of Zen4 based processors. 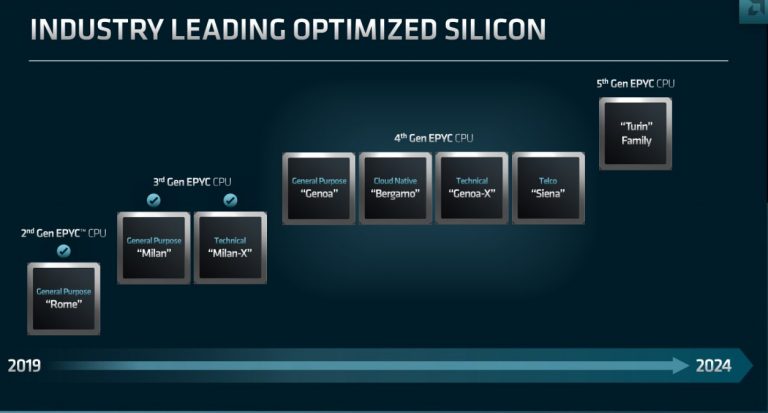 Probably more important is the confirmation of 5th Gen EPYC series codenamed Turin. AMD is not mentioning which Zen5 sub-architecture specifically does Turin use, but it is very likely to be Zen5. Earlier today AMD announced Zen5, Zen5 V-Cache and Zen5c microarchitectures, all of which can make their way to EPYC 7005 series at some point in the future. 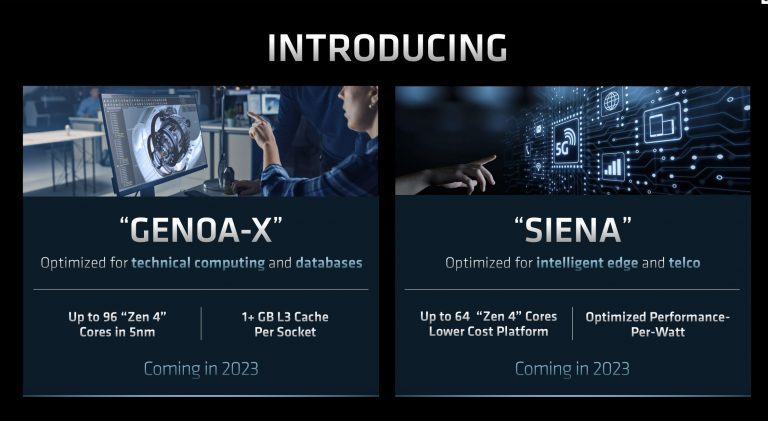 A new product series announced today is “Siena” which is a new custom silicon designed specifically for the telecommunication market. This is most likely AMD’s new cost-effective architecture that was rumored for the new SP6 socket. It matches the 64-core configuration as listed in the leaked slides.

The Genoa-X is a variant of Zen4 Genoa from EPYC 7004 series. It will feature 3D V-Cache technology listed with over 1 GB of L3 cache. That’s a visible increase over EPYC Milan-X 768 MB cache. Genoa is designed for SP5 platform, and it will support DDR5 memory as well as PCIe Gen5 and CXL interfaces. AMD confirmed that Genoa-X will feature just as many cores as Genoa non-X, which is up to 96 of Zen4 cores.

Both Genoa-X and Siena are set to launch next year.