The company finally lifted the embargo on its Ryzen 6000 mobile processor series codenamed “Rembrandt”. AMD confirmed that only the HSseries for thin gaming systems will be available starting today, while HX and U-series will launch in early March. According to the new roadmap, Radeon 6000 PRO mobile CPUs are also coming in mid-March. 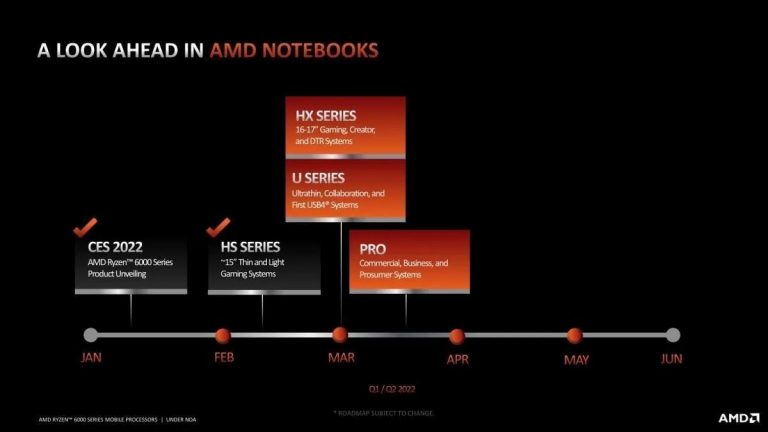 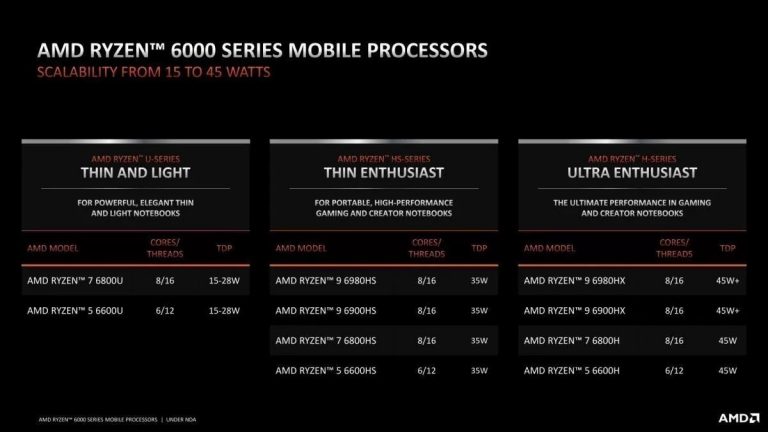 Among many details on the Rembrandt power efficiency and the silicon design, AMD also provided more benchmark results of Rembrandt’s integrated RDNA2 GPU, possibly the most important upgrade arriving with the new mobile series. 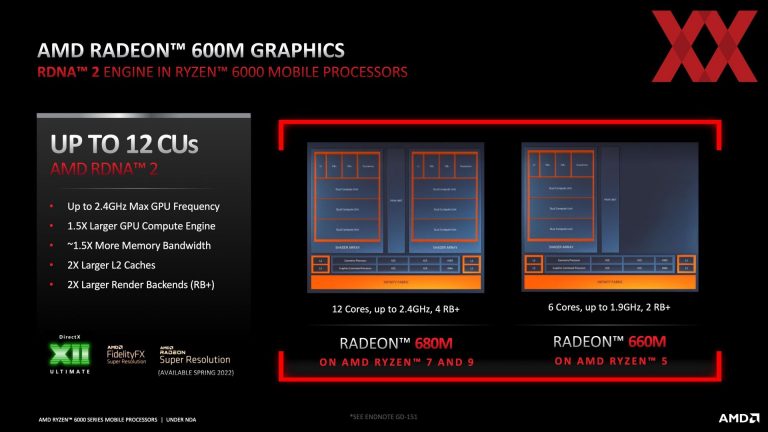 The company claims that their Radeon 600M iGPUs offer superior gaming performance compared to Intel Iris (Xe-LP), even on Ryzen 7 6800U SoC which is a power-limited processor for ultra-thin designs. The 680M iGPU is to offer 47-73 FPS while Intel Iris 26-42 FPS according to AMD’s own benchmarks. 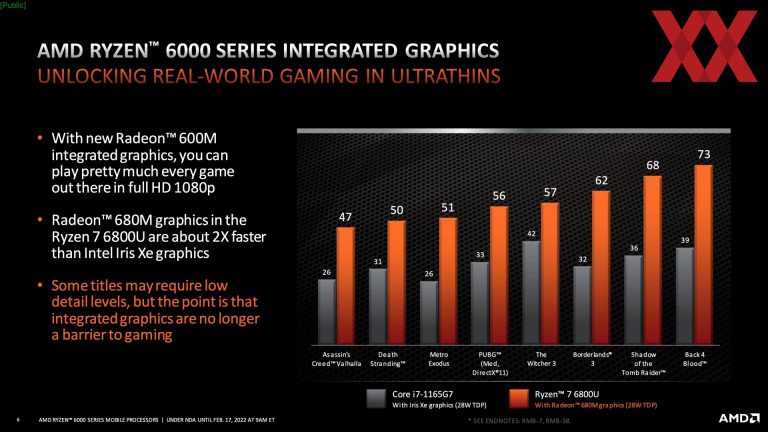 Furthermore, AMD also provided benchmark results featuring GeForce MX 450 and GTX Max-Q solution (in this case GTX 1650 Max-Q).  The integrated Radeon 680M may not be as fast as GTX 1650M in pure raster performance but it supports AMD FSR technology which can boost the framerate even higher. Technically, the GTX 1650M may also support FSR, however, it does not support NVIDIA DLSS because it is based on Turing architecture without Tensor cores. 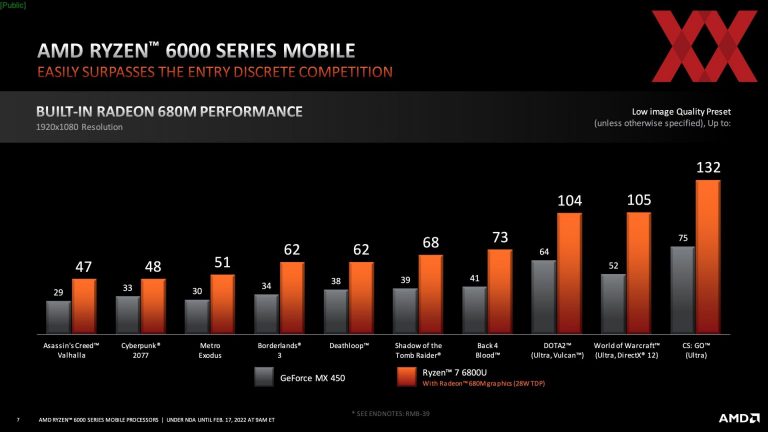 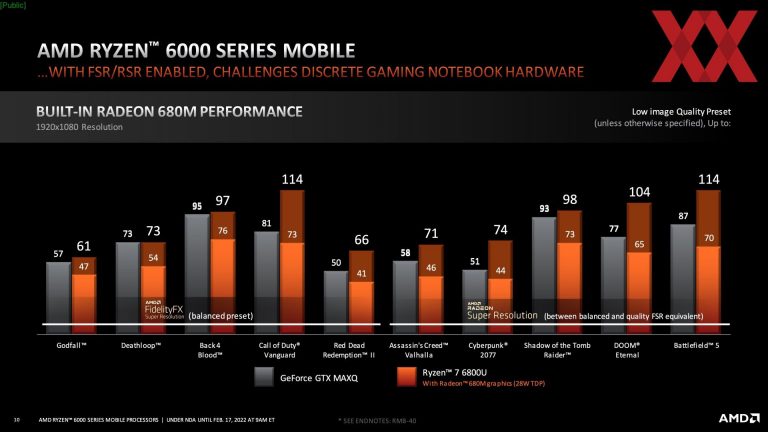 AMD also prepared slides for a cut-down Radeon 660M GPU featuring 6 Compute Units clocked up to 1.9  GHz. This GPU is available with Ryzen 5 6600U processsor, which AMD is comparing with Intel Core i5-1135G7 Tiger Lake CPU at 28W. 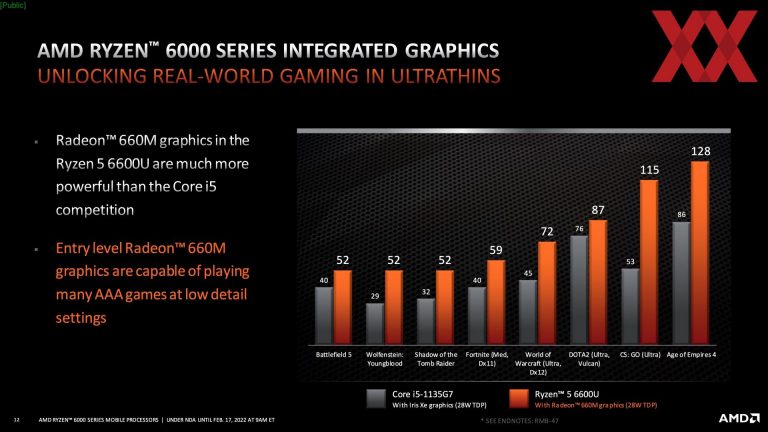 The GPU should provide at least 43 FPS in all tested games. The Radeon 660M is even more powerful with AMD FSR technology-enabled, which means that even more, demanding games such as Godfall, Deathloop, or Back 4 Blood can be playable at higher framerates (44-89 depending on a title). 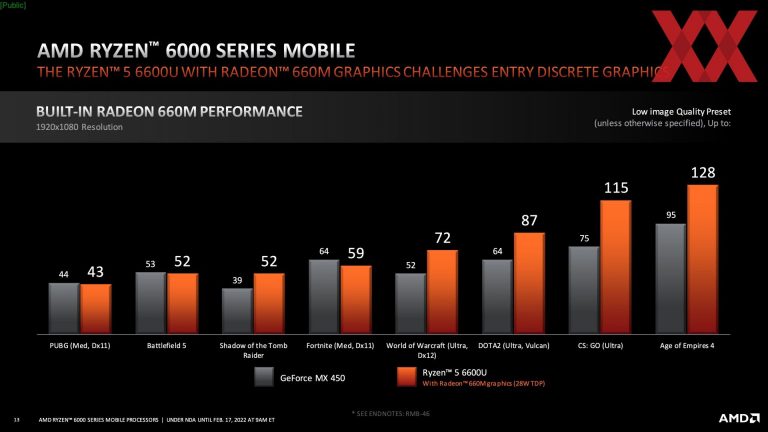 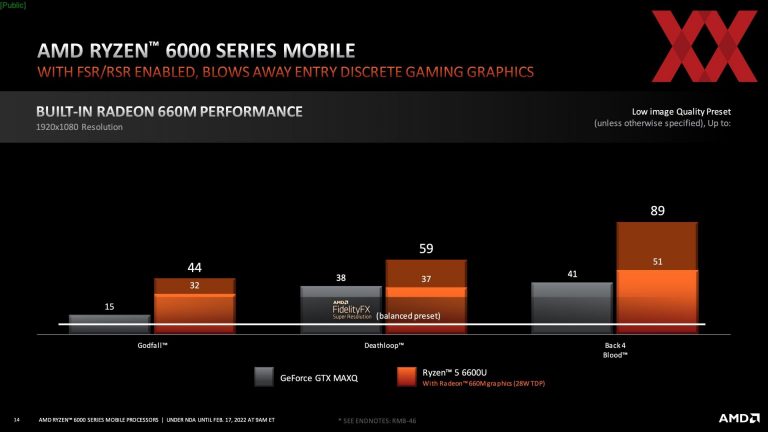