AMD is adding an unusual number of PCI IDs of its existing GPUs to the Linux kernel.

Phoronix reports that AMD might have just added IDs for the rumored 6nm refresh of Navi 2X (RDNA2) GPUs to the Linux kernel. While the IDs do not explicitly confirm it is a refresh, their number and the fact that they are added to existing GPU families might suggest these are new GPUs.

Greymon55 recently shared that AMD is planning to launch ‘only’ three Navi 3X GPUs, while the rest of the stack would be a refresh of existing GPUs, except using a more advanced 6nm fabrication node.

It was believed that AMD might be refreshing its Navi 22, 23, and 24 GPUs. The latter still has not been released and at this point, it is unclear when should we expect it to launch. Just recently AMD added its Navi 23 GPU to the existing family of products. It is now available for both Radeon consumer and Radeon workstation SKU and their mobile variants.

The patch features not only the Navi 22 and 23 but also Sienna Cichlid which is Navi 21. This GPU was not expected to be refreshed because it is rumored to feature just as many cores as Navi 33 (5120 SPs). This would be an unfortunate decision from a marketing and product segmentation perspective. 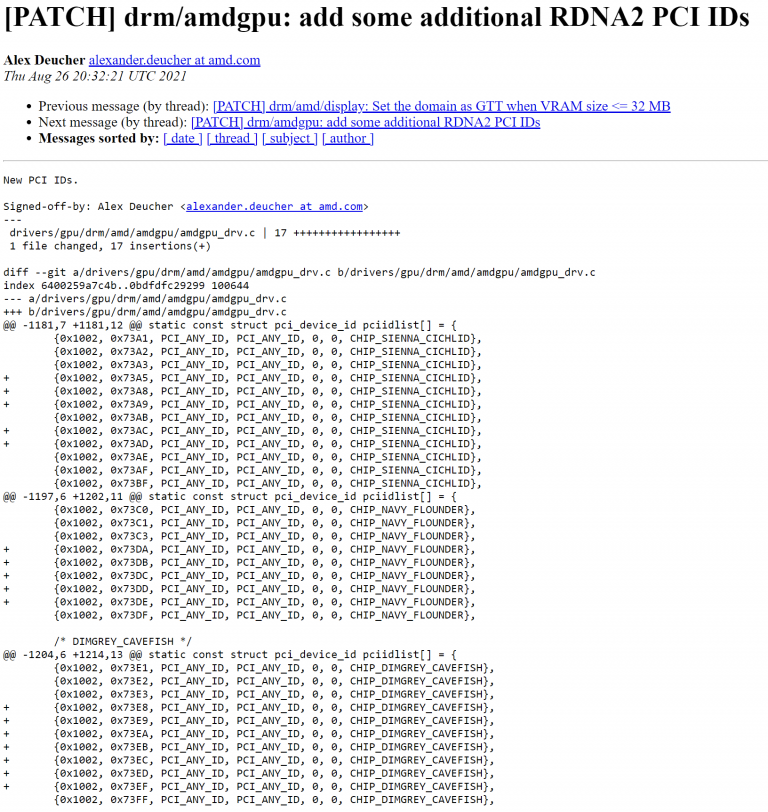 AMD might just as well be adding more variants for board partners or new revisions of existing GPUs, but that usually is not the case when we see such a large number of new IDs. However, at this moment we won’t know for sure what these represent until the first product with such IDs gets sighted in a leak.