Gamers with access to Amazon’s New World are reporting that their cards are dying after just 15 to 30 minutes of playing the game, Windows Central reports.

It is probably not a good idea to play New World right now. The closed Beta and Alpha builds of this game have reportedly been a reason for the bricking of GeForce RTX 3090 graphics cards, multiple users on the official game’s forum have reported.

The issue appears to affect mainly GeForce RTX 3090 graphics cards which are reportedly overheating and see power spikes. The game has an uncapped framerate in the main menus, which is usually associated with buzzing capacitors. Most users however have reported that EVGA RTX 3090 cards specifically are the most affected brand. A number of the RTX 3090 cards have been bricked in the process.

It is highly recommended not to play this game right now, at least not until developers publicly acknowledge the issue, not to mention release a patch.

New World makes standard DirectX calls as provided by the Windows API. We have seen no indication of widespread issues with 3090s, either in the beta or during our many months of alpha testing.

The New World Closed Beta is safe to play. In order to further reassure players, we will implement a patch today that caps frames per second on our menu screen. We’re grateful for the support New World is receiving from players around the world, and will keep listening to their feedback throughout Beta and beyond.

Update 2: Based on reports from other users, JayzTwoCents now reports that the issue with bricked GPUs does not affect EVGA RTX 3090 cards exclusively. Instead a wide range of high-end Radeon cards is also included:

I've now had the following GPU owners express they have had shut downs and failures with New World…
RX590
6800
6800XT
6900XT
3080Ti
3090
So once again, the issue definitely is with SOMETHING in the way the game New World is rendering. This ISNT a 3090'exclusive issue! PERIOD!! 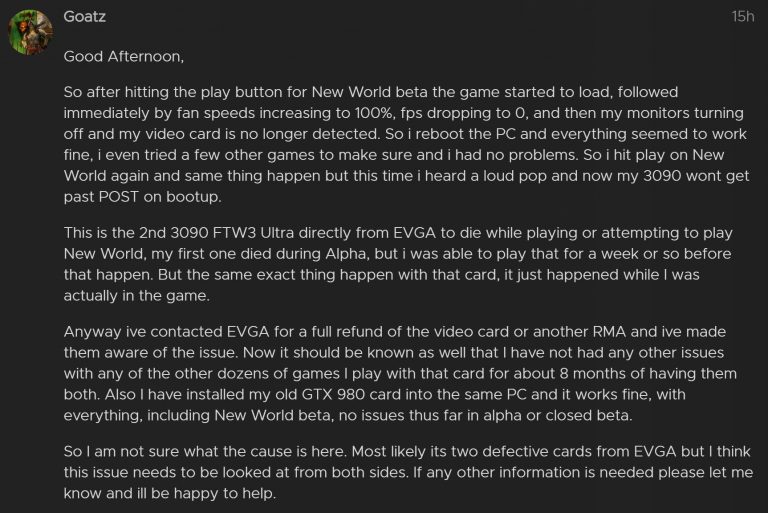 Amazon’s New World is now available for preorder at 40 USD and it should launch on August 31. With the game releasing this soon, it is truly a bizarre issue to encounter that can result in a 1,500 USD graphics card as a paperweight. Affected users should RMA their cards, as it is not typical behavior to see graphics cards die as a result of playing a game, no matter how poorly coded it was.