Xaver Amberger from Igor’sLAB and his friends were provided access to as many as 199 Intel Core i9-13900KS processors for a testing. This gave them a chance to share the last part of their large scale binning report for Intel Core K-series CPUs.

The KS is a Special Edition model with up to 6.0 GHz clock speed out of the box. From previous binning reports, it became clear that Intel has been saving 13900K chips for this special edition. Igor’sLAB reports that all Core i9-13900KS have one thing in common, their voltage/frequency curve will not go higher than 1.49 for 6.0 GHz. What this means is simple, if the voltage required to reach such frequency is higher, it will no longer be a KS chip, but Core i9-13900K instead.

Importantly, the KS variants are only prebinned models of the 13900K, not 13900KF, as the 6.0 GHz SKU has integrated graphics. So technically speaking, there is a greater chance that user finding a Core i9-13900KF processor with just as good V/F curve as KS variant, but Intel wouldn’t use this chip for the KS anyway. 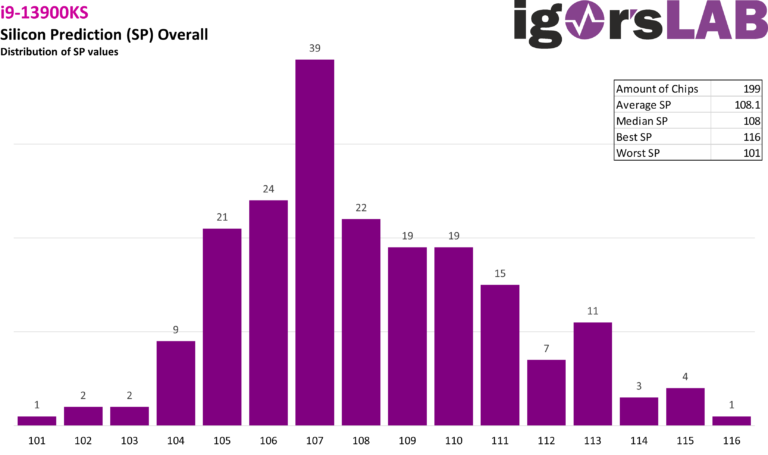 The Silicon Prediction figures presented here are based on ASUS algorithm implemented into LGA1700 motherboards. It is by no means an official figure, and it cannot be compared to other SKUs. This deterministic method of putting simple values to V/F curves makes such comparison much easier, but only among the same chips.

Out of 199 CPUs tested, the average SP score was 108.1 points. The distribution of the SP scores for Performance and Efficient cores was different though, with an average of 117.5 and 90.4 respectively for each type of core. Xaver notices that the Efficient SP score distribution moves slightly to the right, indicating that Intel is looking at the smaller cores as well, despite the CPU using the same E-core frequencies as 13900K SKU. 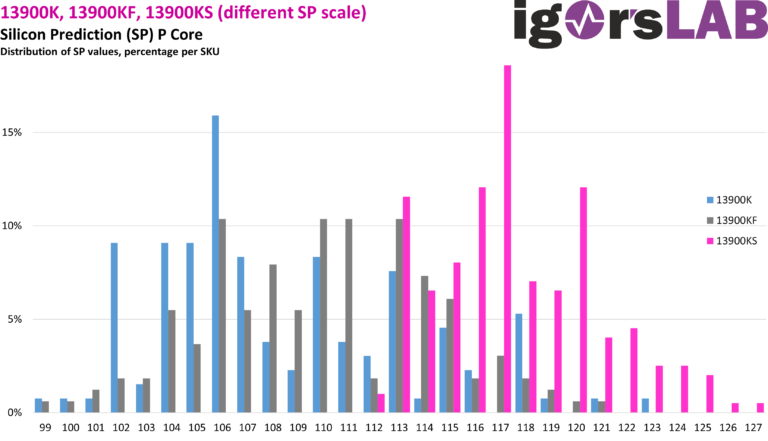 The chart above plots SP scores from Core i9-13900K/13900KF and 13900KS SKUs. Again, the SP values are not on the same scale for each SKU. Therefore, this chart simply shows the distribution model, which is clearly leaning towards right with the KS variant. It would have made more sense to compare voltage/freq curves, but one can imagine this would take days if not weeks for such a large number of processors.

The original report also focuses on memory controllers and how they correlate to ASUS reported SP values. Spoiler alert: they show no significance at all and higher SP score will not guarantee 8 Gbps memory support, but for more details please have a look into the article below.