As usual Intel engineering sample CPUs are available on the black market months ahead of launch.

The introduction of 13th Gen Core series is not expected till September or October this year, but this is not stopping people with access to pre-release hardware from actively selling it. As Intel goes through its production cycle and samples get many iterations, some become obsolete for parties involved, which is how they end up on auction sites.

Technically speaking, those samples should return to Intel, however Intel rarely goes through the trouble of collecting them back. This is how some units end up on Chinese sites often with really interesting prices.

The alleged Core i9-13900K CPU is confirmed to be working on ASUS Z690 ROG APEX motherboard. The description claims it boots up and even supports overclocking. It’s a full Raptor Lake silicon with 8 Raptor Cove cores and 16 Gracemont. No other details are available. 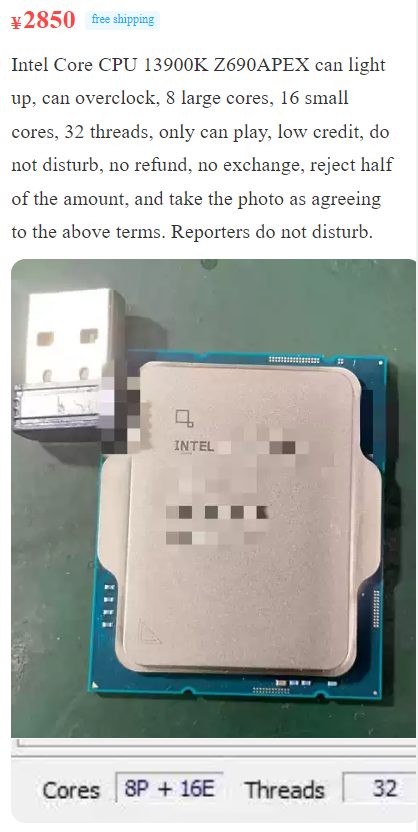 Since the seller hid all the important information, such as CPU SPEC code and QR codes, we cannot confirm if this sample is really Raptor Lake, and we probably will never know, because the sample is already sold. It was listed at 2850 RMB (426 USD), which is indeed a really good price for an early sample.

We have not yet seen any 13th Gen Core K-Series CPU, but the non-K variant has recently been tested by Expreview. Both samples have the identical rectangular Intel logo, which confirms it was manufactured this year.