Since not all benchmarks are yet fully compatible with Intel’s heterogeneous technology, it is impossible to confirm whether the results are fake or just showing wrong data.

Intel Core i9-12900K has now appeared in the BaseMark database with 12 cores and a CPU speed of 3200 MHz. As we have already learned from previous leaks, this CPU is to feature 16 cores in total and 24 threads. The full core count includes 8 high-performance (big) cores as well as 8 high-efficiency (small) cores. This is why BaseMark might be showing the wrong data, simply dividing the thread count (24) by two, or possibly, somebody is just having fun with sharing invalid data.

Assuming that the leak is true though, it may also be important to note is that the platform for this alleged Alder Lake CPU is Acer Z69H6-AM. This product name has not been seen in any leak yet, but it does appear to refer to the Z690 platform. Thus, this could potentially be Acer’s own motherboard with an LGA1700 socket. The manufacturer already offers its own desktop gaming systems, including the Predator series offering high-end parts such as Intel 11th Gen Rocket Lake CPUs. Naturally, a successor with the 12th Gen Core series is also to be expected. 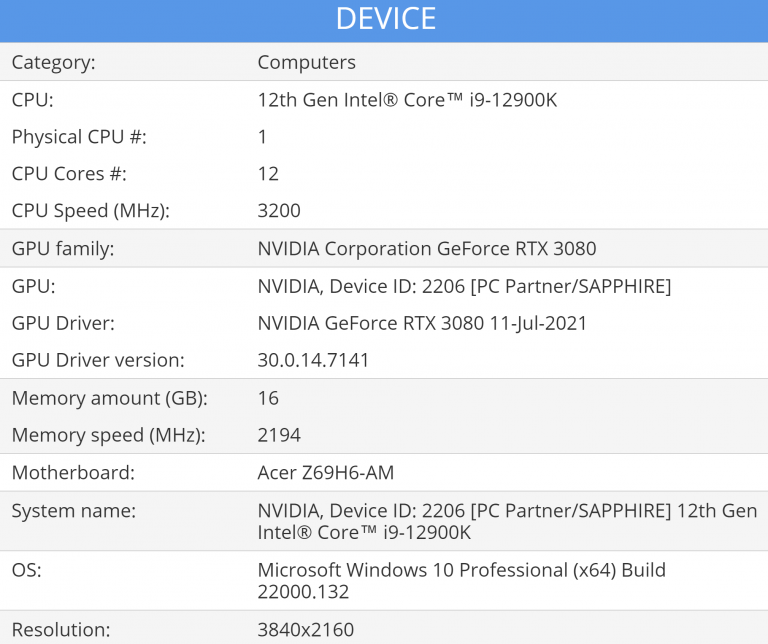 In the BaseMark High DirectX 12 GPU profile test, the system scored 17744 points, which is more or less in line with existing RTX 3080 scores in the BaseMark Powerboard.

The 12th Gen Core series should now be available as qualification samples to Intel board partners and OEMs, who are currently validating the performance and optimizing their platforms for the upcoming launch, now rumored to be in October.