According to Intel, Arc GPUs must use Resizable BAR for optimal performance

According to the guide, only three Intel CPU series are supported as of today: Intel 12th Gen Core “Alder Lake” and 600-series motherboards, Intel 11th Gen Core “Rocket Lake” and 500-series and Intel 10th Gen Core “Comet Lake” series and 400-series chipsets. While the document does not list any other platform, AMD Smart Access Memory enabled systems are listed as potentially supported. That may suggest that AMD platforms are unofficially supported. 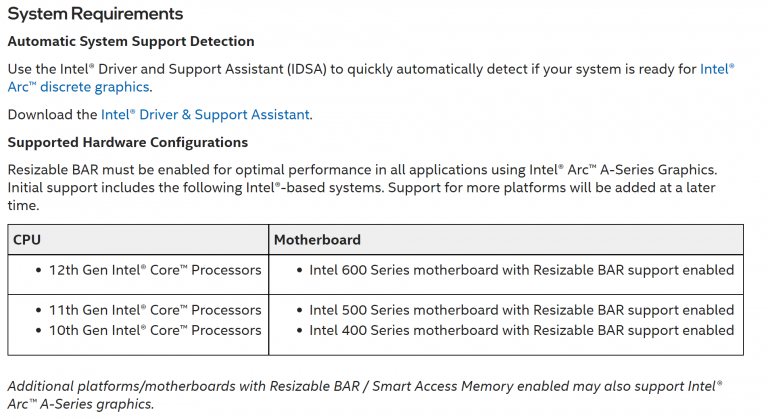 Interestingly, the guide lists a Resizable BAR as a requirement. It is explained as a necessary feature for ‘optimal performance in all applications’, but it is not described how Arc GPUs perform without Re-BAR or if they work at all.

While Re-BAR is undoubtedly a technology that should be supported by desktop PC in 2022, there is still a large base of users that do not have this feature enabled on their motherboards. Hopefully, reviewers will pay attention to this topic once they get their hands on Arc A380. This is thus far the only desktop graphics card that has now been released in China exclusively.