An application was made by NVIDIA to register three new trademarks.

Just four days ago NVIDIA registered “Turing” trademark. This is actually the first proof that NVIDIA has a hardware or software associated with this name.

Interestingly, NVIDIA also applied for two new RTX trademarks. This ray tracing technology has been officially introduced just a few weeks ago. The RTX could potentially replace GTX for few products unless it’s only a technology or software.

The speculation goes even further. At AdoredTV YouTube channel you will find a video describing the new architecture and new naming scheme for GeForce products. The video aligns with the latest trademark information. The new series would feature Turing architecture and GTX 2080 would, in fact, be called RTX 2080.

NVIDIA would allegedly replace GTX branding with RTX for 2080 and 2070 models. The video has screenshots from something that looks like an internal presentation of some sort. The source allegedly is from NVIDIA itself. 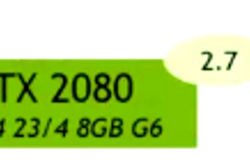 The full series with performance estimates and price ranges were shared in the video as well:

And here is the full video: