I’ve been contacted by our friends at Informatica Cero, who have something interesting to share. I cannot verify the authenticity of these slides, but our friends assured me it’s not fake. I’ve seen the full slides (with header and footer) and they seem to look similar to most channel update presentations.

This slide outlines the roadmap for AMD desktop CPUs and APUs for 2018 and 2019. It lists Pinnacle Ridge as a successor to AMD Summit Ridge. This is not new, we already leaked the slides with Pinnacle Ridge a few months ago.

What’s new is Matisse. Henri Matisse is a painter and so is Picasso. If this rumor holds true, then AMD may adopt new codename schema starting from Zen 2, basically naming their new Zen generations after painters.

According to the slide, in 2018 no Zen 2 is to be expected. Pinnacle Ridge is based on Summit Ridge architecture with some ‘performance uplift’.

More interestingly, Raven Ridge is also planned for next year (I guess this is where the rumors with Ryzen 2000 are starting to make sense).

These APUs are to feature up to 8 Zen threads (not cores) and Vega 11 (as for CUs). They will support AM4 desktop socket and FP5 notebook socket. In 2019 AMD would refresh Raven Ridge as Picasso. Same socket and same architecture, but with more performance.

Last but not least, Vega 20. This is a refresh (likely on 12nm LP fabrication process) of Vega 10. According to the ‘leaked’ roadmap, this GPU would launch somewhere in the third quarter of 2018. The slide lists PCIe Gen 4 which was also present in the slides we leaked some time ago.

Finally, the third slide shows Ryzen PRO Mobile performance compared to Kabylake i5 processor. The The Ryzen 5 PRO Mobile APU is equipped with Vega graphics which is faster than Bristol A12 APU and Kabylake’s integrated graphics. It has a comparable idle power consumption. 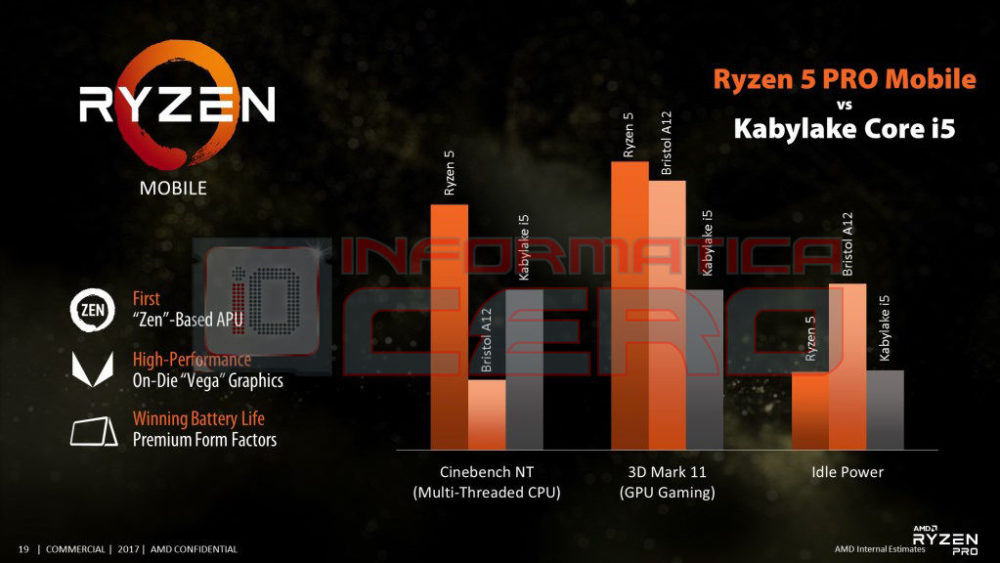