The slide you are about to see comes from the official press event of AORUS Z370 motherboards. I can assure you it’s not fake, but there is (supposedly) a big mistake here. The slide says quad-channel memory support. As far as I know, Coffee Lake-S is dual-channel only. Intel may be desperate by delivering third ~300 USD CPU in less than 9 months, but I don’t think they are ready to introduce QC for mainstream segment just yet. It’s still funny though, I think no one noticed this at the event.

Now, when it comes to actual specs, all AORUS Z370 boards are in ATX form factor. They vary in design and number of interfaces. Apparently, Gigabyte has no AORUS GAMING 9 in the making and the flagship model is GAMING 7 (so just the same as for Ryzen). This motherboard has two Gigabit Ethernet ports (Killer E2500 & Intel i219V) and features ESS Sabre Audio with Realtek ALC1220 chipset.

AORUS Z370 motherboards all support RGB Fusion, a lighting feature some love and others hate. Remember that you can always turn the LEDs off, which still makes the boards look really cool.

Coffee Lake-S is now confirmed (by Gigabyte, ASRock and others) to support LGA1151 socket. 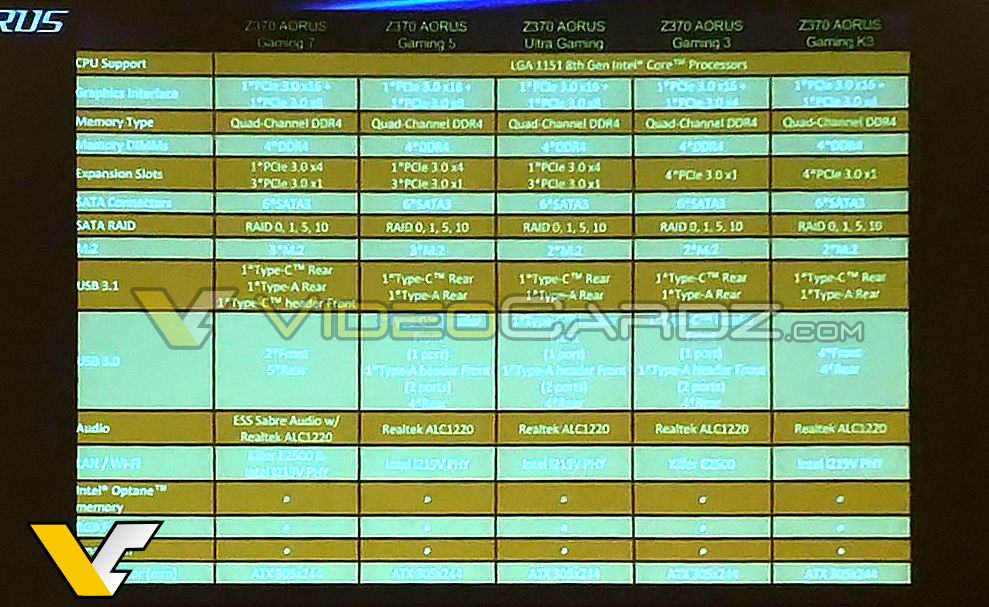