Yesterday my RX Vega 64 arrived. I promised that the first thing I’m going to do is BIOS flashing. I’ve tested few possible combinations to see where we can go from there.

The Radeon RX Vega 64 has two BIOSes. They don’t have names, so I’m going to call them A and B. The A is the primary BIOS of the card. It has higher power limits. The B BIOS cannot be modified (at least not on my card). It means that it cannot be erased. Generally, that’s a good thing, it’s simply impossible to corrupt both BIOSes and brick the card. You can always switch to B and restore the A BIOS. For me though, that’s a problem, because I don’t need the B BIOS and all BIOSes had to be flashed to primary ROM, which I need.

From all five BIOSes I have tested, most of them were working fine, although one had graphics glitches after few tests. After my initial testing, I decided not to buy RX 56, simply because flashing 56 ROM into 64 makes it fully fledged 56. Unlike the 56->64 mod, the reverse procedure keeps the correct Stream Processor count. So by flashing 56 to primary BIOS I have two cards in one (yay!).

Anyway, here are the results.

Update: One more thing, some people misunderstood what this post is about. It’s not about performance gains from BIOS changing. This post is to tell you whether different BIOSes work. If the computers boots, graphics card is detected correctly and it doesn’t fail in benchmark, then it ‘works fine’. The difference between Liquid and AIR RX Vega 64 BIOS comes down to ‘target temperature’.

In Wattman target temperature cannot be changed for Liquid ROM above 70C, which means the only way to avoid throttling is to increase fan speed or replace the cooler. On this chart, you can see that the Liquid BIOS starts higher than AIR BIOS, but it drops quickly after GPU temperature reaches 70C. By increasing fan speed to 3400 RPM (quite loud), we gain 120 MHz alone. 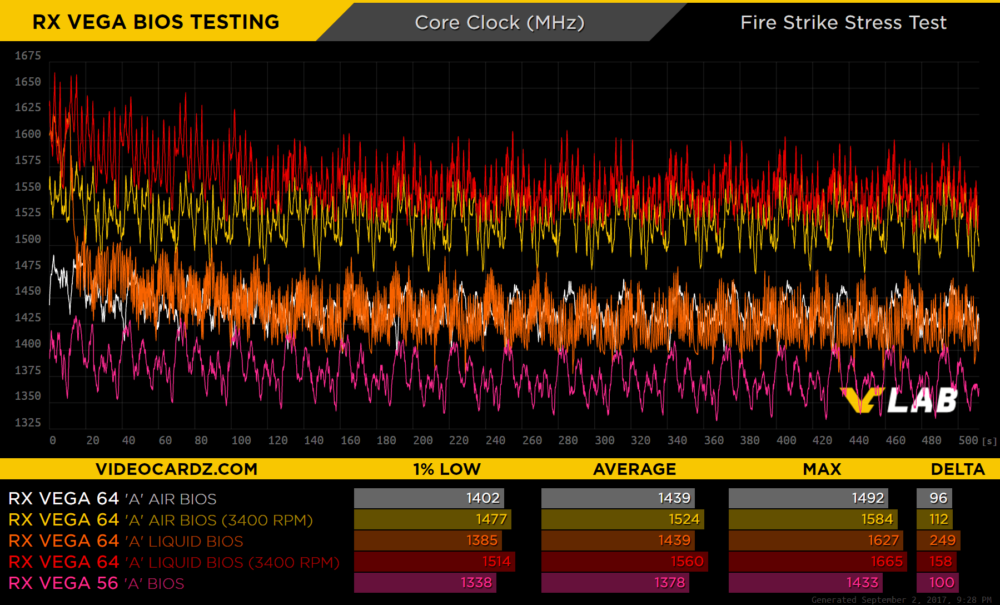 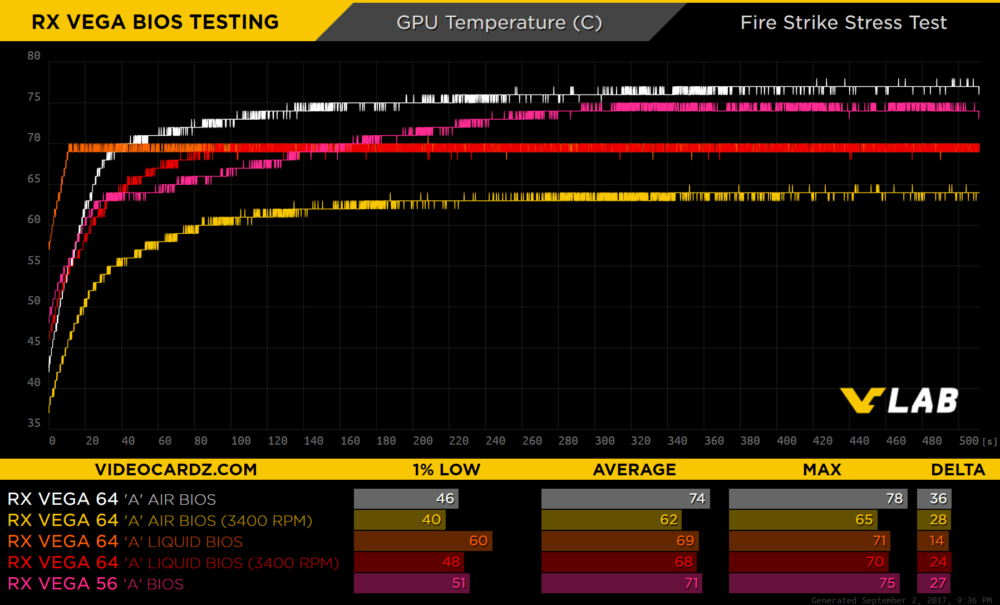 As you may expect, I’m working on a full review. I will compare 4 different BIOSes in all 3 preprogrammed modes. If you have any special requests, drop a comment below.

Update #2: I’ve been contacted by EKWB, who wanted to share their own research regarding Vega overclocking. What they intend to illustrate here is Vega undervolting and overclocking can really generate good results, especially with water cooling. By allowing each power state to run at lower voltage and by increasing power limit you can achieve higher clocks within the same power envelope.