There are at least three variants of Vega 10 GPU packages

A very interesting story was just published at Tom’s Hardware. Although the rumors about Vega 10 arriving in different variants have been circulating for the past few days, only now we have a confirmation directly from AMD, through TH’s sources.

According to Tom’s Hardware, there are at least three variants of Vega 10. The variants come from different factories which equip Vega 10 with different memory chips. The main difference is lack of molding on the non-resin variant. These chips are reportedly harder to use for custom designs as the GPU is 40 μm higher than HBM2 modules. It’s also worth noting that molded and unmolded design have 0.1 mm difference in GPU height. Which is actually much bigger issue than it may sound.

If that wasn’t enough, there’s also (allegedly) a fourth resin variant strictly for RX Vega 56. The other three were pictured by Tom’s Hardware:

Molded/Un-molded Package = a problem for board partners

The existence of multiple variants causes a lot of problems for board partners. One could think that 0.1 mm difference is insignificant, but it is already causing a lot of production issues. According to TH, board partners are experimenting with different screw lengths to avoid potential heat problems. It may not be an issue for GPU cooling, but bear in mind the cooler is also attached to VRM section. A small difference there, means that the cooler is also misaligned elsewhere.

What’s also interesting is the fact that AMD has a special presentation for board partners explaining the difference for all Vega 10 variants. The slides were published by Tom’s Hardware: 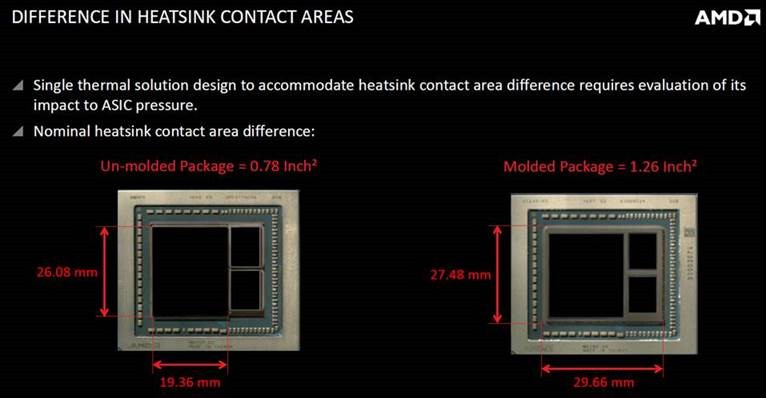 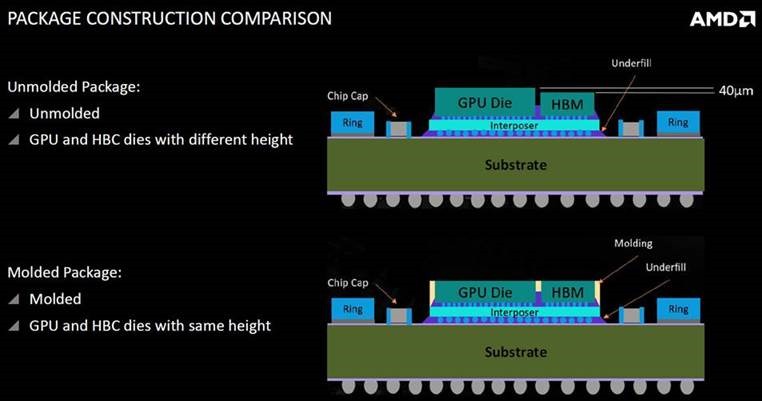