As you know, I try to avoid rumors and speculation as much as I can. I only focus on things that can be confirmed one way or another or something that could be considered a leak. 3DCenter is known for various analysis of GPU market. Their publications are hit or miss. For instance, 3DC was the first site to ever to mention Pascal GP102, which as you know turned out to be true, but the website also reported specifications on multiple occasions, which in the end were not correct.

Today we look at GeForce 20 series, which is believed to succeed GeForce 10 series next year. The reason why I’m posting this article is because I’ve already asked a few manufacturers about GeForce 20 series. Obviously, my questions were not about specifications (as it’s too early), but more about the naming.

There are two possibilities, either next GeForce series are called GeForce 11 (GTX 1180) or 20 (GTX 2080). The first possibility would probably never be accepted by NVIDIA marketing team, also NVIDIA has been using similar naming scheme (10..20) with the Quadro lineup. In fact, everyone I asked also thought that next series is called GeForce 20.

So what does it mean? It means that GeForce GTX 1080 successor would be called GTX 2080, and this is what 3DC came up with: 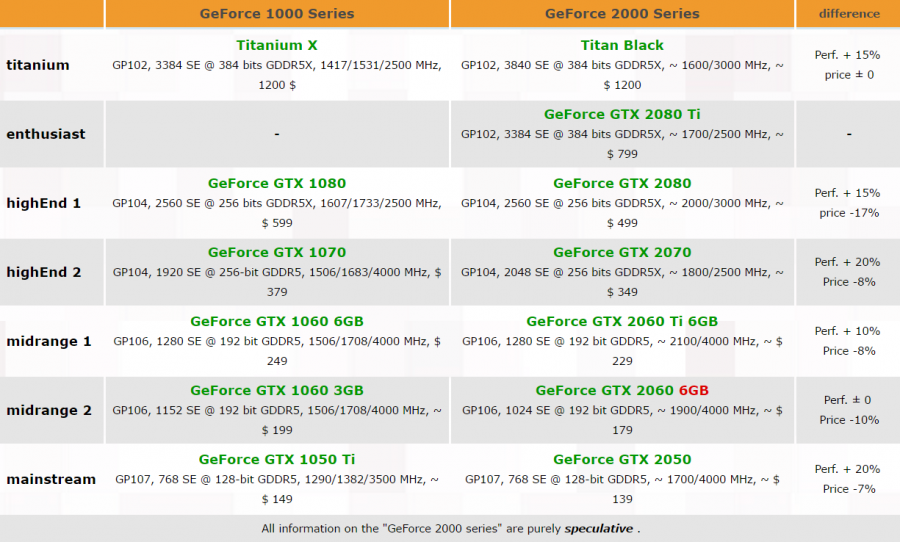 In my opinion, those specs are possible, but there are much better ways to handle Pascal Refresh with GeForce 20. 3DC assumed that most cards will simply receive a boost in clocks. Well, this is possible if manufacturing process would mature or if NVIDIA was to use newer 14nm FF process, but such gains are nothing interesting to anyone who would consider upgrading. For such reason, I think that most cards will simply be rebranded into lower-lier models, so just like it happened with GeForce 700 series.

Now let me explain. If NVIDIA wants to sell just as many Pascal chips as with GF 20 series as it did with GF 10 series, consumers need to see a noticeable boost in performance over past generation. That said, 10% boost based on higher clocks is not going to persuade most consumers. In fact, most of them, are probably enjoying 2000 MHz clocks as we speak.

My theory is that GP104 would be used for two cards GTX 2070 and GTX 2060, with GTX 1080 being rebranded into 2070. This way NVIDIA could introduce GTX 2080 based on cut-down Pascal just before Vega 10. Only then after few months of selling partially disabled chip, NVIDIA could introduce fully enabled silicon with GTX 2080 Ti or TITAN X Pascal 2. Both of these cards are probably going to aim at the ultra-enthusiast market where money is no issue.

Obviously, such rebranding would not happen at once. NVIDIA would need time to replace older generation with cards in new packaging. Rebranding or refreshing is not always a bad thing, as long as it doesn’t happen few times with the same chip. Manufacturers can easily reuse their new coolers and cut their costs even more. In the end, consumers will pay less for faster cards. And those who want more will pay extra for coolers adopted for a brand new chip (here it would be GP102).

We are looking forward to seeing GP102 in pure gaming (and affordable) GeForce graphics card. Latest rumors point towards CES 2017 announcement of such card. It may seem too early to introduce GeForce 20 series, but it should be just in time to claim yet another victory in the high-end market over the competitor.

One thing is certain, NVIDIA is not really interested in bringing HBM2 graphics cards to gamers just yet.