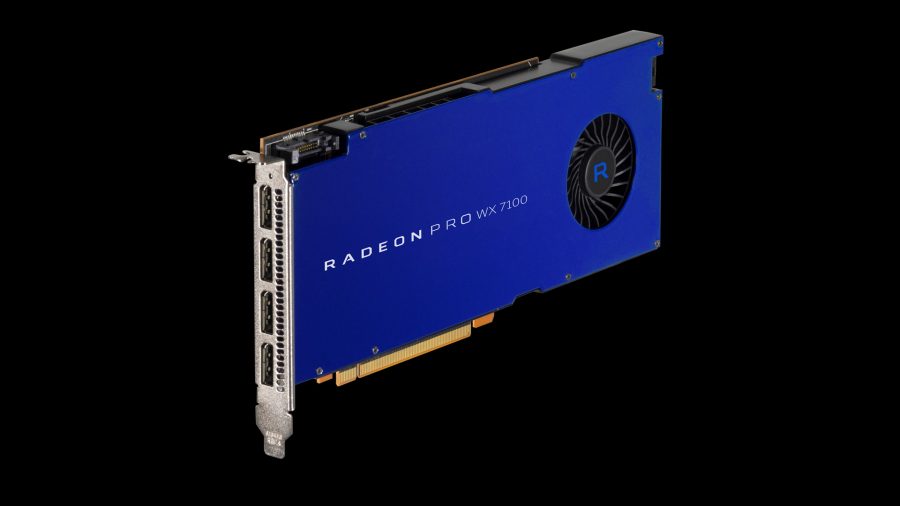 Transformational inflection points are changing the way content is created:

The new Radeon Pro WX Series of professional graphics cards represent a revolutionary approach for professionals rooted in a commitment to open, non-proprietary software and high performing, feature-rich hardware that empowers people to truly create “the art of the impossible”.

All three products are expected to be available in Q4 of 2016. 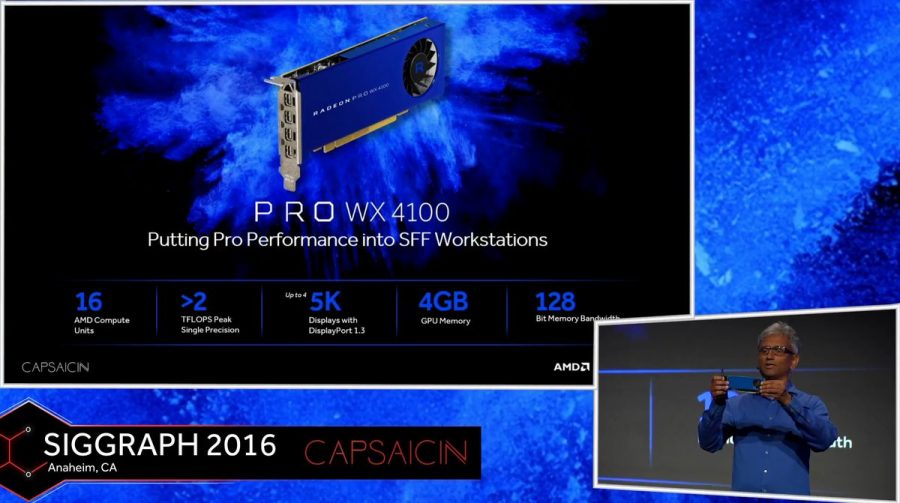 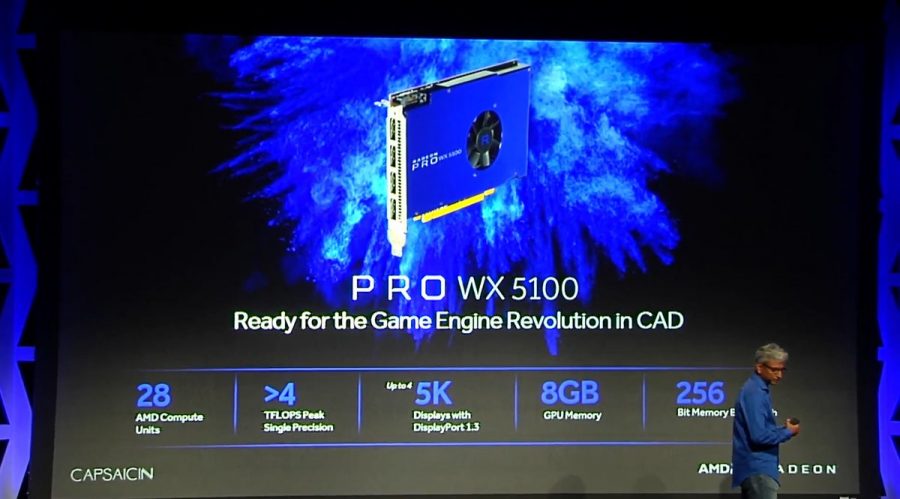 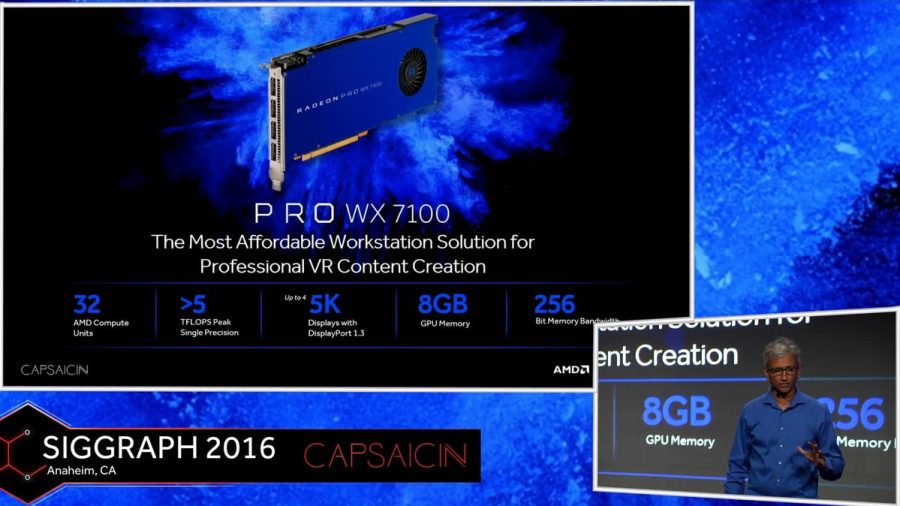 “We have taken a long, hard look at the workstation space and chose to focus on what we define as ‘the art of the impossible.’ Radeon Pro represents a powerful alternative to the old way of doing things, setting aside proprietary solutions for open source ones, and closed ecosystems in favor of greater choice and flexibility,” said Raja Koduri, senior vice president and chief architect, Radeon Technologies Group, AMD. “When you invest in Radeon Pro, you’re not just investing in a product, but in a holistic approach to design and content creation. Radeon Pro gives our customers full control of their destinies, the opportunity to realize gains across the entire ecosystem, and the ability to create the ‘art of the impossible’ without proprietary tools dictating the way they practice your craft.”

“With Radeon Pro, AMD has crystalized a clear strategy to drive the democratization of content creation,” said Jon Peddie, president and founder, Jon Peddie Research. “By offering highly capable graphics hardware and harnessing the best open source software, whether from AMD or contributors worldwide, they are effectively building a huge ecosystem to address the demanding challenges faced by graphics application designers.”

The new Radeon™ Pro WX series graphics cards deliver on the promise of this new era of creation, and are designed for creative professionals and those pushing the boundaries of science, technology and engineering.

Based on the Polaris architecture, the new Radeon Pro WX Series graphics cards employ the latest advances in AMD’s 4th generation Graphics Core Next architecture, uncompromising 4K video decode and encode support including HEVC2 and VP9 and next generation display support including DisplayPort 1.4-HDR3 and HDMI™ 2.0, all built on a power efficient 14nm FinFET manufacturing technology. Importantly, the professional graphics solutions are fully compatible with open source software through GPUOpen.

“Radeon Technologies Group’s professional-grade graphics help our customers with complex projects that demand the highest performance,” said Josh Peterson, vice president of Product Management, Workstations, HP Inc. “We know our workstation customers can rely on AMD FirePro™ graphics when coupled with the performance and reliability of HP Z Workstations, and we look forward to offering Radeon Pro graphics in the future.”

Increasing Speed of Modern Workflows by an Order of Magnitude, Disruptive Technology Accelerates the Art of the Impossible With Potential for Terabytes of Memory 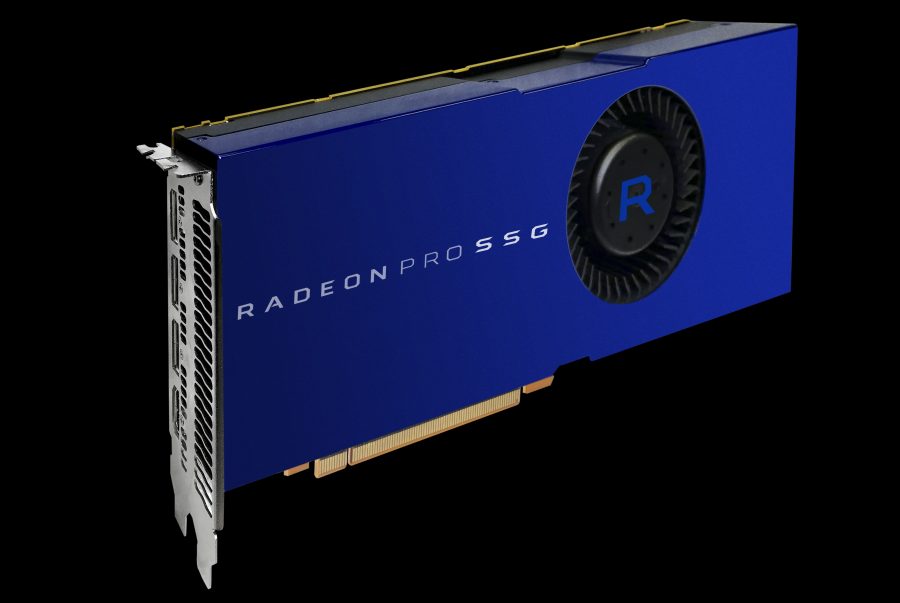 During the world’s first demonstration of a Radeon Pro SSG solution, 8K raw video timeline scrubbing was accelerated from 17 frames per second to a stunning 90+ frames per second. As content creators rapidly adopt 8K resolution to future-proof their content, a 5X performance boost will improve quality of life, productivity and efficiency in the editing process.

State of the art content creation, scientific and engineering visualization applications require the processing of big datasets, far larger than can be contained within the capacities of existing GPU memory. Current limitations require slices of data to be processed individually and later merged by software, and often incur significant latency for fetching additional data from system memory. These big data problems discourage developers in these domains from leveraging the advantages of the GPU. Radeon Pro SSG memory addresses the big data problem for GPUs, paving the way for improved performance and dramatically increased user productivity.

“One of the most challenging constraints faced by GPU computing applications is the inability to access terabytes of data,” said Raja Koduri, senior vice president and chief architect, Radeon Technologies Group, AMD. “Radeon Pro SSG is poised to not only speed-up processing for many applications with very large datasets, but also to enable new application experiences by utilizing data persistence of non-volatile memory. This will be a disruptive advancement for many graphics and compute applications.”

“AMD has a long history of memory technology innovations, and Radeon Pro SSG is the latest example,” said Patrick Moorhead, Founder and Principal Analyst, Moor Insights & Strategy. “Larger local memory on the graphics card can speed-up processing for many applications with very large datasets, and should also allow for results with finer granularity and resolution. This will be a notable advancement for many graphics and compute applications.”

Memory architecture
When needed information is not available in GPU memory, typical memory architecture requires the GPU to send a request to the CPU. The CPU then retrieves the needed content from CPU memory, or if not there then from a hard drive. This entails considerable overhead that limits GPU performance. With this new GPU technology, a one terabyte extended frame buffer is dedicated to support the GPU. This enables much larger datasets to be loaded locally, connected over a dedicated PCIe® bus. When the GPU requests content, it looks first in the local frame buffer and only needs to involve the CPU if the data is not already in the extended frame buffer.

Availability
Applications for developer kits are now being accepted. These are available for $9,999. Full availability is planned for 2017. For more information and an application for a developer kit, refer to the Radeon website.