Pimped out by the ROG Strix team, the ROG Strix RX 480 is the souped up version of AMD’s latest bang-for-your-buck offering. Time to upgrade your graphics card to play the latest games without breaking the budget. 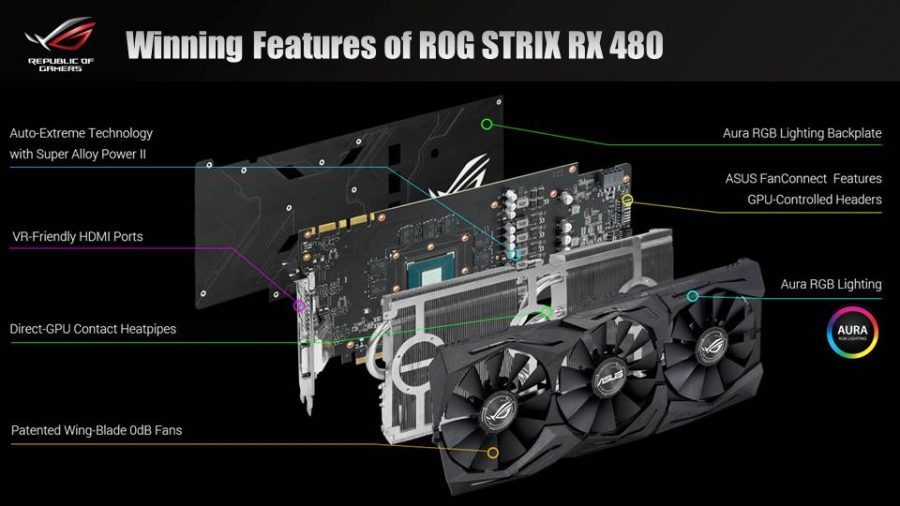 The GPU (grahics processing unit) comes factory-overclocked to 1330MHz in OC mode with headroom for further tweaking (1310MHz boost clock in gaming mode) and is paired with 8GB of GDDR5 video memory operating at 8GHz on the 256-bit memory bus. This translates to a performance boost of 15% in 3DMark Fire Strike and 19% in the latest games such as DOOM and Hitman compared to reference, that’s quite a boost! In comparison, the reference card runs at 1266MHz (Boost clock) and 1120MHz (base clock). 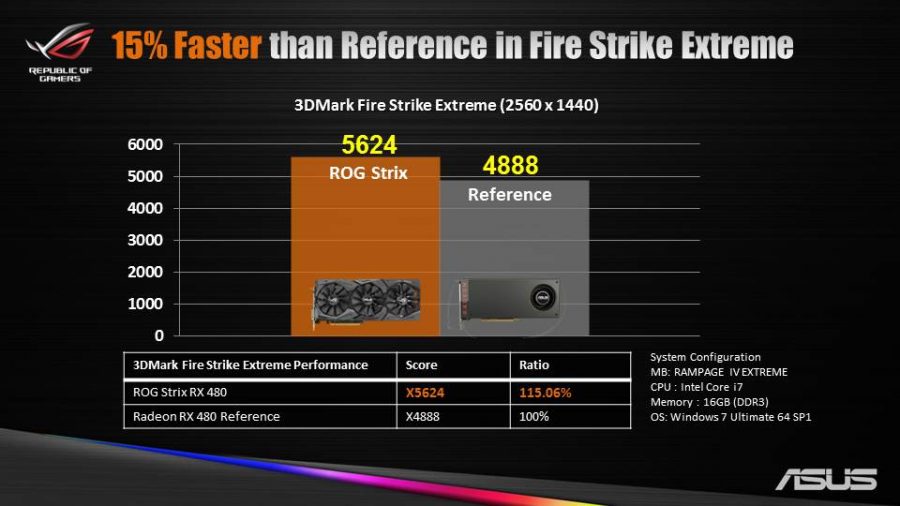 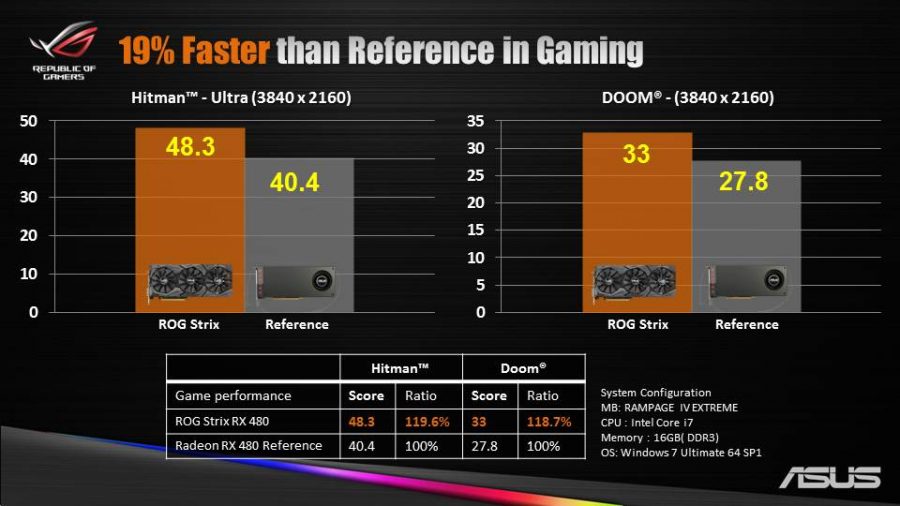 The new GPU together with the DirectCU III cooling solution with triple wing-blade fans results in a graphics card that is three times quieter (below: three times the intensity changes the sound power level by 4.77 dB) and 30% cooler than reference, only by having this level of thermal performance can this card incorporate 0dB technology which makes the card completely silent during casual gaming. 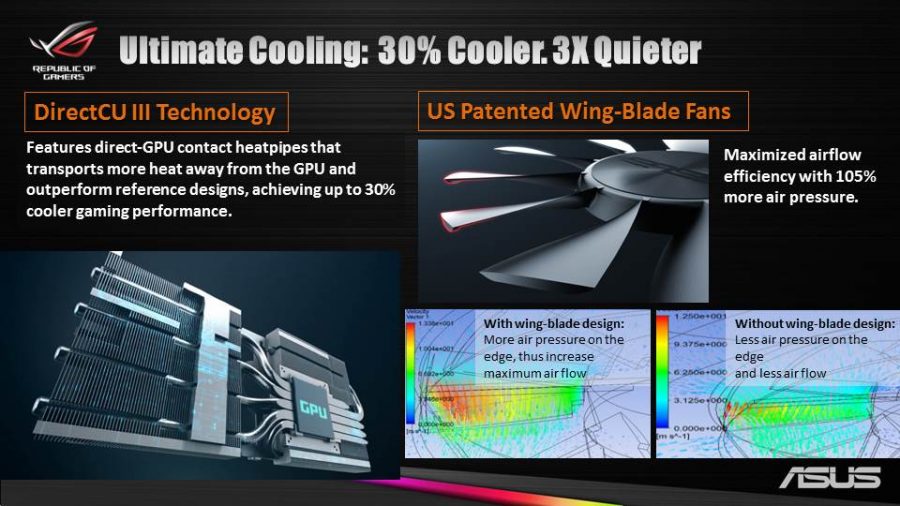 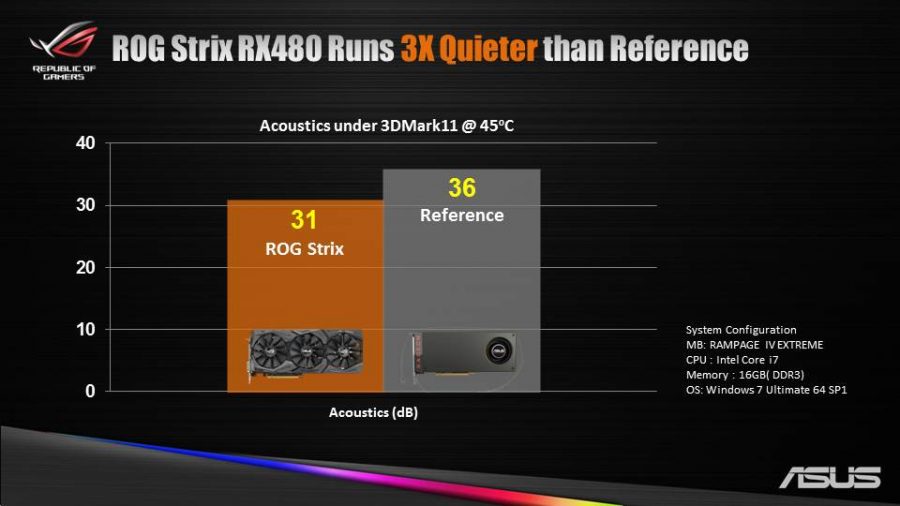 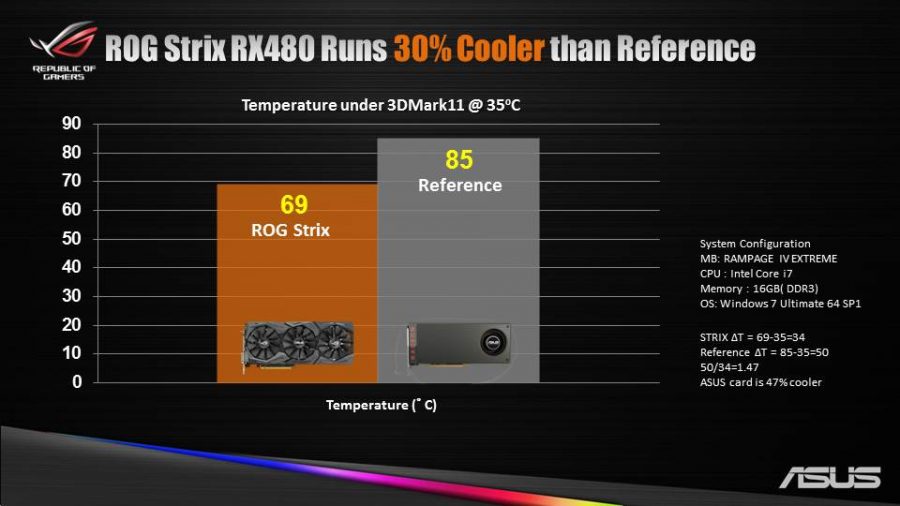 FanConnect technology incorporates two 4-pin GPU-controlled headers on the graphics card, allowing you to control dedicated case fans to cooling the area around the graphics card specifically. Using the software is as easy as one-two-three. 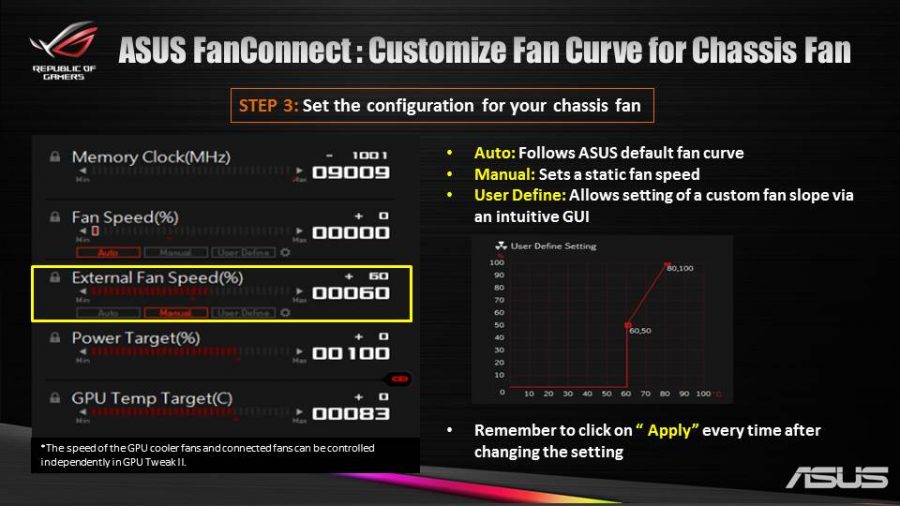 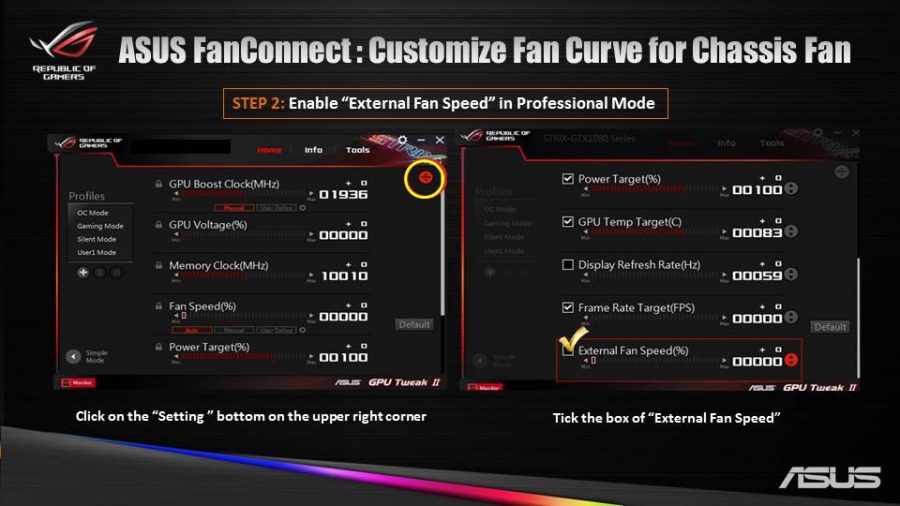 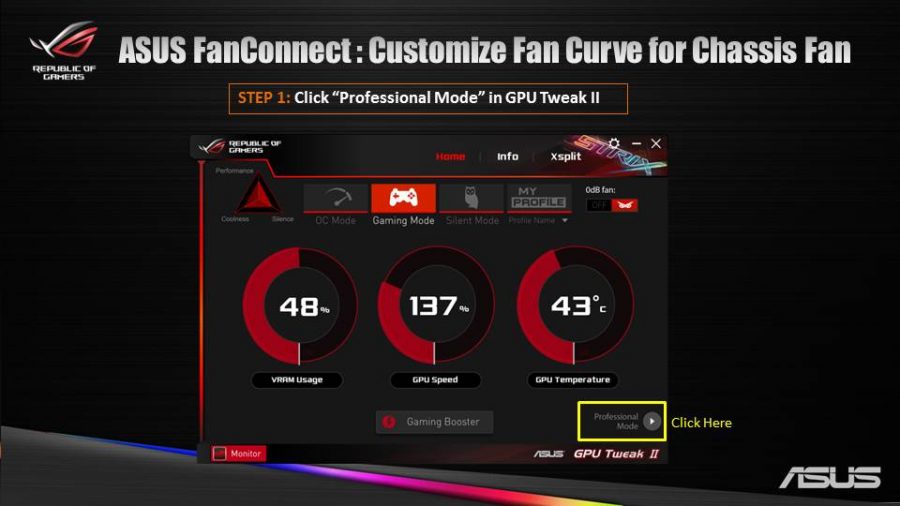 Power to the People

Power allocation has been redesigned compared to reference. ROG Strix RX 480 with the use of a custom VRM (voltage regulator module) and PCB (printed circuit board) draws 100% of the GPU power from the 8-pin PCIe power connector (rather than splitting the load between the connector and the PCIe slot). Such a design ensures that the PCIe slot specifications for power consumption is not breached (the card may throttle otherwise). 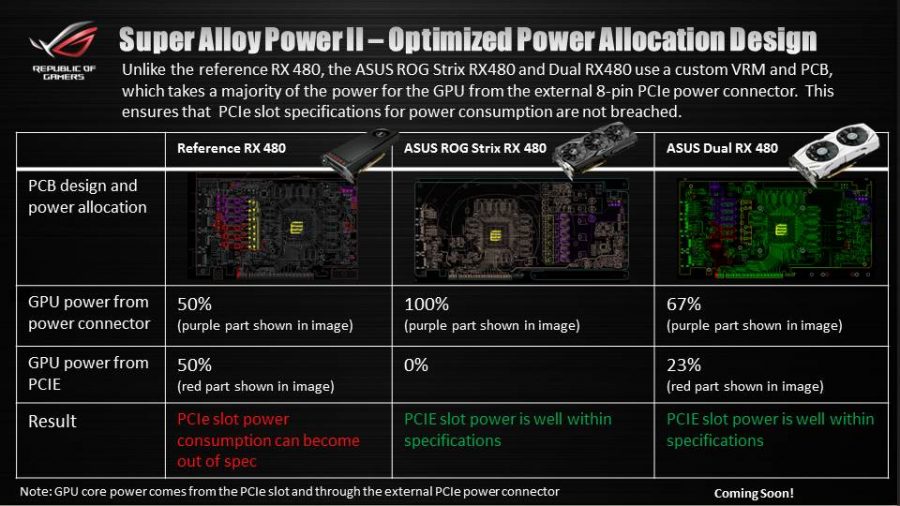 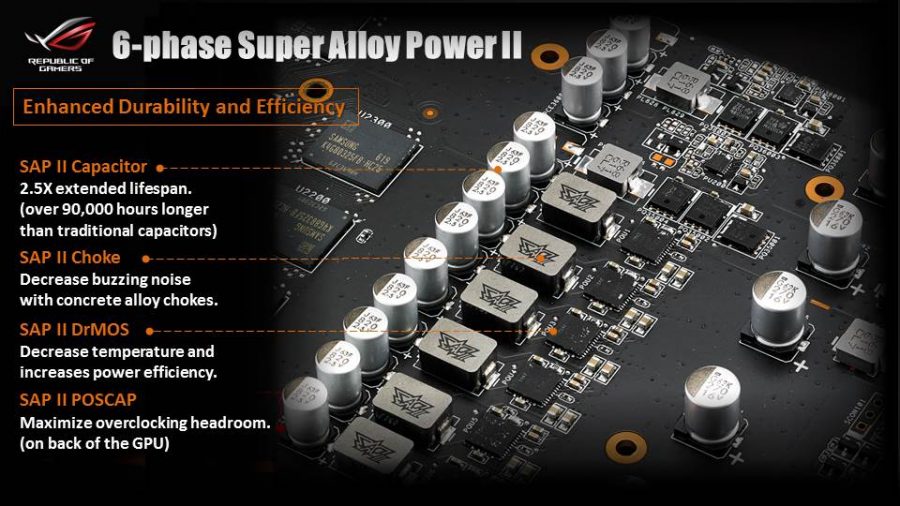 * For those with a keen eye, yep another one is coming soon!

Fire it up, Light em up!

While the matte black finish blends in with almost any PC build, ROG Strix RX 480 is pimped out with AURA RGB lighting. You can match the color perfectly with whatever theme you’re into, whether classic ROG red (probably the best), Pokemon yellow, or Hello Kitty pink (we know you love it, don’t deny it). From some feedback we received, we included the off function in case you love the Batman theme. 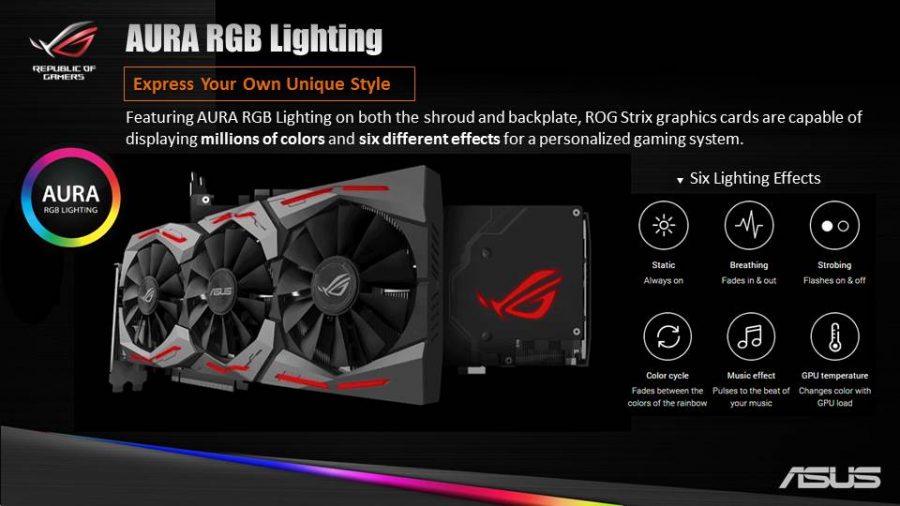 VR (for Vanquish with ROG) 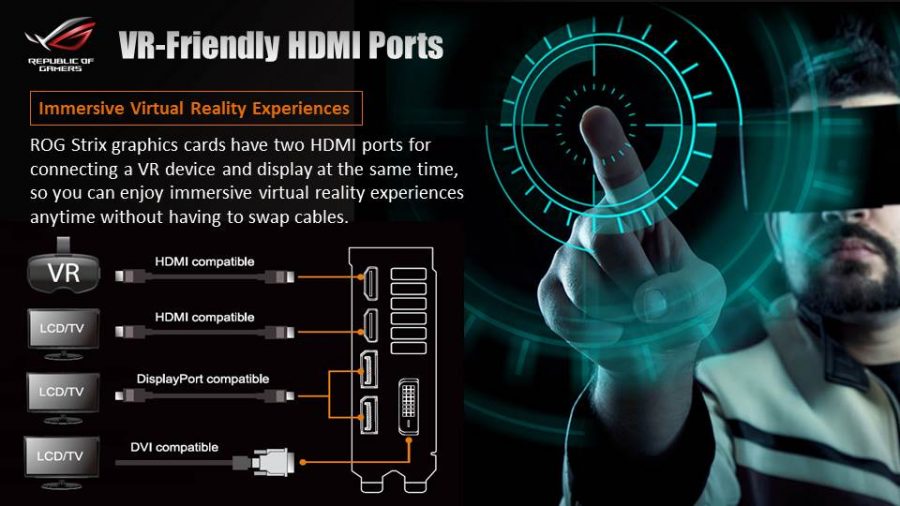 Besides having the power to power VR gaming, the ROG Strix series of graphics cards are the only ones with a dedicated HDMI port for VR, rest assured you won’t be having any problems connecting up a VR set if you already have an HDMI monitor connected. There are two DisplayPort 1.4, two HDMI 2.0 and a DVI-D port. AMD FreeSync will make sure you’re getting smooth gameplay when using supported gaming monitors such as MG248Q, MG28UQ or MG24UQ.

GPU Tweak II will provide easy one-click overclocking and XSplit Gamecaster is also included to stream or record gameplay.
Tweaking the performance is made easy with one-click tuning, or use the professional mode made for advanced users.
Squeeze out every bit of performance you can get using Memory Defragmentation to free up more system memory, tweak Visual Effects in Windows, and manage services or process running in the background using System Services. 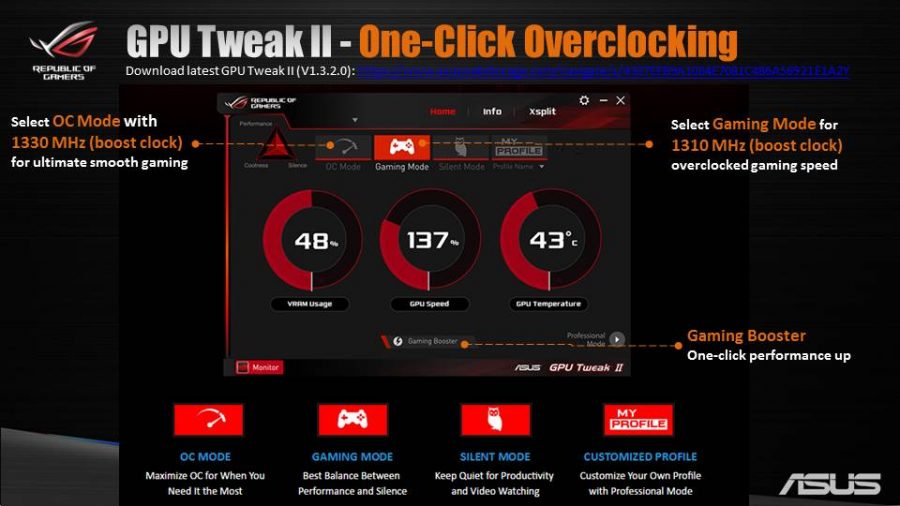 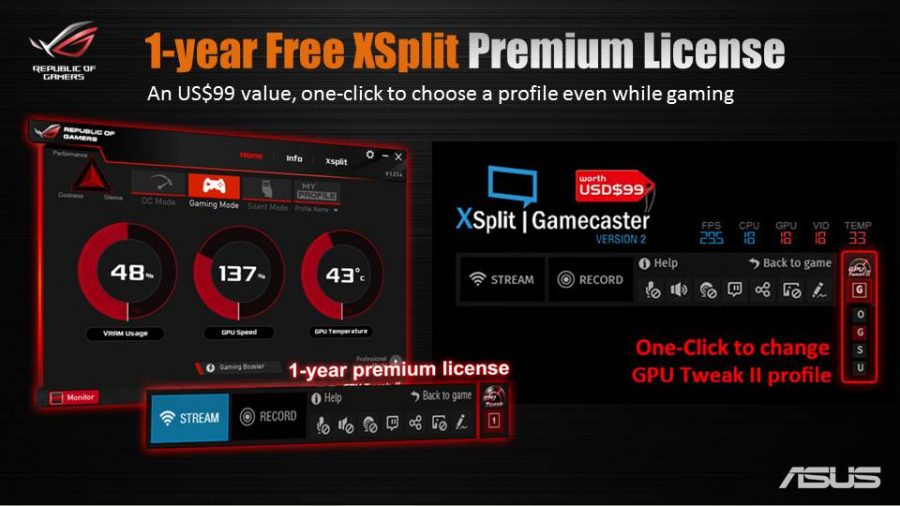 Getting a new graphics card is not always about a simple hardware upgrade, ROG Strix RX 480 is the whole package to get you playing the games you want. By doing a bit of research, you’ll find that a pair of these will provide staggering performance in the latest AAA games. At this price, with 8GB of GDDR5, why not?! 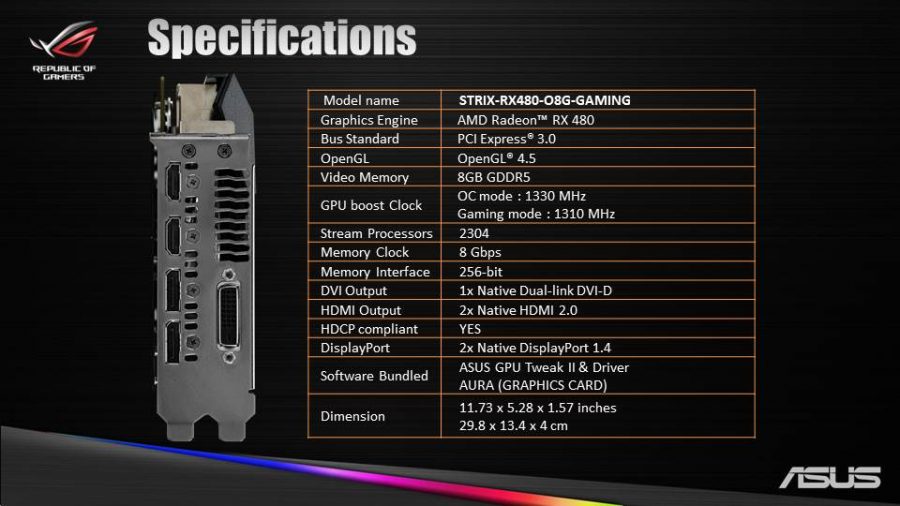