I hope I don’t have to remind you that our Rumors series are called rumors for a reason. It basically contains all information we can find, but it does not necessarily mean it’s anyhow confirmed. If you’re interested..  buckle up.

It appears that the leak about imminent launch of GeForce GTX 1060 is  no longer just a leak. Polish website called PurePC decided to spill the beans about GTX 1060 review samples:

Of course there’s a review sample of the latest card from the ‘Greens’ — GTX 1060 — at our office already. So get ready for another tests.

As you might have heard, there are two variants of GTX 1060 coming. The 6GB and 3GB version. However what you might have missed is the fact that at least one of those variants will not support SLI. What’s also interesting is that both of these cards are using separate driver names (unlike for instance, RX 480), which could further confirm that GTX 1060 is indeed using two different GP104 variants (GP106-400/300).

I only spoke with 2 sources about this, and it appears that it is 3GB model that would not support SLI. I think it makes a lof of sense, as 3GB SLI is probably not the most capable solution, considering how frame buffer is shared between the chips, and of course there’s a ‘problem’ of the price. Not only GTX 1060 3GB would be cheaper than 6GB model, but it would also be very close to single GTX 1080 in terms of performance when SLI’ed, so it could potentially affect the sales of high-end Pascal. However, this is just my theory based on what I’ve heard.

The third rumor for today came from Korean retailer. This table shows products that will take part in Overwatch bundle promotion between June 28th and August 31st. First column shows available products, second column describes quantity of available products and third column mentions how many sets of Overwatch themed stuff will be added for those purchases. Finally, the last paragraph says GTX1060 Series  are coming soon. I don’t have a link, but I was told it’s from Facebook. 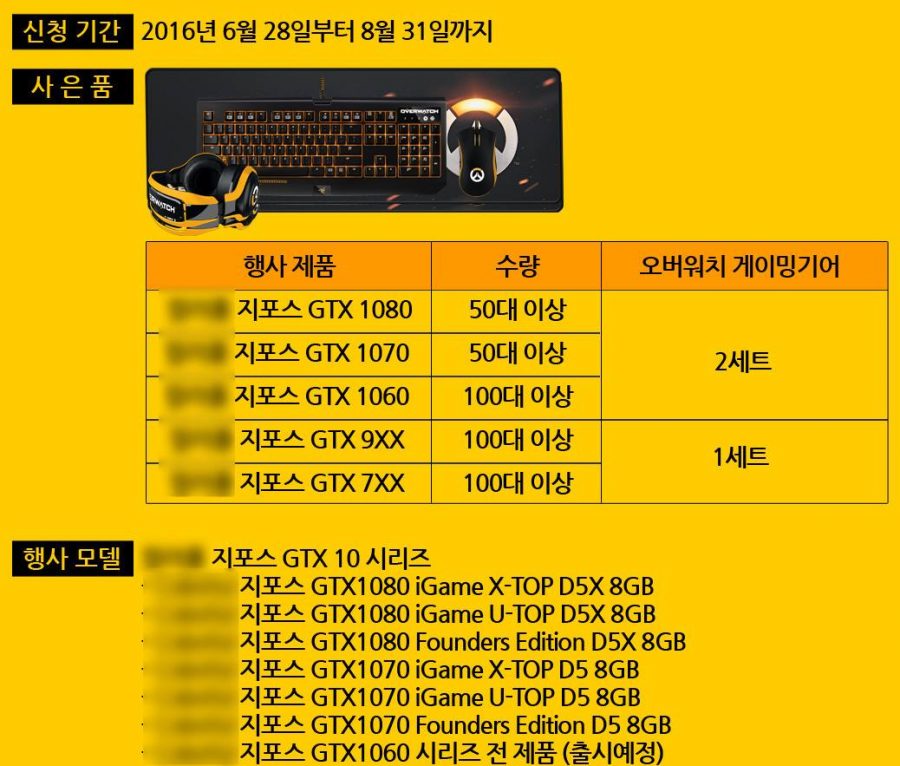 We will have more about GTX 1060 in the coming days.