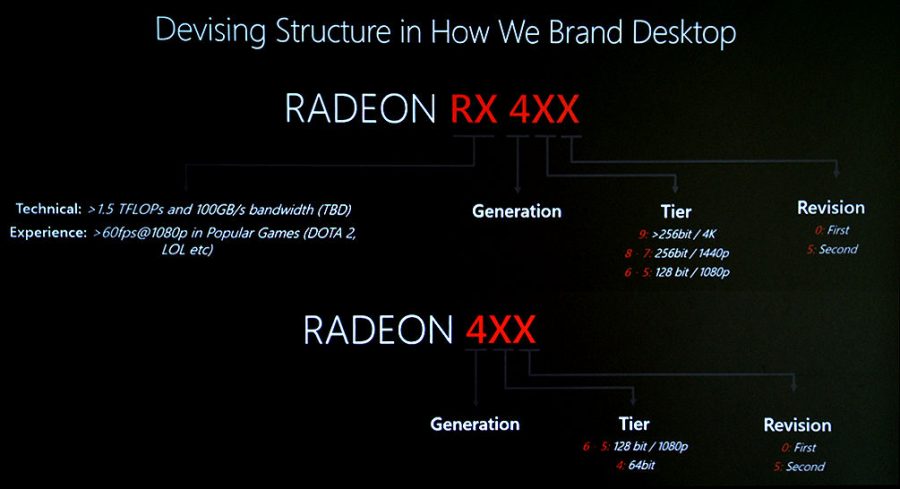 Let’s start with the RX. There are two subseries in Radeon 400 stack, the RX 400 and 400. The RX parts will offer >1.5 TFLOps performance and at least 100 GB/s of memory bandwidth. Those cards that do not offer such performance will not use the RX prefix.

AMD confirmed they will be using XX5 revisions, which basically means we might be seeing faster variants released after time, when yields are better, leakage was minimized, or AMD simply decided to release higher-clocked version. A good example would be Radeon HD 7970 and 7970 GHz Edition (being 2nd revision). Hopefully this will also mean less rebrands.

AMD differentiates 9 tiers which are gathered into 5 groups. Interestingly Tier 6 (46X cards) might use RX prefix or not. I was hoping we could at least get rid of the tier mixing, but this confirms there might be RX 460 and non-RX 460.

Of course our attention was quickly put on Tier 9. According to AMD description, Radeon RX 490 and RX 495 cards would be designed for 4K resolution with memory bus exceeding 256-bits. So if the rumors about Vega 10 being used for Radeon RX 490 series are true, then we at least know it’s designed for 4K.

The rest is self explanatory. I made this chart to show you all possible variants of Radeon 400 series, and which tier they belong to.