Interesting article was just posted over at LaptopMedia. According to the website, NVIDIA is already looking forward to replace Geforce GTX 950M and 960M with their new Pascal graphics cards.

So you might’ve noticed that we are talking about notebook chips, yet there’s no M postfix for GPU codenames. The reason behind this change is NVIDIA’s new philosophy for mobile GPU performance. Back in 2014, NVIDIA decided to decrease the gap between mobile and desktop parts for models that share the same codenames. Not long after this slide was made for GTX 980M, GTX 980 for notebooks was released, which basically aligned with desktop part in terms of performance. 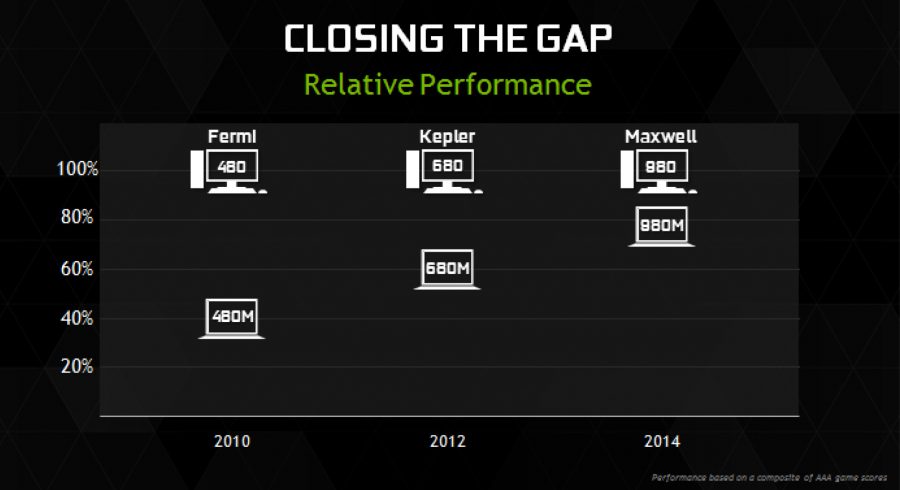 If this approach was to be kept for GeForce 10 Series, all mobile parts would offer the same performance as their desktop variants.

That said, the latest driver leak or PCGamer rumors might actually be true. NVIDIA might drop the M postfix for all mobile chips. But how do we know if mid-range and entry-level cards will also get rid of the ‘M’? Well, we don’t know yet, but the latest story from LaptopMedia seems to confirm this rumor.

According to their article NVIDIA will launch two cards:

Assuming that this rumor is correct, the interesting part here is the appearance of Ti brand for notebooks. So far NVIDIA only had the opportunity to use xx5M (eg. 965M) parts or xxxMX (eg. 980MX). The Ti would likely replace both of these options.

So right we are aware of four mobile GeForce 10 parts:

All these cards would launch somewhere around early August.