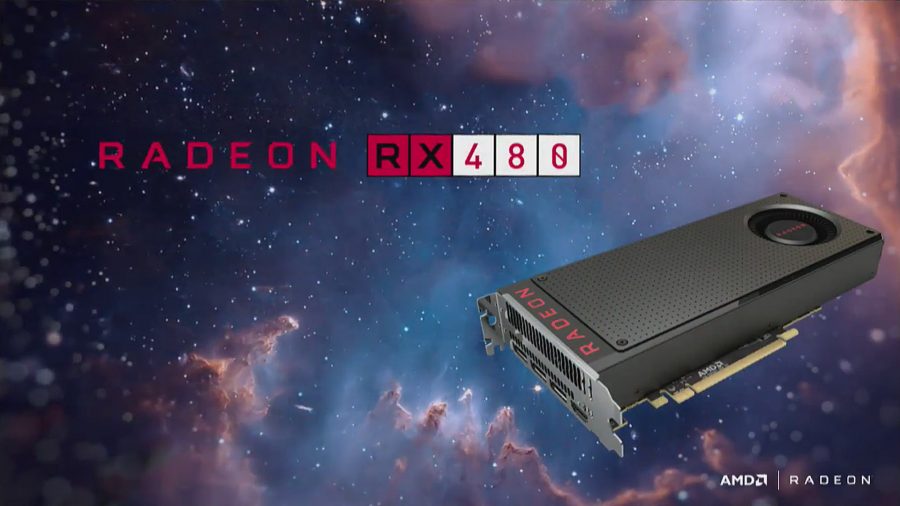 New card features 36 CUs (2304 Stream Cores). It is equipped with 4 or 8GB GDDR5 memory across 256-bit interface. The TDP is rated at 150W, and card is powered through single 6-pin power connector. Radeon RX 480 is equipped with 1.3 DisplayPort with HDR support.

AMD Radeon RX 480 is designed to offer good performance in the most popular titles (like Battlefield 1 or Doom). Doom developers were pleased to see affordable solution that enables good experience at very low price.

According to multiple editors (who took part in Polaris Tech Day) Radeon RX 480 would offer performance between GeForce GTX 970 and GTX 980. 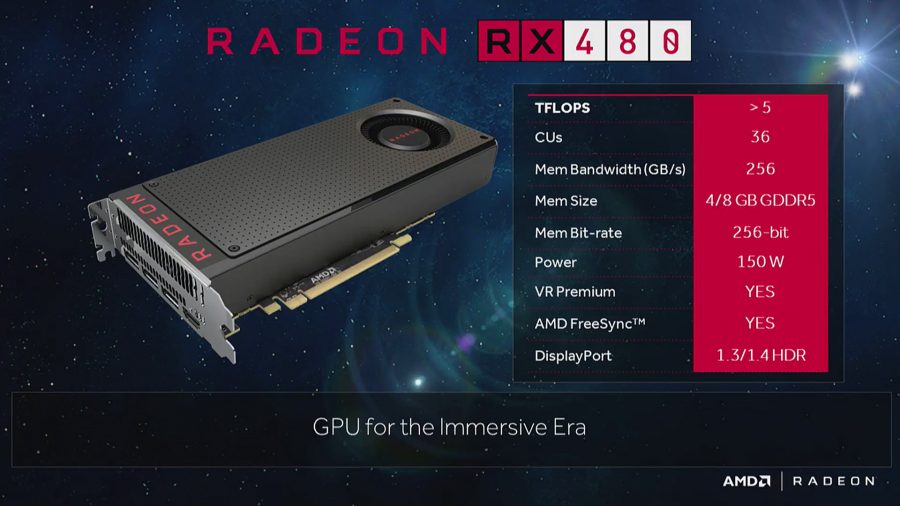 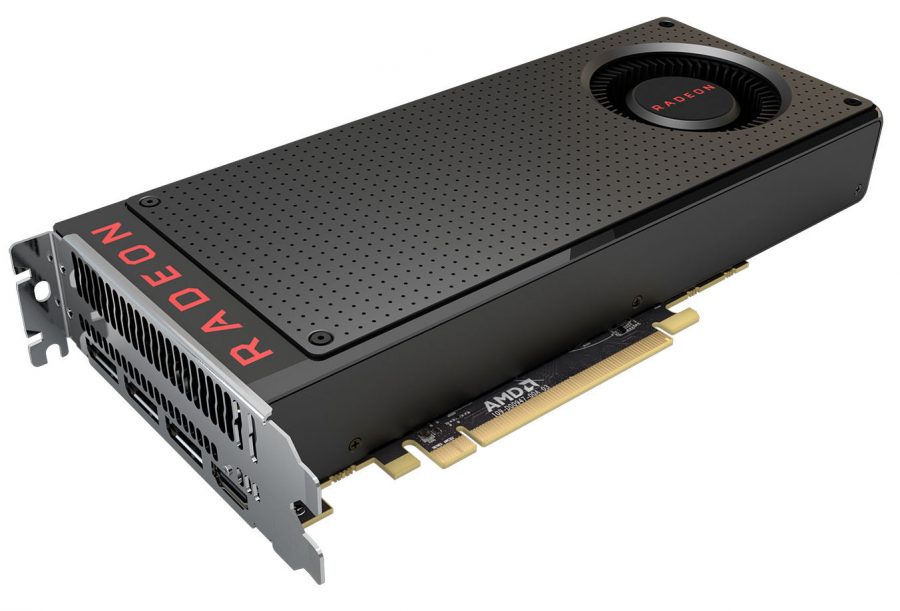 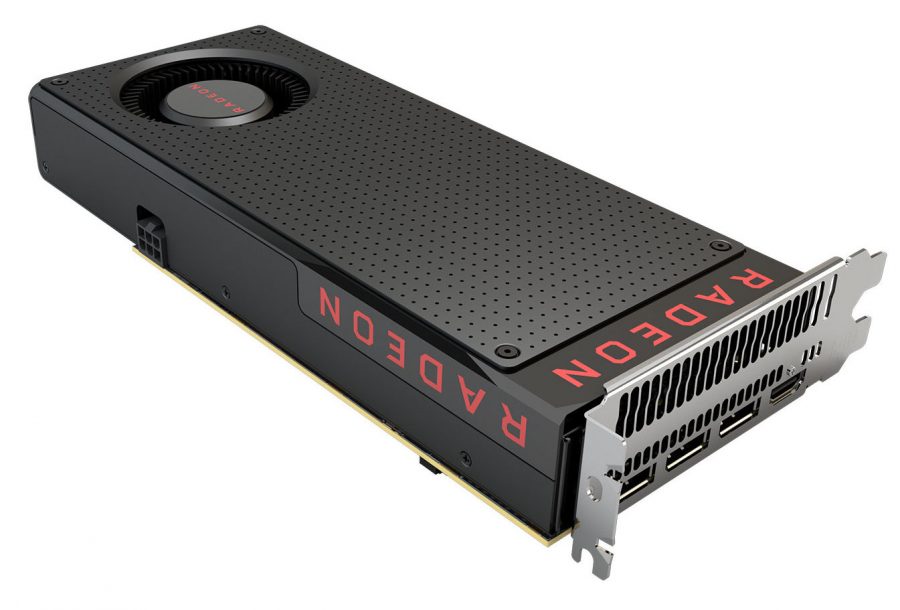 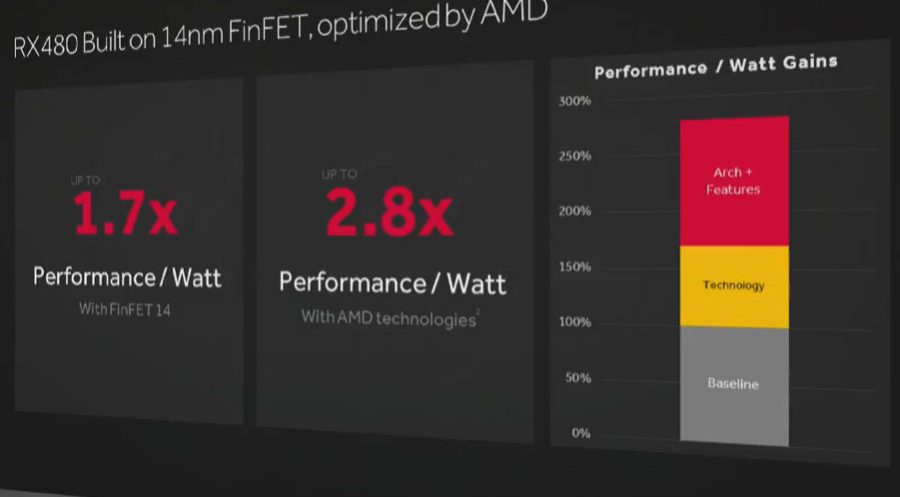 AMD has unveiled that CrossFire RX 480 configuration will cost less than 500 USD while offering better performance in DX12 applications. 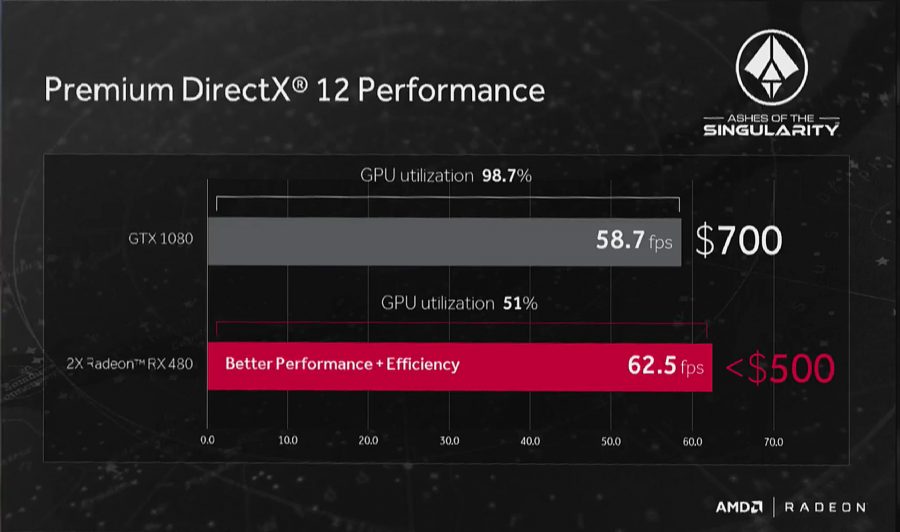 Radeon(TM) RX 480 Set to Drive Premium VR Experiences Into the Hands of Millions of Consumers; Starting at Just $199

Set for launch and availability on June 29th, the Radeon™ RX 480 will deliver the world’s most affordable solution for premium PC VR experiences, delivering VR capability common in $500 GPUs.

“VR is the most eagerly anticipated development in immersive computing ever, and is the realization of AMD’s Cinema 2.0 vision that predicted the convergence of immersive experiences and interactivity back in 2008,” said Raja Koduri, senior vice president and chief architect, Radeon Technologies Group, AMD. “As we look to fully connect and immerse humanity through VR, cost remains the daylight between VR being only for the select few, and universal access for everyone. The Radeon™ RX Series is a disruptive technology that adds rocket fuel to the VR inflection point, turning it into a technology with transformational relevance to consumers.”

In a notable market survey, price was a leading barrier to adoption of VR.2 The $199 starting SEP for select Radeon RX Series GPUs is an integral part of AMD’s strategy to dramatically accelerate VR adoption and unleash the VR software ecosystem. AMD expects that its aggressive pricing will jumpstart the growth of the PC VR TAM and accelerate the rate at which VR headsets drop in price:

“The Radeon™ RX series efficiency is driven by major architectural improvements and the industry’s first 14nm FinFET process technology for discrete GPUs, and could mark an important inflection point in the growth of virtual reality,” said Patrick Moorhead, principal analyst, Moor Insights & Strategy. “By lowering the cost of ownership and increasing the VR TAM, Radeon RX Series has the potential to propel VR-ready systems into retail in higher volumes, drive new levels of VR content investment, and even drive down the cost of VR headsets.”

“We congratulate AMD for bringing a premium VR ready GPU to market at a $199 price point,” said Dan O’Brien, vice president of virtual reality, HTC. “This shows how partners like AMD survey the entire VR ecosystem to bring an innovative Radeon RX Series product to power high end VR systems like the HTC Vive, to the broadest range of consumers.”

“We’ve seen an incredible range of immersive applications and game-changing experiences that have given millions of people around the world their first taste of virtual reality,” said Nate Mitchell, VP of Product, Oculus. AMD is going to help drive that adoption forward even more by bringing their high-end VR GPUs to the $199 price point.”

This press release contains forward-looking statements concerning Advanced Micro Devices, Inc. (“AMD”) including, among other things, AMD’s strategy for its upcoming Polaris architecture-based Radeon™ RX Series graphics cards, the features, functionality, benefits, pricing, timing, expectations and availability of AMD Radeon RX Series graphics cards; the expectation that AMD Radeon RX Series graphic cards and pricing can jumpstart the growth of the addressable market for PC VR and accelerate the rate at which VR headsets drop in price; the expectation that affordable AMD Radeon RX Series graphics will drive a wide range of VR-ready desktops and notebooks, providing a catalyst for the expansion of the addressable market to an estimated 100 million consumers over the next 10 years; the ability of the AMD Radeon RX series of graphics cards to enable OEMs to build ideally priced VR-ready desktops and notebooks suited for the retail PC market; the expectation that the adoption of PC VR technologies by mainstream consumers will spur further developer interest across the ecosystem; the expectation that affordable PC VR enabled by Polaris architecture-based graphics cards will accelerate the pace of the VR ecosystem, ultimately resulting in a lower cost of entry to VR; the ability of the Radeon RX Series graphics cards to benefit from the opportunity in PC gaming, which are made pursuant to the safe harbor provisions of the Private Securities Litigation Reform Act of 1995. Forward-looking statements are commonly identified by words such as “would,” “may,” “expects,” “believes,” “plans,” “intends,” “projects” and other terms with similar meaning. Investors are cautioned that the forward-looking statements in this document are based on current beliefs, assumptions and expectations, speak only as of the date of this document and involve risks and uncertainties that could cause actual results to differ materially from current expectations. Material factors that could cause actual results to differ materially from current expectations include, without limitation, the following: the possibility that Intel Corporation’s dominance of the microprocessor market and its aggressive business practices may limit AMD’s ability to compete effectively; AMD relies on GLOBALFOUNDRIES Inc. (GF) to manufacture all of its microprocessor and APU products and a certain portion of its GPU products, with limited exceptions. If GF is not able to satisfy AMD’s manufacturing requirements, its business could be adversely impacted; AMD relies on third parties to manufacture its products, and if they are unable to do so on a timely basis in sufficient quantities and using competitive technologies, AMD’s business could be materially adversely affected; failure to achieve expected manufacturing yields for AMD’s products could negatively impact its financial results; the success of AMD’s business is dependent upon its ability to introduce products on a timely basis with features and performance levels that provide value to its customers while supporting and coinciding with significant industry transitions; if AMD cannot generate sufficient revenue and operating cash flow or obtain external financing, it may face a cash shortfall and be unable to make all of its planned investments in research and development or other strategic investments; the loss of a significant customer may have a material adverse effect on AMD; global economic uncertainty may adversely impact AMD’s business and operating results; and the markets in which AMD’s products are sold are highly competitive; and uncertainties involving the ordering and shipment of AMD’s products could materially adversely affect it. Investors are urged to review in detail the risks and uncertainties in AMD’s Securities and Exchange Commission filings, including but not limited to AMD’s Quarterly Report on Form 10-Q for the quarter ended March 26, 2016.

1. Statement of “future-proof” refers to support of current and upcoming technology standards including 14nm FinFET process technology, DirectX®12 and Vulkan™ API support, new display technology, and experiences such as VR. “Future-proof” statement is not meant to serve as a warranty or indicate that users will never have to upgrade their graphics technology again. Support of current and upcoming technology standards described above has the potential to reduce frequency of graphics upgrades for some users.

3. Based on internal AMD analysis.

6. 13 million PCs worldwide next year will have the graphics capabilities needed to run VR according to Gartner as cited inhttp://www.bloomberg.com/news/articles/2015-12-30/few-computers-are-powerful-enough-to-support-virtual-reality.