Look what I found in the latest press release from Gigabyte..

The graphics card in the middle was not released by Gigabyte as of yet. Even the press release says nothing about this card. It does however mention GTX 1080 XTREME GAMING that is shown on the left side.

The new card spotted in this picture is most likely GeForce GTX 1080 XTREME Hybrid, a successor to GX 980 Ti HYBRID, which you can see on the photo below. As you can see it does look quite similar except the window is accompanied by LED illuminated X-logo, similar to XTREME GAMING. I think it’s plausible to expect both cards to share the same PCB.

Hopefully Gigabyte will release more info about this card at Computex. 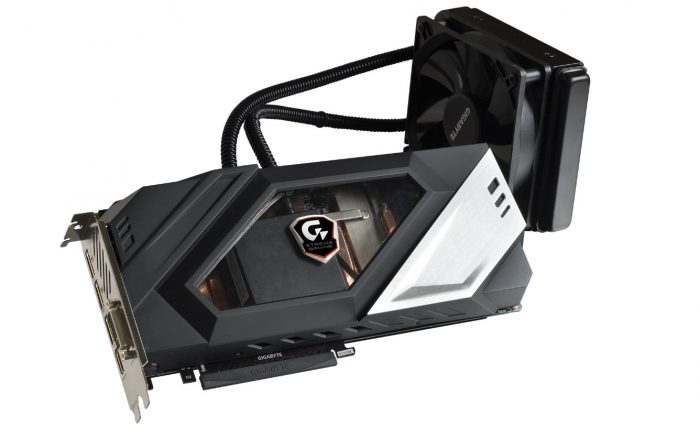 Taipei, Taiwan – May 30, 2016 – GIGABYTE, a leading manufacturer of motherboards and graphics cards, is set for COMPUTEX TAIPEI 2016 with a strong emphasis on gaming. Visitors are invited to embark upon a gaming journey this year with GIGABYTE led by XTREME GAMING.

GIGABYTE’s emerging gaming series, XTREME GAMING is created for providing the ultimate gaming hardware and gears that meet the true demands of gaming enthusiasts who dare to challenge their limits. A full range of new XTREME GAMING products are ready to unveil in front of the worldwide audience. XTREME GAMING will also showcase its innovation and spirits through the exhilarating VR experience at this year’s gaming-centric booth highlighted by the color scheme of XTREME GAMING in black and orange.

GIGABYTE is going to showcase the just-released GTX 1080 G1 GAMING graphics card, as well as to reveal its XTREME GAMING edition card for the first time. Powered by the next-gen Pascal GPU, these flagship cards of 2016 are ready to take on any next-generation games at extreme resolutions.

The GTX 1080 G1 GAMING combines the legendary WINDFORCE 3X cooling system for an excellent heat dissipation capacity to bring out the best of Pascal, while keeping the card cool and quiet. Gamers could also fully customize the lighting with the newly RGB feature.
The XTREME GAMING edition is expected to wow the crowd at COMPUTEX with brand new GIGABYTE innovative cooling technologies incorporated in the card design. The graphics card is also engineered for virtual reality with unique VR-friendly features to optimize VR gaming experience.