Today we have final specifications of GeForce GTX 1080.

NVIDIA GTX 1080 is the first graphics card from GeForce 1000, or as NVIDIA calls it 10 Series, based on 16nm FinFET architecture called Pascal. New card is clocked at 1607 MHz with boost clock up to 1733 MHz, however actual clock will vary depending on application.

NVIDIA GTX 1080 is equipped with one 8-pin power connectors and TDP is rated at 180W, and from what I heard, actual power consumption should not exceed this value in gaming.

NVIDIA GeForce GTX 1080 has 160 TMUs and 64 ROPs. This was actually confirmed earlier by GPU-Z update, but today our knowledge is based on official GPU diagram, which looks like this: 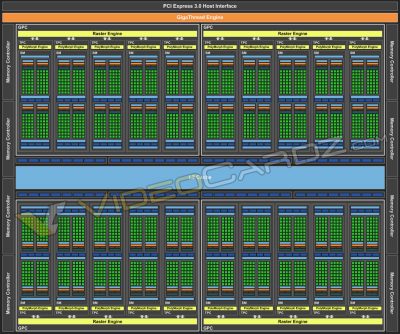 As you can see Pascal GP104 is split into four blocks (Graphics Processing Clusters), each GPC has 5 Streaming Multiprocessors and each SM has two blocks of 64 CUDA cores, so this gives us total of 2560 CUDA Cores. As a side note, GP100 only has one block of 64 CUDAs per SM.

The die area of GP104 GPU is 314 mm2, which is right in-between GM204 and GM206. Despite smaller GPU we have 2 billion transistors more than GM204. Also the density of transistors increased by 10 million per mm2 to almost 23 million.

NVIDIA GeForce GTX 1080 is the first commercial graphics card to utilize GDDR5X memory. This technology enables higher bandwidth on shorter interfaces, and since GP104 is equipped with eight 32-bit memory controllers (total of 256-bit), the maximum bandwidth should oscillate at around 320 GB/s. This value comes from very high memory frequency which is 1250 MHz (10 GHz effective).

Pascal GP104 brings new memory compression technology. Fourth Generation Delta Color Compression is said to deliver 1.7 times of GTX 980 effective bandwidth. However without NVIDIA’s own tools this value is impossible to confirm and probably should be taken with a grain of salt.

NVIDIA GeForce GTX 1080 also brings new technology called Fast Sync. We can’t give you any details right now, but judging from the graphs, this technology allows much faster frame rendering (30-40ms) compared to Vsync (90-110 ms). My understanding is that this technology is trying to bring better user experience in VR by replacing VSync.

GeForce 10 Series based on Pascal architecture also deliver new connection method for multi-GPU configurations. By utilizing both SLI fingers new bridge delivers higher throughput between GPUs. This technology will improve experience at higher resolutions. In fact NVIDIA even has its own recommendation table for those looking into GTX 1080 SLI:

During official presentation Jen-Hsun Huang said that GTX 1080 is faster than GTX 980 SLI. This is true but only when Virtual Reality is considered. In real world gaming scenario performance is almost comparable (this will be confirmed by reviews), but it is definitely not faster, at least not in all games.

If you are confused what Simultaneous Multi-Projection really is, then this slide should give you a straight answer. Think of this as a technology that saves GPU from rendering pixels that would not even be displayed in the final picture. Geometry is applied before final image is fully rendered, as opposed to applying geometry after picture ends its route in rendering pipeline. 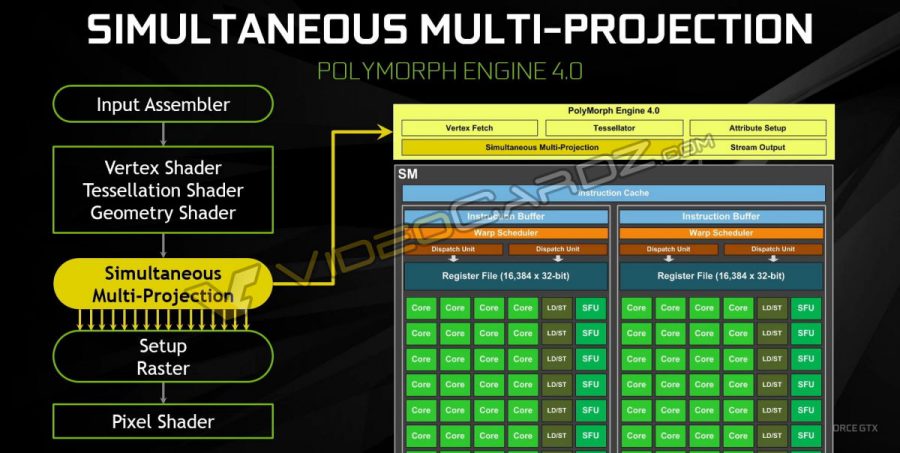