You might be thinking why is this important if specifications were already released by NVIDIA. Well first thing we learn from this screenshot is Device ID. This ID (1B80) is the easiest way to check if GPU-Z screengrab is real, and since this is actually second time we see this ID, we are more than sure that this is real.

The other thing that comes with this leak is confirmation of TMUs and ROPs. But don’t get too excited just yet. GPU-Z does not magically count those units on its own, it has to be programmed properly. GPU-Z may still need to updated for Pascal cards to show correct values, but for now it’s safe to assume that GTX 1080 has at least 160 Texture Units (2560/16 = 160, probably correct) and 64 ROPs (may not be correct).

UPDATE: TechPowerUP GPU-Z was updated to 0.8.8 (download here), with full support for GTX 1080. That said, those specs are considered as official: 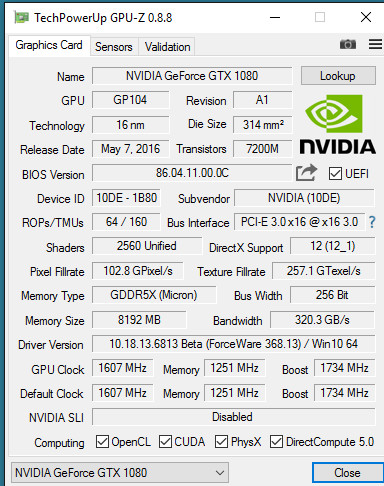