According to NVIDIA mass production of GP100 silicons has already started. Meanwhile, less powerful chips including GP104, GP106 and GP107, which will become a core of GeForce 1000 series, are not yet officially discussed by the company.

At GTC 2016 Jen-Hsun Huang, the CEO of NVIDIA, realized that showing Maxwell chips instead of Pascal may have some funny consequences. The spy cameras are always zoomed in to show all details of any device that is shown on stage. This time Jen-Hsun presented the real Drive PX 2 module, it was definitely equipt with new Pascal GPUs, however it was only for a very brief moment and many journalists missed the opportunity to take better pictures. Later, the same board was hidden under translucent box in NVIDIA’s booth, but it was presenting Tegra side instead of the back with MXM boards.

Still, some journalists tried to take pictures at any angle possible, just to catch more details on new Pascal GPU. This is how Hardware.fr and Heise.de teams brought us some material to work with. 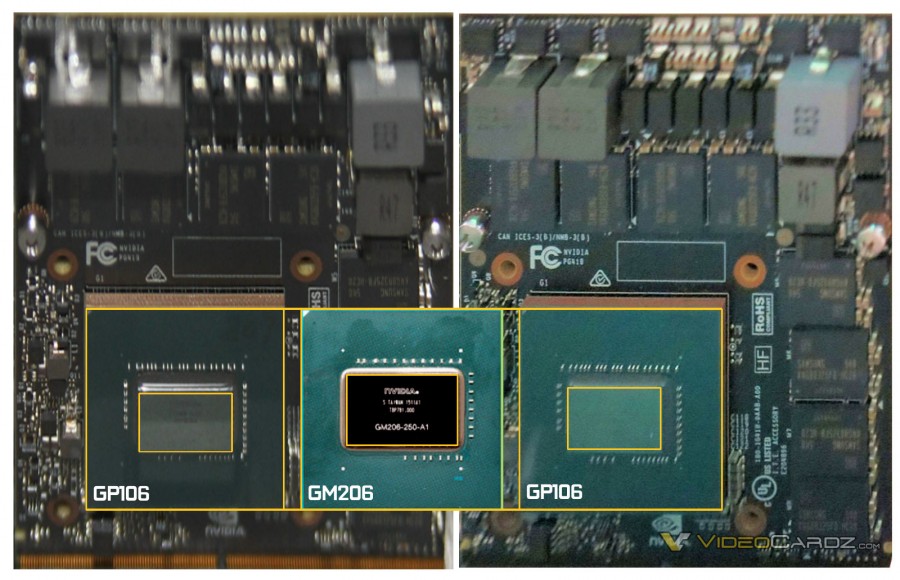 First we learn that the new board called PG418 is not desktop solution. It’s Pascal-based MXM module. This could be either new GeForce GTX 1060M or some fancy Quadro chip. I think this is GP106 for two reasons. First of all this chip is simply too big to be GP107. Secondly I don’t remember any GM107 based card in MXM format, so it’s unlikely that its successor would need it.

To give you some idea how Pascal GPUs could look on the inside, look at the diagram below. The rectangular nature of this GPU could suggest that we have two Graphics Processing Clusters right next to each other. If both of them have 5 streaming multiprocessors, then according to how Pascal architecture the full chip should have 1280 CUDA cores.