During PCPerspective’s interview Raja Koduri was asked why they changed the name of Radeon R9 Fury X2 to Radeon Pro Duo, and  why was product positioning changed to something more than just a Radeon gaming card.

The main idea behind AMD Radeon Pro Duo, the first Radeon product with FirePro capabilities, was ‘to get past CrossFire’, as we are on the brink of new DX12 and Vulkan APIs becoming popular. His point is that in modern APIs multi-GPU configuration are no longer seen as separate entities, since two or more cards can act as one. CrossFire needs more support and it’s not always easy to implement in developing tools. With Pro Duo, everything will handled ‘on board’.

According to Raja Koduri, Radeon Pro Duo is ‘the product for gamers who create and creators who game’. Still, the main focus was on developers, especially the VR developers. Pro Duo is the initial product for AMD’s new VR Ready Creator line.

Radeon Pro Duo is meant to help developers in the next 12 months to leverage all benefits from new APIs by creating new content and pushing new standards further. This is crucial for AMD market position in the next few months as we get closer to Polaris launch.

Although AMD has not revealed any spec sheet for Pro Duo, we can extrapolate some data from the slides. The GPU has 16 TFLOPs single-precision computing power. Assuming it has two full Fiji GPUs the clock speed can vary from 975 to 1000 MHz.

Pro Duo’s PCB is different from what we saw at AMD300 event when Lisa Su has shown the first dual-Fiji board on stage. Pro Duo board has been upgraded with more power phases. The so called Fury X2 had 15 power phases, while Pro Duo has 18. Of course the changes are much more complex and the whole board has been completely modified, in fact this is a completely different board. Additionally the PCB has been upgraded with additional 8pin power connector, so the Pro Duo requires three connectors for operation. AMD has confirmed that Radeon Pro Duo TDP is 350W.

It’s worth noting that AMD Radeon Pro Duo is officially equipped with four DisplayPort connectors, there is no word about any bundled adapters, so it may depend on who will be selling these cards, AMD directly or AIBs.

However, if you look closely at the pictures you will notice that one connector is in fact HDMI, which makes sense if this is card is designed for Oculus/HTC developers (HMD require HDMI). So either this is just a mistake or there are two variants.

AMD Radeon Pro Duo has 8192 Stream Processors and 8GB HBM memory. This is in fact the first ever dual-GPU card with HBM memory. Never before has High-Bandwidth-Memory been used in workstation graphics cards, and developers are eager to test it with new tools designed by AMD for Autodesk and other software (as shown during Capsaicin event).

The cooling solution looks oddly familiar to  Radeon R9 Fury X’s. However the secret lies under the hood, where much more sophisticated cooling pump has been installed. Whether this is just one pump or two working together remains a secret till AMD decides to release more information. What we know for is that there is just one external fan installed on 120mm radiator.

AMD Radeon Pro Duo is planned for availability in Q2 2016. The price for this dual-GPU monster is $1499, which will certainly not help to popularize this product among gamers.

The future for AMD depends hugely on DX12 and Vulkan popularity. In the next few years FinFET-based product will be much more common. According to Koduri, FinFET allows much cheaper production of lower-end chip. The sooner modern APIs become popular the better for Polaris, Vega and Navi products. That’s because AMD will focus on mid-range segment, the so-called sweet spot where the most products are sold, although they are still committed to deliver new enthusiast chips.

Polaris naming is time based. In other words, although it may seem Polaris 11 (the mid-range chip) and Polaris 10 (the high-end chip) both share similar approach as NVIDIA’s  GM206,204,200 in terms of performance, these number actually don’t mean anything.  Koduri revealed that if AMD was ever to make even higher-end product, then Polaris numbers will certainly go up. That said, if Polaris 10 was to get a replaced with faster chip, it would certainly be called Polaris 12 or something above.

With Polaris 10 and 11 AMD is trying to reach as many segments as possible. Koduri promised that we are going to be pleased and surprised with the positioning of these cards. This could either mean cheaper cards or more diversity in their portfolio.

Koduri said that they are working to deliver new graphics ‘as soon as they can’, and they have teams working very very hard to make it happen.

Raja Koduri also said there no specific date to be revealed of when Polaris Radeon 400 will be released, but he is looking forward to ‘drink another beer at the announcement of Polaris’. 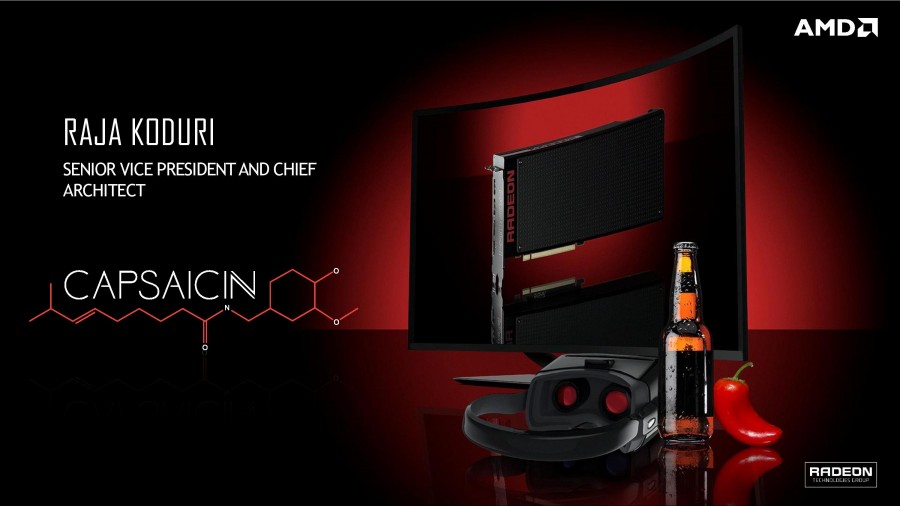 AMD Polaris will not have HBM2 parts

When asked about the GPU roadmap and missing HBM2 under Polaris, Koduri said that we can ‘connect the dots by ourselves’. He also said that AMD wants to deliver HBM2 products when new memory standard is ready. That said Polaris will not get HBM2.

According to the roadmap First HBM2 equipped products will arrive with VEGA architecture, early next year. Vega will be followed by Navi which is said to deliver Nextgen Memory and Scalability. However Koduri did not explain what those buzzwords mean during Capsaicin.

I just wanted to say few words about the event itself. It was much better than R9 285 and AMD300 announcements, which were overfilled with slides and talk about the technology. Interestingly whenever the interview started the viewer count dropped. It means that people were not interested to hear all that stuff, or they simply joined the webcast for different information.

The presentation was divided into well thought segments. We were explained why was the event called Capsaicin and why were all those journalists and developers invited.

Despite all that I think AMD has missed the opportunity to reveal more details. Polaris 10 showcase was a complete joke and we were not even told when to expect more information. Still, it was much better than Jen-Hsun’s showcase of engineering mockups or GPU roadmaps that constantly change, so I can’t really complain that we were shown just that.

Also I think that the change to less formal presentation was a good decision.

Overall Capsaicin was a good event, but the time it took place certainly did not please most EU or Asia based viewers. The PDF presentation and video recording were not yet made public.