“We are extremely pleased at the industry’s rapid execution on the Vulkan API initiative.  Due to Vulkan’s cross platform availability, high performance and healthy open source ecosystem, we expect to see rapid uptake by software developers, far exceeding the adoption of similar APIs which are limited to specific operating systems,” said Gabe Newell, co-founder and managing director, Valve.

Vulkan is the result of 18 months in an intense collaboration between leading hardware, game engine and platform vendors, built on significant contributions from multiple Khronos members. Vulkan is designed for portability across multiple platforms with desktop and mobile GPU architectures. Vulkan is available on multiple versions of Microsoft Windows from Windows 7 to Windows 10, and has been adopted as a native rendering and compute API by platforms including Linux, SteamOS, Tizen and Android.

By placing an unprecedented collection of Vulkan-related materials into open source, including the full Vulkan conformance tests, the specification source, and a rich set of software tools, Khronos is enabling strong community participation to drive API consistency and ecosystem evolution. All Khronos open source projects are available here: https://github.com/KhronosGroup.

“Vulkan has a huge potential! We’re only scratching the surface of what can be done with it, and porting The Talos Principle to Vulkan should be seen as a proof of concept,” said Dean Sekulic graphics engine specialist at Croteam. “Vulkan in just one sentence? The endless war between performance and portability is finally over!”

Vulkan minimizes driver overhead for optimal graphics and compute performance and provides the direct GPU control demanded by sophisticated game engines, middleware and applications. Simpler, more predictable drivers provide performance and functional portability across a wide range of implementations. A key advantage of Vulkan over OpenGL is the ability to generate GPU work in parallel using many CPU cores, making Vulkan particularly useful for CPU-bound developers, eliminating a bottleneck in applications from diverse domains including games, computer-aided design and mobile apps.  Vulkan complements the traditional OpenGL and OpenGL ES APIs that provide a higher level of abstraction to access GPU functionality, which may be more convenient for many developers. Khronos will continue to evolve OpenGL and OpenGL ES in parallel with Vulkan to meet market needs.

“The Vulkan working group has been driven by more positive developer energy than any other Khronos project, resulting in the release of specifications, conformance tests, and open source SDK and compiler components in just 18 months,” said Neil Trevett, president of the Khronos Group and vice president at NVIDIA. “Vulkan does not replace traditional APIs, but it provides another choice for developers. In the right hands, Vulkan’s multi-threading and explicit resource management can enable a new class of smooth, high-performance engines and applications.”

About the LunarG Vulkan SDK

LunarG has released the first Vulkan SDK for Windows and Linux concurrently with the Vulkan 1.0 specification. The SDK includes validation layers to ensure proper Vulkan API usage and improve portability across platforms and graphics hardware. Additional layers are available for taking screenshots, tracing API activity, and running other debugging tasks. The LunarG SDK contains sample programs and documentation to help developers accelerate application development. The LunarG SDK for Vulkan is open source and freely available from LunarXchange at vulkan.lunarg.com.

“The release of the Vulkan™ 1.0 specification is a huge step forward for developers. The Vulkan API, which was derived from Mantle, will bring the benefits of low-overhead high-performance Graphics API to the benefit of cross-platform and cross-vendor targeted applications,” said Raja Koduri, senior vice president and chief architect, Radeon Technologies Group, AMD. “The promotion of open and scalable technologies continues to be the focus at AMD, as a pioneer in the low-overhead API space. As a member of the Khronos Group, AMD is proud to collaborate with hardware and software industry leaders to develop the Vulkan API to ignite the next evolution in PC game development.”

“Vulkan takes cross-platform performance and control to the next level,” said Bill Hollings of The Brenwill Workshop. “We are excited to be working through Khronos, the forum for open industry standards, to bring Vulkan to iOS and OS X.”

“We are excited to be working closely with Vulkan, and contributing in our area of expertise,” said Andrew Richards, CEO of Codeplay. “Our teams are driving forward using Vulkan and SPIR-V to provide an implementation allowing industries to develop breakthrough technologies in machine vision, big data processing and mobile applications.”

“As one of the major manufacturers for digital automotive instrument clusters and infotainment systems, Continental is delighted Vulkan finally is about to be released. Vulkan will provide a big step forward – to us as well as to the graphics community,” said Dr.-Ing. Ulrich Kabatek, principal technical expert graphic systems & 3D visualization, Continental Automotive GmbH. “As an explicit API it will allow Continental for tailored, efficient and even more high-quality graphics systems with custom safety levels. We wish Vulkan a successful first release and we are looking forward to use it for our sustainable, safe, comfortable, individual, and affordable solutions of tomorrow.”

“At Imagination we’re pleased to be a major contributor to the Vulkan project, and to have been among the first to demonstrate it on mobile platforms. Now that the specification is released, we feel that it is important to get it into the hands of developers as soon as possible,” said Peter McGuinness, director of multimedia technology marketing, Imagination Technologies. “We’re distributing a developer image for the readily available Nexus Player, which features a PowerVR Series6 GPU. Developers can also access examples and tutorials on our Vulkan resources page (https://imgtec.com/vulkan) and can look forward to Vulkan support being extended to all our tools in the very near future.”

“Linaro is deeply pleased to see the culmination of collaborative Khronos efforts to produce the Vulkan 1.0 spec. We are excited that across mobile platforms,” said Tom Gall, director, Linaro mobile group tech lead, graphics, GPGPU. “Vulkan will very quickly become an important foundation stone, as system providers and developers tune their efforts to take advantage of Vulkan’s significant advancement of the state of the art in graphics.”

“Mobica are excited by the opportunities for the graphics community with the release of Vulkan. The improved performance will deliver obvious benefits for end users. A unified API for mobile and desktop platforms will also accelerate the software development process,” said Jim Carroll, CTO at Mobica. “We are glad to have supported Khronos with the creation of this technology, and look forward to further contributions to this next key standard for graphics.”

“The Vulkan API enables developers to get the best from NVIDIA GPUs, and we are proud of our role in its development,” says Tony Tamasi, senior vice president of content and technology, NVIDIA. “We are making Vulkan drivers available for Windows, Linux, and Android platforms, on the same day as the specification launch, and we’ll continue our work within Khronos to ensure Vulkan evolves to meet industry needs.”

“Starbreeze would like to thank the Khronos Vulkan Working Group for delivering the Vulkan API to the development community,” saidEmmanuel Marquez, Starbreeze CTO. “We believe the Vulkan API will set the foundation for next generation graphics for years to come for the PC gaming industry and are proud to be a part of the project with our industry peers.”

“We are pleased to have contributed to the definition of Khronos’ new Vulkan API. Qualcomm Technologies, Inc. will be among the first to ship conformant Vulkan drivers, starting with our Qualcomm Snapdragon 820’s embedded Qualcomm Adreno 530 GPU, and subsequently with our Adreno 4xx series GPUs. Vulkan enables the next generation of graphics performance by adding multi-threaded command buffer generation and explicit control of advanced graphics capabilities within Adreno GPUs,” said Micah Knapp, director of product management, Qualcomm Technologies, Inc. “We expect to support Vulkan in the Snapdragon developer tools including Snapdragon Profiler and the Adreno SDK, to help application developers take advantage of this outstanding new API when creating graphics and compute applications for smartphones, tablets, VR HMDs and a variety of other types of devices that use Snapdragon processors.”

“Samsung is excited about Vulkan’s launch today, which will help expand the gaming ecosystem across platforms,” said Tae-Yong Kim, vice president, mobile communication business, Samsung Electronics. “We have been working within Khronos to support an open standard that will enable high performance and cutting-edge technologies. Vulkan will provide a more exciting, immersive user experience for mobile gaming.”

“As a Khronos Promoter and active member of the Vulkan definition effort, VeriSilicon welcomes the introduction of the new industry standard low-level GPU API Vulkan 1.0. VeriSilicon will provide support for Vulkan 1.0 across a wide range of Vivante GPUs,” saidWei-Jin Dai, executive vice president of VeriSilicon’s IP Division. “We are excited to see this brand new API to unleash the tremendous performance potential of both new and existing GPU hardware for a new generation of applications on a broad range of embedded devices from power-sipping IoT clients to a new class of low cost mobile compute solutions. We are particularly excited about the opportunities our Vulkan implementation brings automotive customers to have far more granular control over graphics quality of service resulting in improved implementations of highly desired security levels and features.”

Vulkan work group members will hold sessions for the public 2:00-7:00 PM on Wednesday March 16 at “Green Space” located at 657 Mission Street Suite 200, in San Francisco. There are also a large number of Vulkan-related presentations and activities to be seen at the Game Developers Conference held in San Francisco on March 14-18th 2016. Details are on the Khronos event page.

About The Khronos Group

The Khronos Group is an industry consortium creating open standards to enable the authoring and acceleration of parallel computing, graphics, vision, sensor processing and dynamic media on a wide variety of platforms and devices. Khronos standards include Vulkan™, OpenGL®, OpenGL® ES, WebGL™, OpenCL™, SPIR™, SPIR-V™, SYCL™, WebCL™, OpenVX™, EGL™, COLLADA™, and glTF™. All Khronos members are enabled to contribute to the development of Khronos specifications, are empowered to vote at various stages before public deployment, and are able to accelerate the delivery of their cutting-edge media platforms and applications through early access to specification drafts and conformance tests. More information is available atwww.khronos.org. 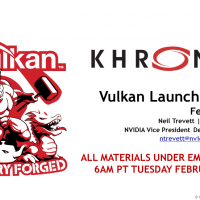 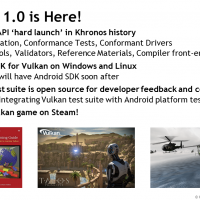 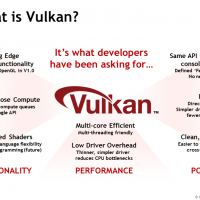 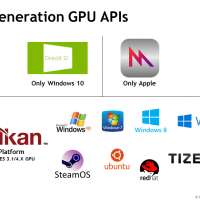 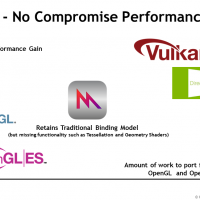 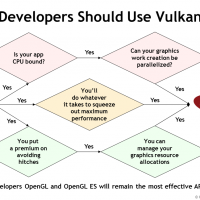 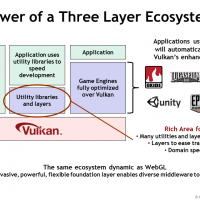 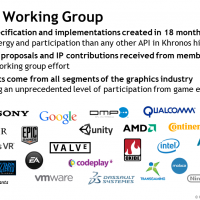 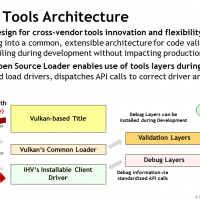 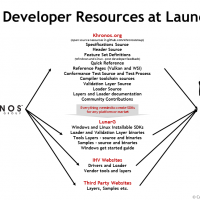 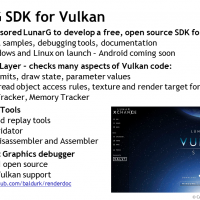 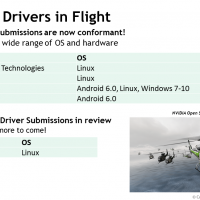 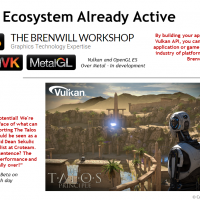 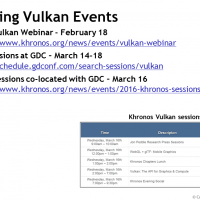 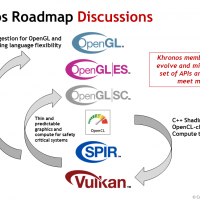 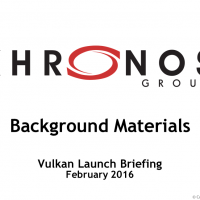 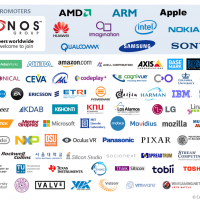 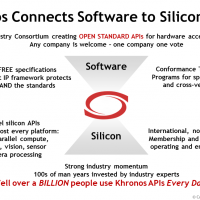 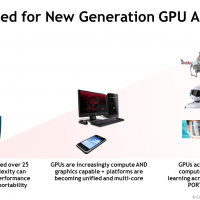 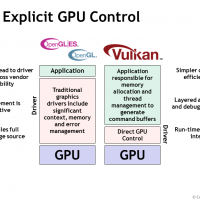 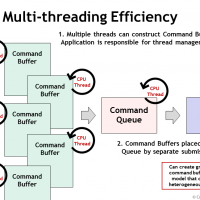 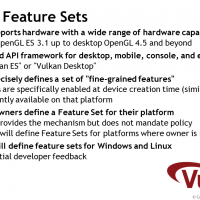 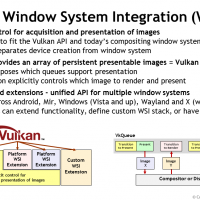 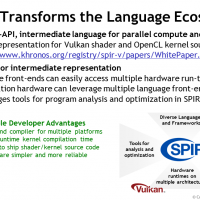 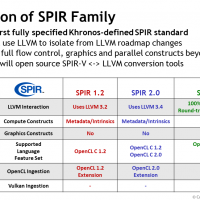 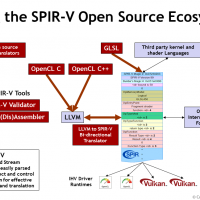 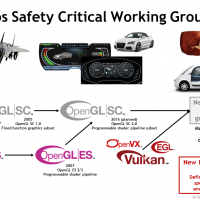 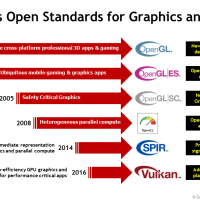