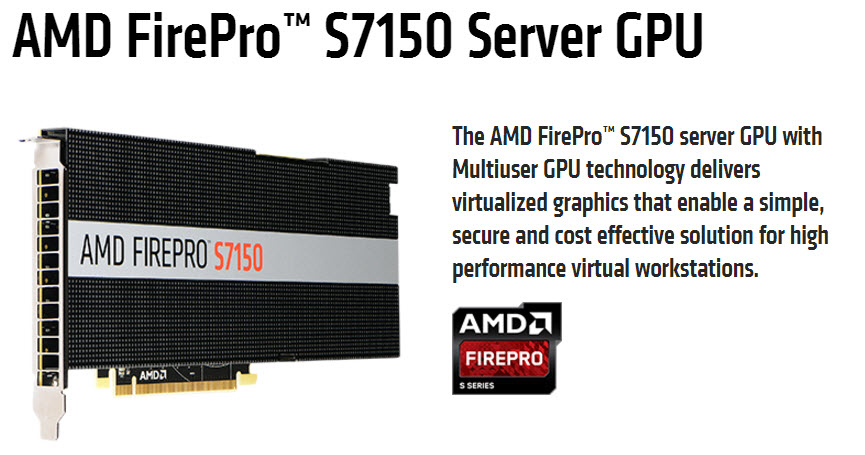 In the virtualization ecosystem, key components like the CPU, network controller and storage devices are being virtualized in hardware to deliver optimal user experiences, but prior to today the GPU was not hardware virtualized. AMD MxGPU technology, for the first time, brings the modern virtualization industry standard to the GPU hardware. What does this mean? Consistent performance and enhanced security across virtual machines. MxGPU controls GPU scheduling delivering predictable quality of service to the user.

“AMD multi-user graphics promises to change how and when companies utilize workstations by providing workers with on-demand powerhouse graphics when needed, while helping significantly reduce the total cost of ownership typically associated with large installations of workstations,” said Jon Peddie, president, Jon Peddie Research. “The move to virtualization of high-performance graphics capabilities typically associated with standalone workstations only makes sense, and will likely gain significant traction in the coming years.”

“We’re excited about the value the AMD FirePro S-series products present to our user community,” said Paul Sagar, VP, PTC CAD Product Management. “We are working closely with AMD on the support and certification of PTC Creo for the virtualized desktop.”

IT budgets can realize support for up to 16 simultaneous users with a single AMD FirePro S7150 GPU card which features 8 GB of GDDR5 memory, while up to twice as many simultaneous users (32 in total) can be supported by a single AMD FirePro S7150 x2 card which includes a total of 16 GB of GDDR5 memory (8GB per GPU). Both models feature 256-bit memory bandwidth.

AMD FirePro S7150 and S7150 x2 server GPUs are expected to be available from server technology providers in the first half of 2016.