Back in September, when GTX 980 came out, MSI announced they are not planning to introduce Lightning model based on GM204 silicon. Months passed, GTX TITAN X and GTX 980 Ti were released, but MSI has been quiet about its most powerful graphics card based on the ‘Big Maxwell’ GM200.

Today however, first render was posted on Facebook. The picture above is slightly modified to give you a better look. The MSI GTX 980 Ti Lightning is clearly a very long card, but that’s nothing unordinary for triple-fan coolers.

The card will follow TwinFrozr V blueprints when it comes to the design. Gigabyte’s GTX 980 G1 Gaming (posted below) looks very much alike the Lightning. Both cards are almost the same length, but Lightning will be much wider, thus indicating larger fans and lower noise.

It is unclear if the shroud will actually be illuminated by LEDs, as indicated by the glowing parts on the render. However if they are, it would be interesting if those would be controlled by RGB LEDs, giving you a choice of what color should differentiate your Lightning from the rest.

There’s a good chance we will be seeing more teasers from MSI very soon. 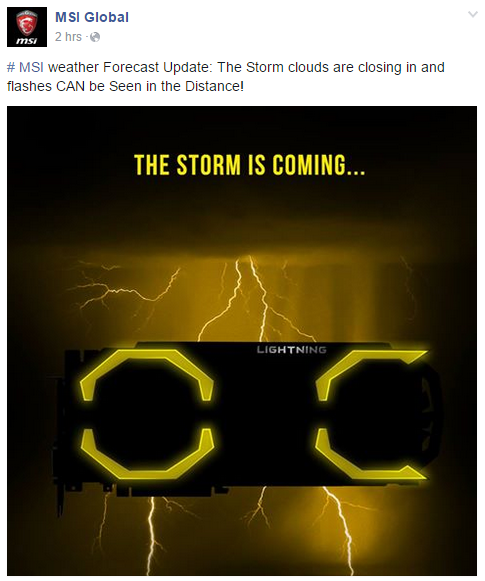