We have an update to Radeon R9 Fury news, thanks to guys over at TweakTown.

The question mark obviously indicates a rumor, we did not confirm this information, but TweakTown crew is quite confident that these are indeed Fury specifications. This quote pretty much includes all the juicy information:

According to our industry insiders, the Radeon R9 Fury will feature 3584 Stream Processors, down from the 4096 on the full Fury X. The Fiji-based GPU will be clocked at 1050MHz, which is identical to that of the Fury X. We have 4GB of High Bandwidth Memory that provides the same 512GB/sec of bandwidth, clocked at 500MHz (1GHz effective). We are being told to expect temperatures of the Fiji PRO-based R9 Fury to be less than 75C, which is considerably higher than the 50C or so from the watercooled Fury X.

According to the website, Radeon R9 Fury comes with 56 Compute Units with 3584 cores in total. It means each Shader Engine has two CUs disabled. Here’s how the diagram would look like if this information was true. 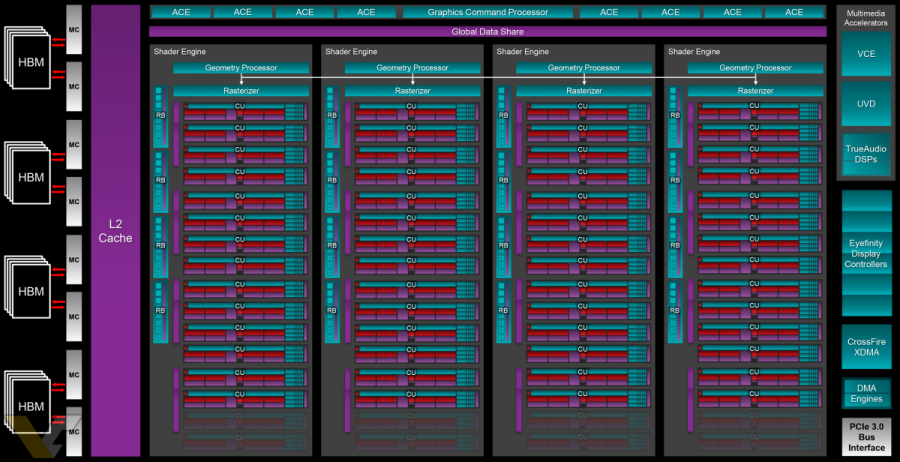 They also claim that air-cooled edition will run at much higher temperatures. While Fury X operates at 50-60C, the Fury non-X would run under 75C. Earlier rumors indicated that reference Fury non-X has triple-fan cooling solution. AIBs will be allowed to change them to their in-house designs, so the temperature is likely be even lower with partners’ cards.

What’s interesting is that Fury would run at the same clock speeds as Fury X. At 1050 MHz it would reach peak computing performance at 7.5 TFLOPS. The HBM clock speed cannot be changed from 500 MHz. R9 Fury will also sport 4GB 4096-bit memory configuration.