The announcements are over, so it’s time to see what we’ve learned.

First up, slightly modified photograph from HardwareCanucks editor. We can clearly see the new flagship card completely naked. Compared to R9 290X (or 390X if you prefer), we have much smaller area devoted to graphics processor and memory modules, as those are now installed as one package on interposer. The Radeon R9 Fury X has two 8pin power connectors, but the TDP is rated at 275W, which is comparable to Hawaii-based graphics cards, and slightly over official TDP for GM200 cards. Just to be clear, TDP (Thermal Design Power) has nothing to do with power consumption, so we still have to wait for proper reviews to learn how much power does this card really need. I find it quite interesting there are no commonly used round capacitors that we all so hate due to coil whine they generate, a step into right direction. 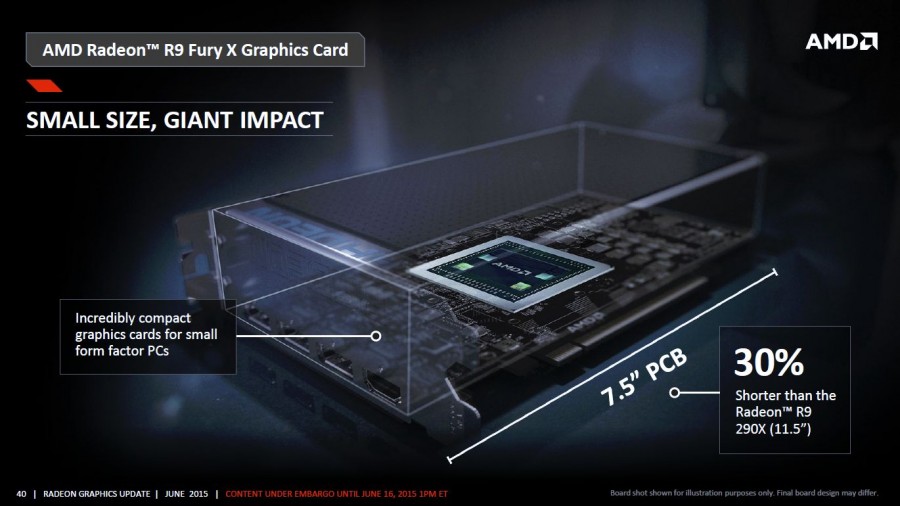 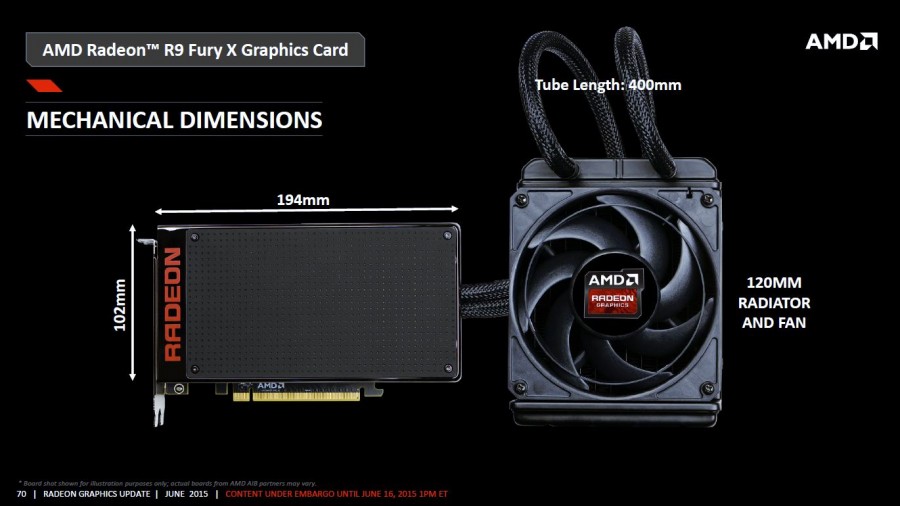 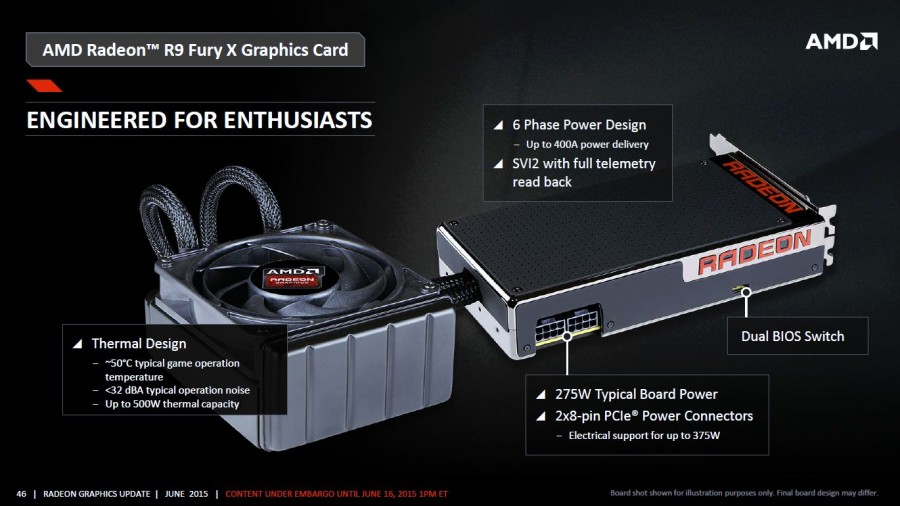 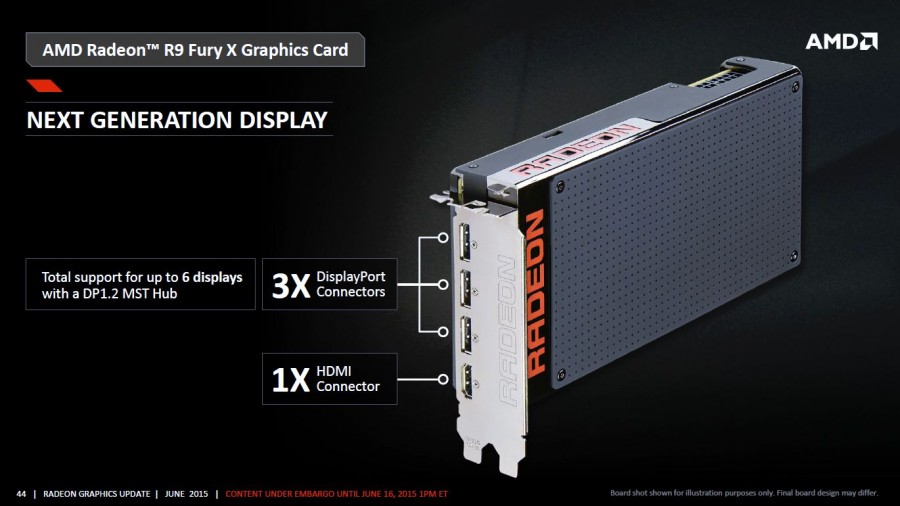 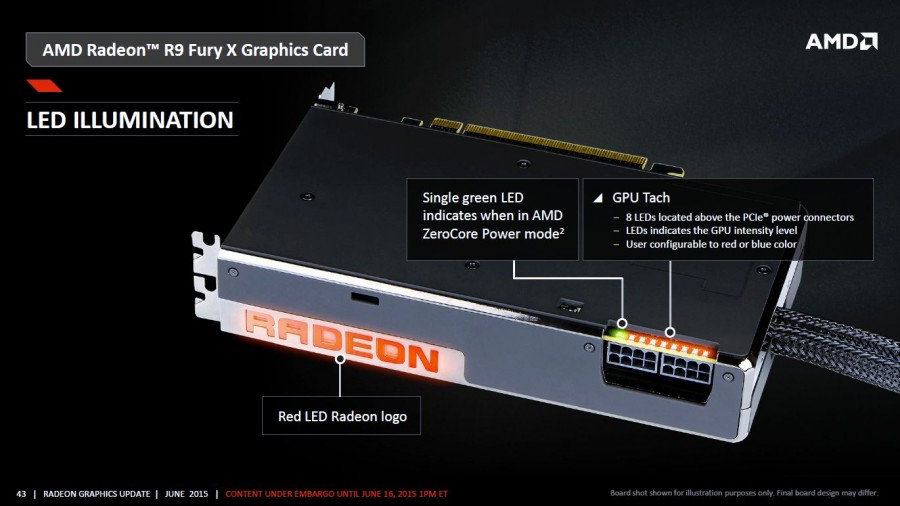 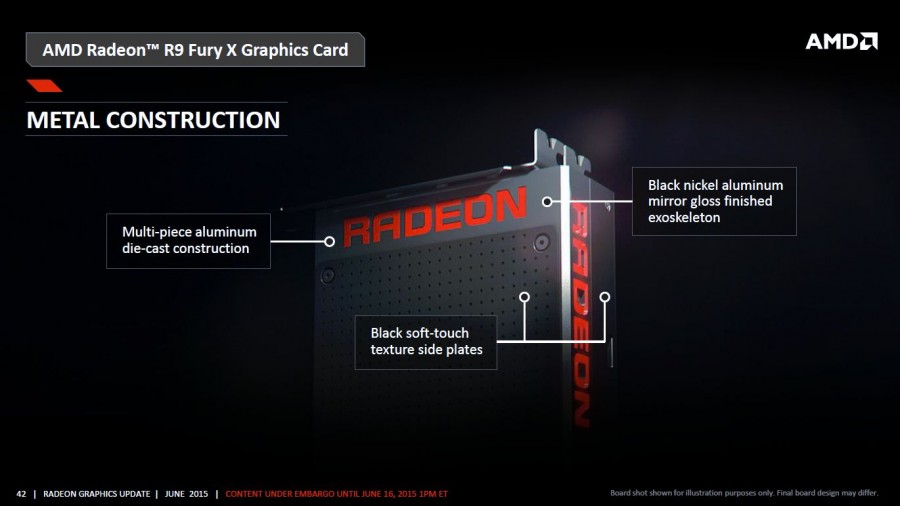 Here we have a better view of what’s under the hood of this tiny monster. The cooler was designed by CoolerMaster. The pump had to be specifically designed for Fiji, due to how big it is. No commercially available AIO cooler would cover the whole area anyway. The heatpipe was designed to cover some VRM components as well, there’s a full cover base plate covering all components. 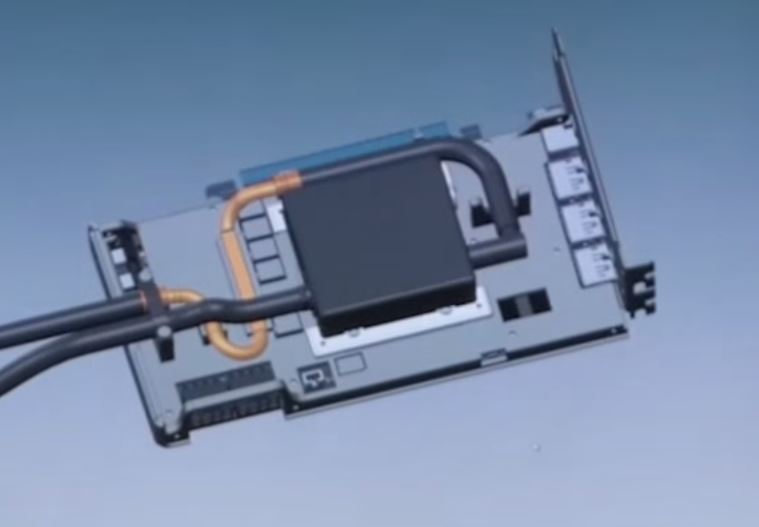 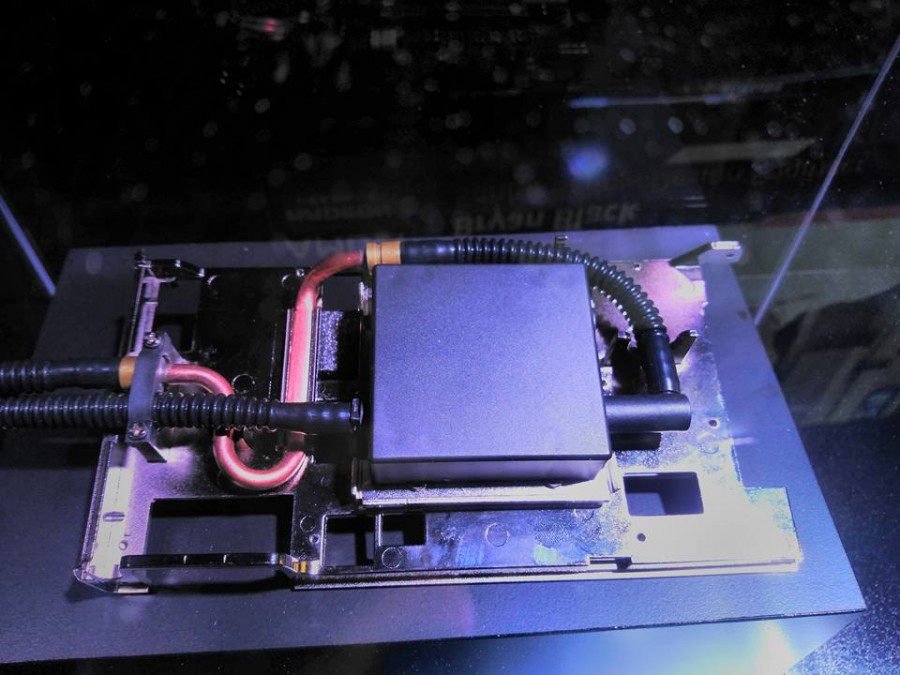 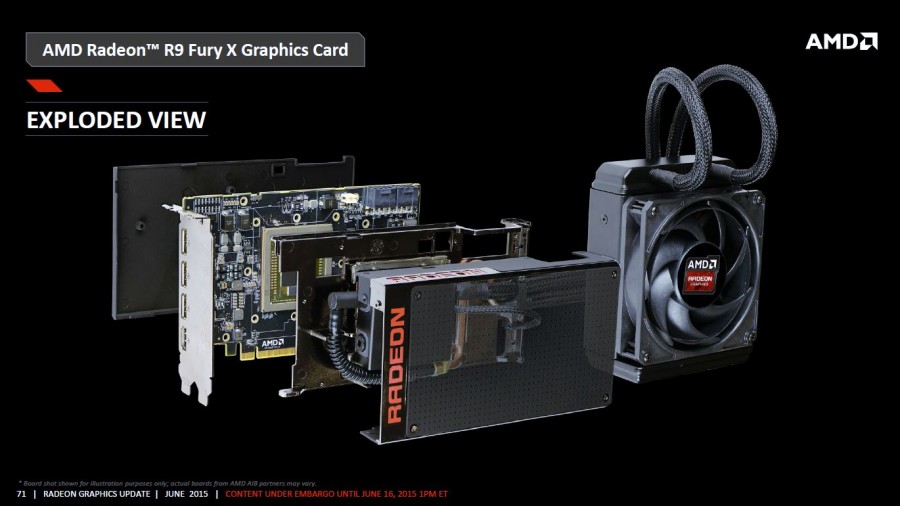 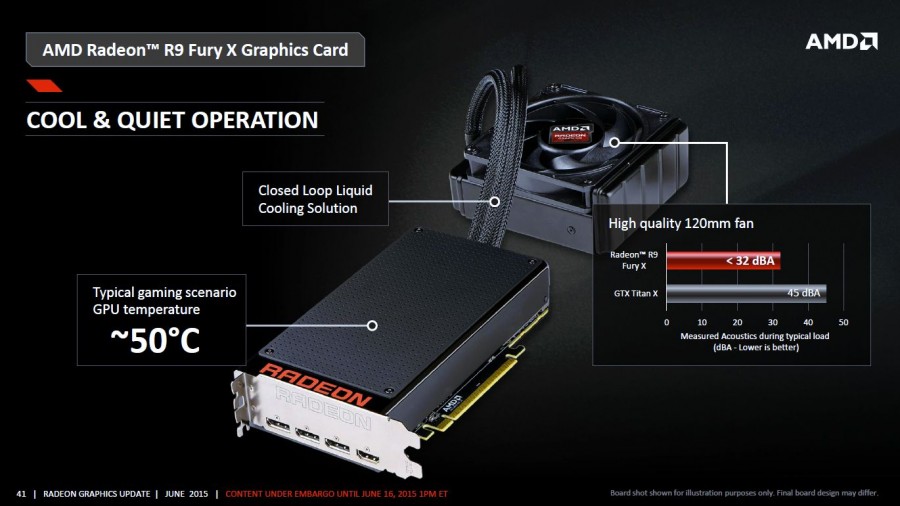 Last but not least, here is much better view on Radeon R9 Fury X2 PCB and possibly the prototype pictured on the right. This is really the state of the art of engineering. Putting such powerful GPUs so close to each other makes this card smaller than most high-end single-gpu graphics cards we already have in our PCs. The most interesting part of PCB shot are two 8pin power connectors. It means R9 Fury X2 will not need more than 375W. 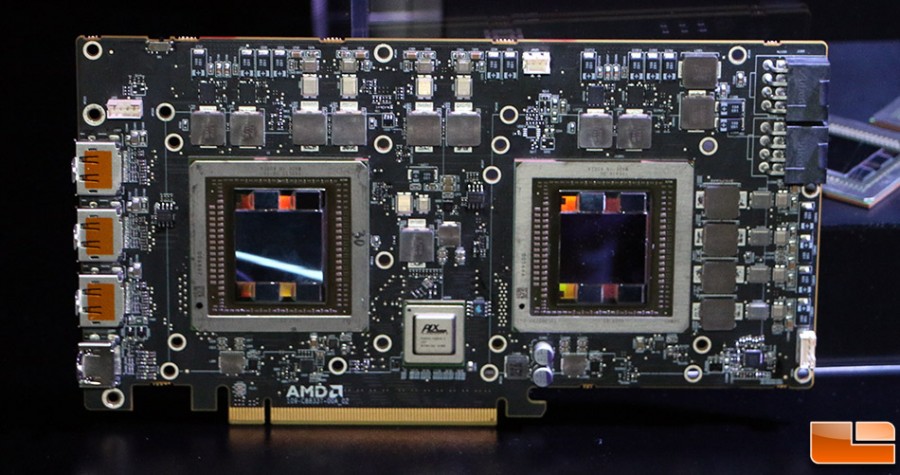 AMD has shown only one game, which is Far Cry 4 in Ultra settings and 4k resolution. They claim Fury X should allow the gameplay at 54 frames per second on average, and it shouldn’t drop below 43 fps — good conditions for FreeSync monitors.

This is quite an achievement. Now if we could only see how other cards do in this test. Well we can’t, because neither do we even know what was the testing equipment nor what kind of test this was. We do have however AnandTech review with TITANX and 980Ti in FarCry4 in Ultra and 4K resolution. So assuming we have similar conditions, and assuming it’s similar kind of test, we could say Fury X is 10 fps faster than both these cards. Very interesting. 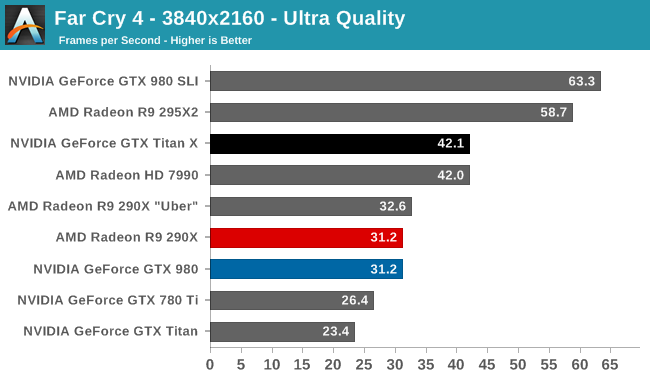 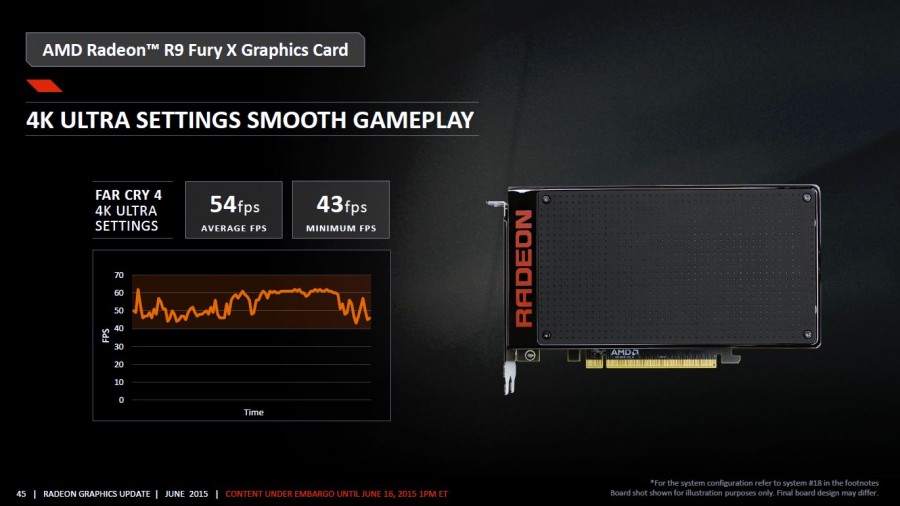 I think this was the star of the show. Ultra-compact enthusiast graphics card with the most advanced GPU? Count me in.

This card is only 6inches long, and you can easily mistake it for GT 730/R7 360 grade product. The GPU itself is definitely cut-down variant of Fij, but AMD already told us it’s faster than R9 290X, so I wouldn’t be too worried about performance.

I remember speculating about three Fiji variants, because the gap between 4096 Stream Cores (Fiji) and 2816 Stream Cores (Hawaii) was so vast, I just couldn’t see two cards filling it. Back then I named it Fiji LE and I think it would fit this card perfectly.

The last slide has Fiji render with 4 stacks, so it’s quite obvious that Radeon R9 Nano will come with 4GB HBM1 just like Fury X and Fury.

AMD Radeon R9 Nano is expected to launch this summer. 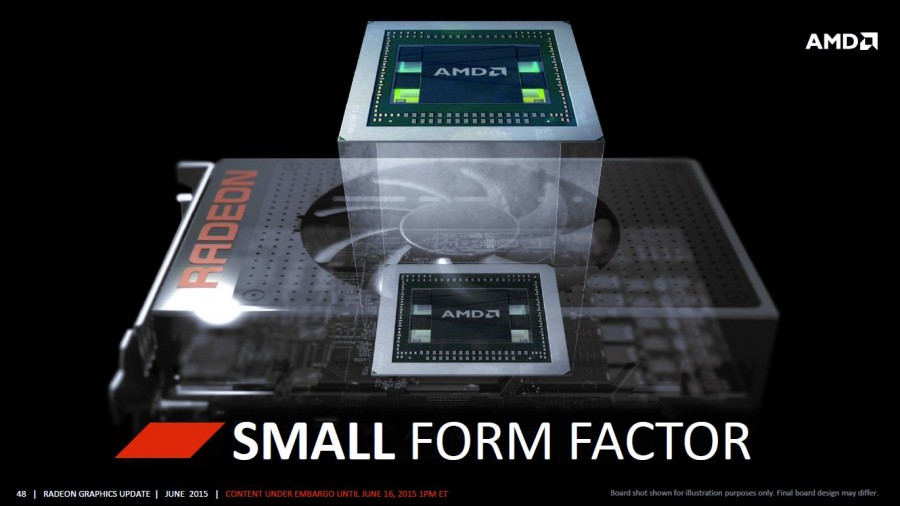 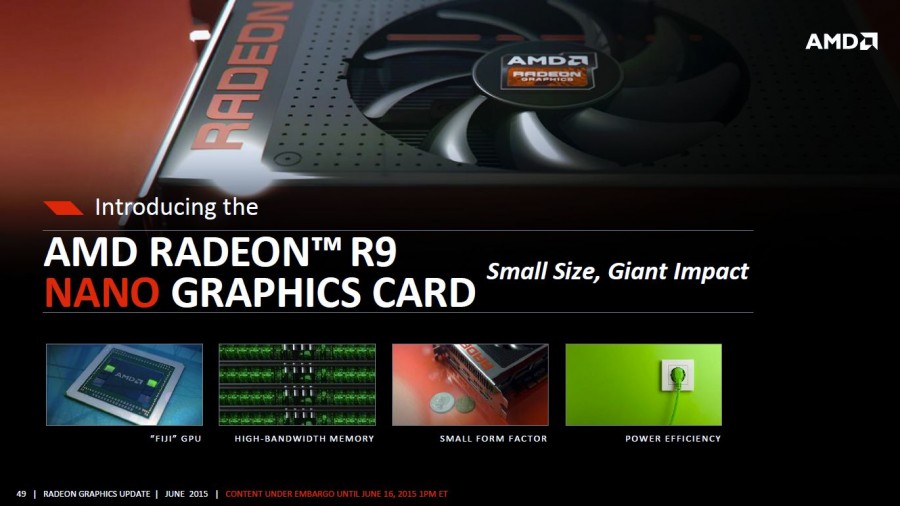 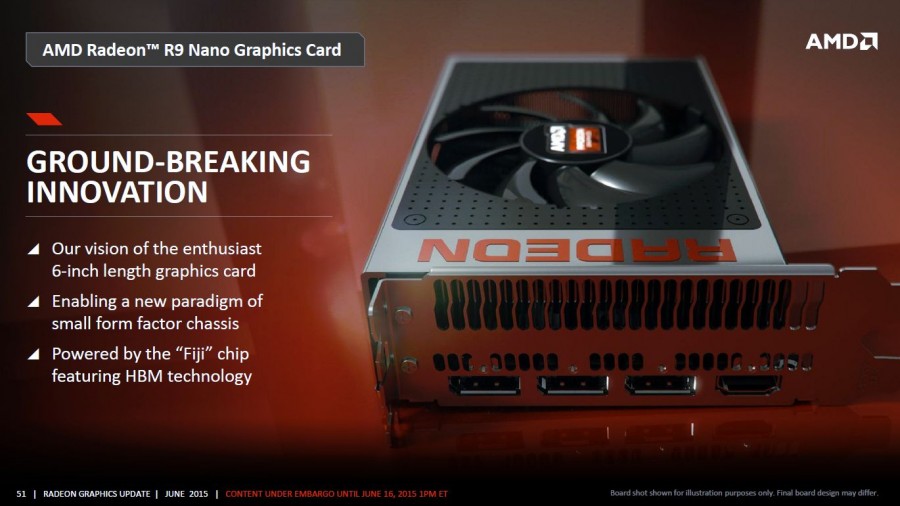 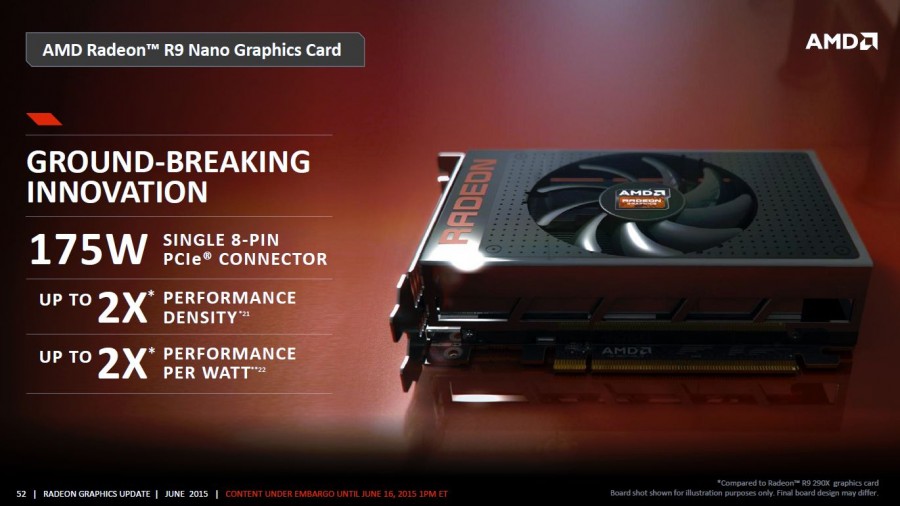