Yesterday Brazilian website leaked full list of MSI Radeon 300 graphics cards along with pictures and, more importantly datasheets. One ->datasheet<- in particular was very interesting. If this datasheet was correct then Radeon R9 390 would be in fact using full Hawaii silicon. Well unfortunately, that may not be true. 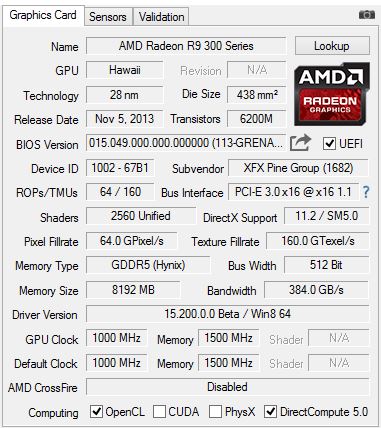 Here are the first GPU-Z screenshots from upcoming Radeon R9 390 series. The first one is full Hawaii XT GPU codenamed Grenada XT featuring 2816 Stream Cores, and the card on the right is Grenada PRO (Hawaii PRO) with 2560 Stream Cores.

It means that both cards are direct rebadges of R9 290X and R9 290 respectively. The changes are limited to clock changes and addition of 8GB variant to Hawaii PRO.

It is unclear if AMD is planning to release reference models of Radeon 390 series. If not, then we will have to rely on the data provided solely by AIB partners.