Editorial: How big is “Fiji”?

It came to my attention that AMD recently released a lot of ‘HBM-device’ renders (that’s how they call it). You can find them on social pages and some AMD websites. I decided to do the boring work of putting all these renders together.

Just to be clear, this post is not about the graphics card, but graphics processor — Fiji.

The Question: How big is Fiji?

The ‘whole package’ of GPU, memory and interposer is much larger than ‘typical’ GPU. It needs more space to accommodate the memory and the GPU, which in a high-end segment needs a lot of space. In this post we will be comparing GPUs only.

In order to answer the main question, we need to consider few things::

I discovered that if you enhance the contrast of the first render (1), you can actually see both sides of the GPU. What it means is, we can at least be conclude that Fiji has a width of around 21-23 mm. But wait, how do we know that? Well, we do know that HBM module is 5 mm in width, so it is as simple as replicating the module and comparing the sizes. Also this render is a direct shot from above, so no aspect ratio or scaling problem to be considered.

Okay, so we have a very rough estimation of the width. What about the height? To answer this question I had to spent few hours putting those renders together. Everything had to make sense. At some point I thought Fiji had 6 HBM stacks, but then I understood that the modules are not exactly aligned the way I expected. Also, if you look at the third render (3), you will notice that the green area is quite large. Actually it is as tall as the HBM module itself. The same area is (supposedly) mirrored at the bottom.

I took AMD logo as the starting point, and everything that was not visible was mirrored accordingly. 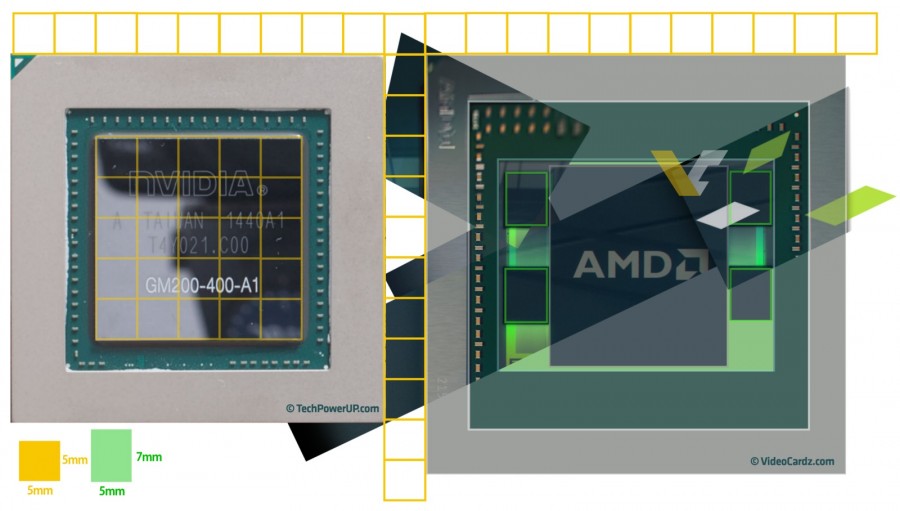 Based on my work, Fiji dimensions should be as follows:

The actual die area should be something in between those numbers. I think AMD is trying to make 8-billion transistors competitor to GM200. To achieve this, die has to have (around) 575 mm2 ,but of course this is a very rough estimation, we could be wrong or inaccurate in many things here. Few months ago I would never believe AMD could make 4k core GPU. I have to take that back, because after looking at my renders and my work, it is truly in AMD’s range. Actually I would be surprised if Fiji was not 4k part at this point.

The thing that puzzles me is the latest HBM presentation. The sixth render (6), which is actually a diagram, tells us that the interposer is smaller than 70mm in both directions. My mockup is just slightly bigger than 52mm. Either the slide is very inaccurate or I failed miserably. Well I tried ;)

Anyway guys, what you think of all this, does it make any sense to you?