Company revealed in press release that new ‘premium tower PCs’ from HP ENVY Tower series will either be equipped with GeForce GTX 980 or Radeon R9 380 graphics cards depending on the consumer choice.

Powerful and stylish, the HP ENVY Tower is designed for content creators who need high-performance processors and strong graphics capabilities for editing videos and photos. For performance, customers have the choice of up to NVIDIA GTX 980 or AMD Radeon™ R9 380

What it means is that both cards are possibly going to offer similar performance. What we don’t know are the specifications of this card. One would assume R9 380(X) are simply rebranded R9 290(X) series, but so far there is no evidence behind this rumors, other than leaked XFX R9 380 picture, which does look very much alike R9 290X (at least judging from the PCB).

HP also revealed new mobile Radeon graphics cards. If you’re confused why are these called A300 rather than M300, then let me explain that A300 series are simply based on PCI-Express, while most M300 cards are designed in MXM format.

Both cards are not exactly the best representatives of high-end gaming experience, but at least A360 has 4GB memory on board. 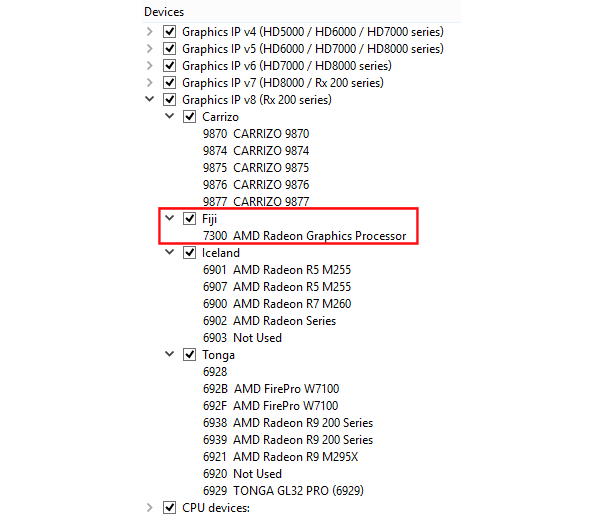 In other news, Fiji was found as one of the supported GPUs in CodeXL 1.7. Actually this picture is interesting for three reasons.

One: it means Fiji is close, two: it revealed the IP level of Fiji Silicon (it’s the same architecture as Tonga and Carrizo), and lastly: Fiji has Device ID of 7300, which as far as I know was already occupied by Bermuda. So technically Fiji is Bermuda.

New Lineup of Stylish All-in-One PCs, Tower PCs and a 4K Display Look Great in the Home and Deliver the Power and Performance Customers Crave
PALO ALTO, CA–(Marketwired – May 4, 2015) – HP (NYSE: HPQ) today announced a new family of all-in-one desktop and tower PCs designed to fit beautifully in the home for back to school. The new desktop lineup offers customers power and flexibility to scale for next-level productivity and entertainment.

“The desktop PC continues to be an important form factor for customers who want to get things done and be entertained, but lack style and as a result are often hidden in basements and dens,” said Kevin Frost, vice president and general manager, Consumer Personal Systems, HP. “With our 2015 desktop family, we are breathing new life into the category by giving customers more capabilities wrapped in colorful and premium designs that they will be proud to place in kitchens, living rooms and other public spaces in their homes.”

New All-in-One PCs with Modern Design and Powerful HardwareFor customers who want a desktop PC as a focal point in the home to create, share and be entertained, the HP Pavilion All-in-One PCs merge design with functionality offering the right features for immersive and powerful experiences.

The HP Pavilion All-in-One PCs have HDMI Out for customers to connect to a second display for multi-tasking or TV for maximum entertainment. HP Pavilion All-in-One PCs come with and two USB 3.0 ports and a 3-in-1 media card reader located on the display chin for easy access. On the back, four USB 2.0 ports are placed with the HDMI and LAN for easy routing of cables to keep the workspace clean and organized.

For immersive experiences to enjoy movies or for families to gather around to share videos and photos, the 21.5-, 23- and 27-inch diagonal IPS full HD displays have a new adjustable hinge on the pedestal floating display to bring it closer to eye level for a comfortable viewing experience. The HP Pavilion All-in-One PCs feature B&O Play audio to give customers bold, crisp and accurate sound through its dual speakers.

HP Pavilion Tower Gets Makeover with New Colorful DesignsFor the customer looking for the latest in power to replace their older tower without compromise, the HP Pavilion Tower offers flexible configuration choices for everyday productivity and entertainment.

Taking cues from HP’s colorful notebooks, the HP Pavilion Tower offers a distinctive new look with a vertical orientated design coming in Blizzard White, Natural Silver, Nobel Blue and Sunset Red.(3) The HP Pavilion Tower supports fourth generation Intel® Celeron® processors, Intel® Core™ i3 through i7 processors(2) and next generation AMD A-Series A4 through A10 processors. Customers have graphics options from integrated graphics up to NVIDIA GTX 745 for better performance. For storing videos and photos the HP Pavilion Tower PC offers customers a selection to choose up to 3TB hard disk drive (HDD).

Powerful and stylish, the HP ENVY Tower is designed for content creators who need high-performance processors and strong graphics capabilities for editing videos and photos. For performance, customers have the choice of up to NVIDIA GTX 980 or AMD Radeon™ R9 380 discrete graphics with support for fourth generation Intel® Core™ i5 and i7 processors(2) or next generation AMD A-Series A8 through FX processors.

For ultimate power and performance, the HP ENVY Phoenix Tower is built for the customer who needs the best graphics frame rates and performance for gaming or hardcore tasks. HP ENVY Phoenix Tower has a dark aluminum chassis finished in brushed metal with a radiant red LED accent on the front. To support the power necessary for a solid gaming experience, especially on a 4K display, customers have the choice of up to NVIDIA GTX 980 or AMD Radeon™ discrete graphics with a choice of fourth generation Intel® Core™ i5 and i7 processors.(2)

The HP ENVY and HP ENVY Phoenix Towers give customers a selection to choose up to 3TB HDD with the option to add more speed with up to a 512GB SSD for storing games, videos and photos.(5) Both premium towers offer a RAID storage option for customers to mirror content to a second hard drive and include Bang & Olufsen Audio Control for a customizable audio experience.

The HP Pavilion, HP ENVY and HP ENVY Phoenix Towers are expected to be available in the United States on June 10, 2015 at www.hpshopping.com. With a starting price at $699.99 is the HP ENVY Tower and $899.99 is the HP ENVY Phoenix Tower. HP Pavilion Desktop Tower will also be available in select retailers on June 26, 2015 with a starting price at $449.99.

The HP Spectre Studio Display is expected to be available in the United States on May 24, 2015 at www.hpshopping.com with a starting price at $999.99.