AMD: “We’re putting the finishing touches on the 300 series”

This is in fact, the first time AMD has officially spoken about Radeon 300 series. Impatient customer who recently purchased not-so-well-advertised GTX 970 asked AMD if there are any news about Radeon 300 series, featuring the next generation of GCN architecture. To everyone’s surprised AMD actually replied to this question telling everyone Radeon series are ready, but still going through the final stage of development. 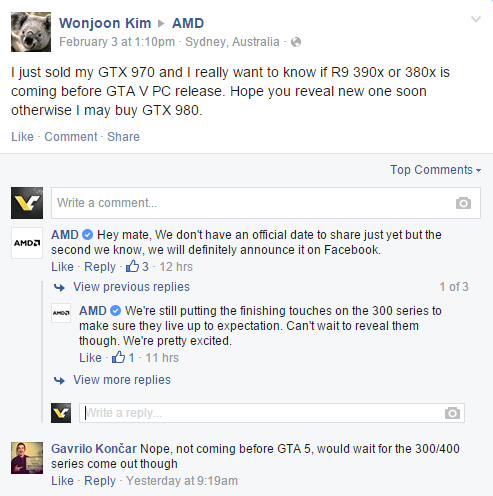 What is not surprising though is the fact that more and more leaks about R300 series are starting to pop up. We have gathered all rumors that are worth reading in our previous post.

We are aware of the latest ‘benchmark scores’ being leaked through Chinese forums, but we are quite confident these are fake. We will however keep looking for more credible information about Radeon 300 series, so stay tuned for more.