This week is probably the worse week for NVIDIA in years. First the news about gimped GTX 970 specs have been confirmed, and today we learn that G-Sync does not require any special module to work in (some) notebooks.

PCPerspective’s investigation has led us to some shocking conclusions. The news broke after someone going by the name GameNab told everyone that he discovered the algorithm in NVIDIA drivers that alllows G-Sync to work in every eDP display. Well that was not exactly the case, that guy simply got his hands on (very) special driver.

ASUS Nordic Support representative inadvertently leaked internal driver (346.87) with hidden G-Sync support. The driver was meant to fix completely unrelated issue, but the rep had no idea that G-Sync support was added. As a result the person who received the driver, was welcomed by this popup:

Turns out, the leaked driver adds support for G-Sync in some notebooks. ASUS G751 is one of them.

Here’s a screenshot from ROG forums where the driver was leaked (source), the download link is already down:

NVIDIA confirmed to PCPerspective that this technology is still in alpha-phase, but the G-Sync support was not meant to be added anytime soon. Most importantly NVIDIA confirmed G-Sync module is not required for G-Sync to work.

In fact, PCPer took apart the whole ASUS notebook to look for G-Sync module. There was none. 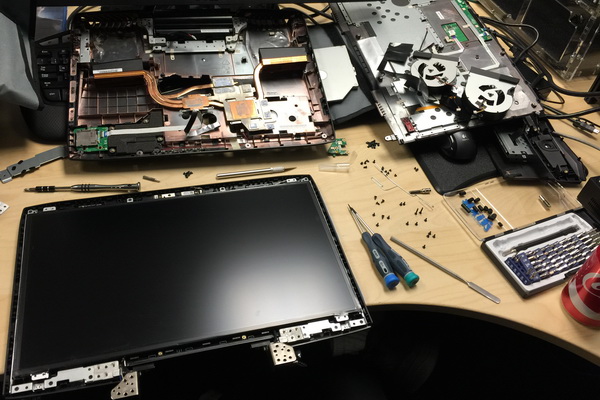 This technology is not fully working yet, there’s a blinking screen issue and low framerate.

This obviously leads us to the discussion of the need for a dedicated G-Sync module on current monitors. In order to get shipping variable refresh monitors in the market last year, NVIDIA had no choice but to create a module to replace the scalar in modern displays. No monitors existed then with embedded DisplayPort interfaces and the standard had not been created for Adaptive Sync. But as the release of AMD FreeSync displays nears, we have to ask: will a dedicated module be required for G-Sync on future products? Interestingly, NVIDIA says that the answer hasn’t been 100% decided yet – the future could include this same module, a new module or perhaps even no module at all. There are features and technologies in the G-Sync module that haven’t been revealed, at least according to NVIDIA, and with that line of thinking I don’t see a time when NVIDIA relieves the desktop market of that requirement in the near term.

If you’re interested in technicalities, head on to PCPer article.