Today, we bring you another exclusive information, but this time from the camp of NVIDIA.

According to our credible sources NVIDIA decided to skip GeForce 800 series and move straight to 900. Of course there is a simple explanation why did this happen.

For the past two weeks rumors about mobile GeForce 900M have been circulating around the web. Apparently NVIDIA decided to launch mobile GM204-based parts under 900M series, instead of rumored 800MX. While it makes sense for mobile parts (to differentiate Kepler from Maxwell), it would cause chaos in desktop naming consistency.
Long story short, if NVIDIA didn’t rename 800 series to 900 series, we would have desktop 800 and mobile 900M series in relatively short time.

That said, NVIDIA has finally came to the conclusion that synchronizing desktop and mobile platform series is crucial to keeping things simple. So technically there are no desktop 800 series, unless of course NVIDIA decides to launch them as OEM exclusive.

Some of you will ask why did we report about 880 and 870 last month. It’s because the decision to rename GeForce 800 to 900 series was made just recently, at the time these cards were codenamed exactly how we reported.

Okay, so you know how these cards are going to be called, now when should you expect these cards to be released?
We told you there’s a big press event in September. Today we will update this information. The event in question will take place second week of September, most likely between 9th and 10th. However, that is just a ‘paper launch’.
The actual NDA for both cards will lift on September 19th. Bear in mind, those dates may change at any time.

I made this rather unprofessional looking chart, so just show what is happening in both camps in the next few months. AMD is about to release two Tonga-based card: Radeon R9 285 coming next week, and R9 285X coming after Maxwell GM204 announcement. There’s also R9 295X, which is currently on hold, meaning its release will depend on GTX 980 performance.

We are not sharing any specs yet, because nothing except 4GB 256b memory configuration, has been confirmed.

Chart below does not represent performance segregation, it was just made just to visualize of what is to come. 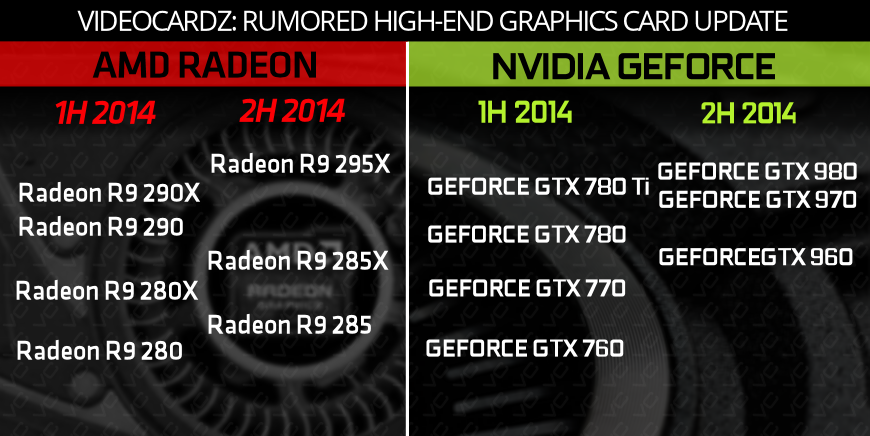