Some fresh leaks have been discovered by one of our most dedicated readers, Cloudfire. What he discovered are the specs of the upcoming Tonga GPU, which as you know is being slowly being prepared by AMD. Tonga is based on the same GCN architecture known from Hawaii or Bonaire. Tonga is actually a Tahiti replacement, but since it’s much more power efficient, AMD has decided to replace Pitcairn/Curacao/Neptune with something fresh.

Tonga has the same amount of Compute Units as Tahiti. Assuming it has the same SP layout as other Volcanic Islands GPUs, then we should expect 2048 unified cores. The number of TMUs and ROPs is debatable at this point,  as we don’t know if mobile Tonga will have the same numbers as desktop variant. The best scenario is 128 TMUs and 32 ROPs respectively. This would be the exact same chip as Tahiti in terms of specs, but not in terms of the interface. Tonga has 256-bit wide memory bus, which is more or less a standard for mobile graphics processors.

According to leaked specs, the maximum core clock should not exceed 800 MHz. Of course, that would be the boost clock. AMD Radeon R9 M295X would feature 4GB GDDR5, but it does not mean we won’t be seeing 8GB variants too. This is undoubtedly the biggest advantage of GTX 880M right now, so it would be silly if AMD had no such option being prepared.

Tonga is not only a mobile chip. Actually, the first time we heard about Tonga was about desktop graphics card. It’s no secret now, that a new model will be added by AMD very soon. Since Tonga has worse specs than Tahiti (at least on paper), we assume it won’t be using R9 280 series nomenclature. Instead, it should land somewhere in-between Curacao R9 270X and Pitcairn-based R9 280. Radeon R9 275X sounds reasonable.

Last but not least, the appearance of M295X should only give you a reason to expect a desktop version of Radeon R9 295X sooner or later. Rebinned Hawaii chip, 100 MHz GPU boost, slightly faster memory and we have a new competitor for 780 Ti. 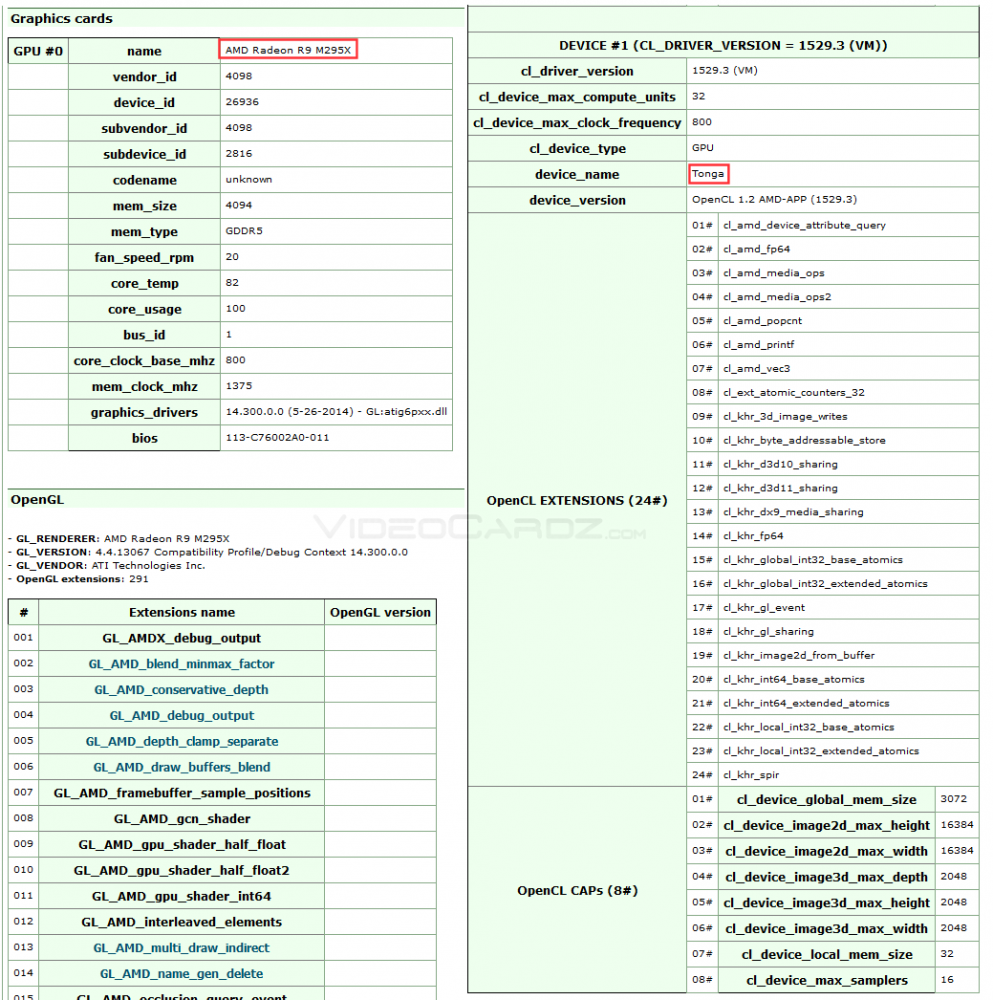