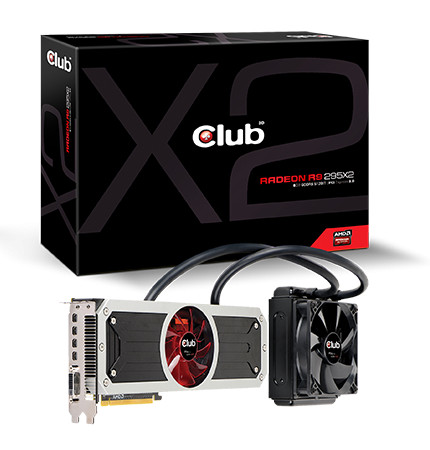 Club 3D, the renowned Dutch based manufacturer of high performance AMD graphics cards is proud to introduce the new boss. Today we show you the Club 3D Radeon R9 295X2, the fastest graphics card ever!

In 2013 AMD launched the new Radeon R9 series which consists of high performance graphics cards targeted at gamers who want nothing but the best performance for their gaming PC. The Radeon R9 series is topped by the incredibly fast and capable Hawaii GPU found in the Radeon R9 290 and 290X. The extreme performance levels of the Hawaii GPU result in some heat production. The Club 3D Radeon R9 290 and 290X royalAce cards however show that with a capable triple fan CoolStream cooling solution the Hawaii temperatures can be kept at as low as 68 degrees under full load.

Built for performance:
As a tour de force to show what is possible when it comes to getting the maximum performance out of the latest GPU technology, a card debuts that uses not one but two of the top of the bill GPUs soldered onto one PCB. This dual GPU beast brings maximum levels of performance to those who are looking for the non plus ultra when it comes to graphics cards and take no less than the highest possible frame rate ‘out of the box’.

The brand new Club 3D Radeon R9 295X2 features two of the widely awarded Hawaii XT GPUs running at a core clock of up to 1018 MHz, boasting 2816 Stream Processors, 4096 MB of GDDR5 memory and 512 bit memory bus each. Yes, this adds up to a whopping total of 5632 Stream Processors, 8 GB of GDDR5 memory and 11.5 TerraFlops of single precision compute power! These GPUs are fitted on a special PCB with a 5+1 power phase design per GPU and use the best possible components to ensure the most stabile and consistent operation. The Club 3D Radeon R9 295X2 was engineered for ultimate performance.

Finished for looks:
The 305 mm wide powder coated, cast aluminum shroud already tells you: this is a serious piece of hardware! Engineered with extreme attention to detail, this monster doesn’t hide its ambition. This is the fastest graphics card in the world and it wants you to know it. The separate radiator with fan and the thick rubber tubes connected to the pumps clearly distinguish the R9 295X2 from any other graphics card ever claiming to be the worlds’ fastest. The card has a full metal construction and backplate and is complemented by the red illuminated central fan and RADEON logo on the side. 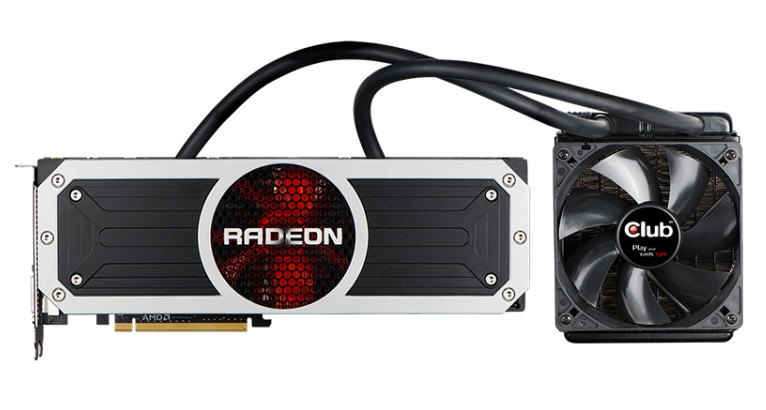 Loaded with features:
Of course the Club 3D Radeon R9 295X2 offers all the latest technological features that debuted with the Hawaii GPU like:

TrueAudio: technology that puts the magic of surround sound into every headset and helps give sound engineers the freedom to innovate in ways they’ve never had before. This is what the future of PC gaming sounds like!

Support for AMDs own Mantle API: There’s optimization and then there’s Mantle technology. Games enabled with Mantle speak the language of the Graphics Core Next to unlock revolutionary performance and image quality.

Ultra resolution gaming: for an increasing number of gamers, having enough isn’t the point. For them, overkill is merely a starting point. That means extreme resolutions, multiple monitors and every slider to the max. Run ultra settings in 4K with impunity. Or get two million pixels more than 4K combining five HD screens in an AMD Eyefinity setup. Either way, the Club 3D Radeon R9 295X2 barely breaks a sweat.

Project Hydra:
‘It’s a scientific fact that water is 24 times more effective and better suited for absorbing and transferring heat than air.

The Radeon R9 295X2 is the first Club 3D AMD graphics card to feature a custom designed closed loop watercooling solution. This solution features dual GPU cooling blocks with integrated pumps, connected to a 120 MM radiator and fan by sealed tubes. There is a separate, red illuminated fan in the centre of the cooler shroud to keep the VRM’s and memory chips cool under any circumstance. This extreme solution keeps the R9 295X2 always cool and quiet. Even during your 4K or Eyefinity gaming marathon. The Club 3D Radeon R9 295X2 will be available in strictly limited quantities, so if you’re in the market for the fastest graphics card in the world, make sure to pre order with your Club 3D reseller soon!