We still have a lot of questions and very few answers. However I managed to confirm few facts about the upcoming dual-GPU graphics card from AMD.

Although there is no shocker here, it’s a very important information. The fact that R9 295X2 has no 10GB or 12GB of RAM could further suggest that it will be ‘affordable’. At least compared to ridiculous price of TITAN Z, which was more a marketing stunt than launch of a new gaming graphics card. 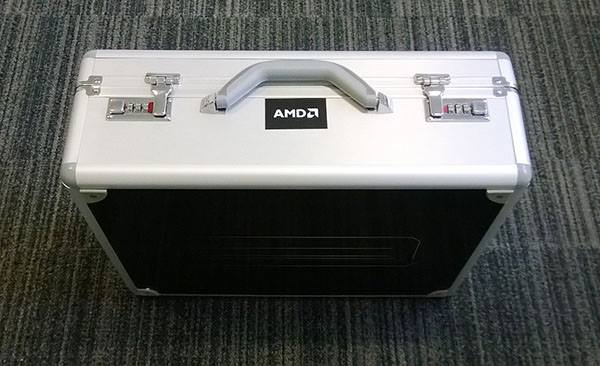 On April 2nd, reviewers will be allowed to post the picture of the briefcase in which the card arrived in. Luckily for us, not all reviewers read the NDA. I’m not going to say who leaked it (it’s a big site and may cause them trouble), but you can easily find it by searching the hashtag #2betterthan1.  According to leaker the full briefcase weights 5 kilograms.

Do you see any resemblance to ASUS ARES? Yes, it also arrived in a briefcase, almost identical briefcase. What it means is that ASUS could have taken a part in development. What it also means is that we are looking at a premium product, most likely for a premium price.

I can confirm that R9 295X2 has at least five display outputs, including: one Dual DVI-D and four mini-DisplayPorts. This is quite interesting approach, and I’m sure multi-display users will love this. AMD is pushing forward with its 4k campaign, while this card was not only designed for 4k, but for 8k as well.

Something has just crossed my mind, which is slightly off-topic, if any AMD employee is going to read this: For the love of god, if you are going to make a presentation about a product designed for 4k resolution (aka FirePro W9100), please make your webcast available in at least HD resolution, not 360p… Sincerely, every editor on the planet.

The NDA lifts on April 8th, this is when reviewers will be allowed to post first information about the new card. At this point we don’t know whether this embargo lifts on a product itself or more precisely the reviews of it.

Well it already happened before, where we had to wait few days for the reviews after rather basic introduction of a product. However the fact that ‘the chosen ones’ are already receiving their samples could suggest that it’s an NDA on reviews. Hopefully.

Fudzilla today reported that R9 295X2 has a TDP around 500W. The bad news is that if you own a cheap low wattage PSU you can almost immediately forget about buying this card, there is a big chance your PC won’t even boot. The good news is that it could be a full-Hawaii after all. The R9 290X has a TDP around 270W (it’s not officially advertised, I wonder why?), so with few improvements AMD could easily get 500W with two Hawaii XTs.

That’s all for today, stay tunned for more.