Microsoft has just introduced its DirectX 12.

Looks like the rumors about Mantle-copy turned out to be inaccurate. Microsoft has been working with major hardware manufacturers to develop new DX12 API. We are still missing a lot of details, but the most important bits of information are available.

DirectX 12, just like AMD’s Mantle, takes things to much lower hardware abstraction level than ever before. Similar to Mantle, DX12 will reduced the overhead of both GPU and CPU. 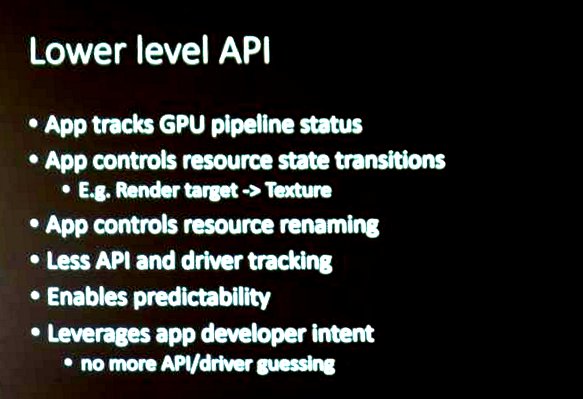 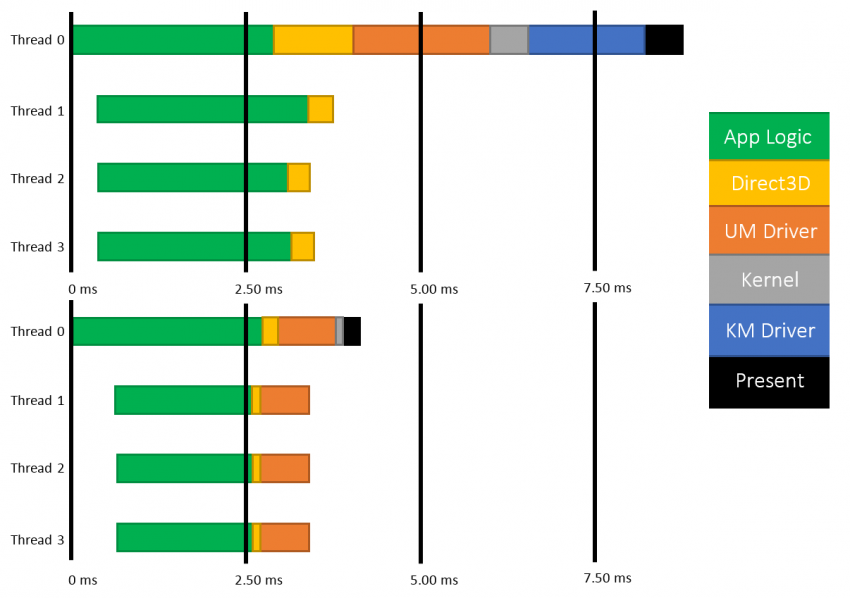 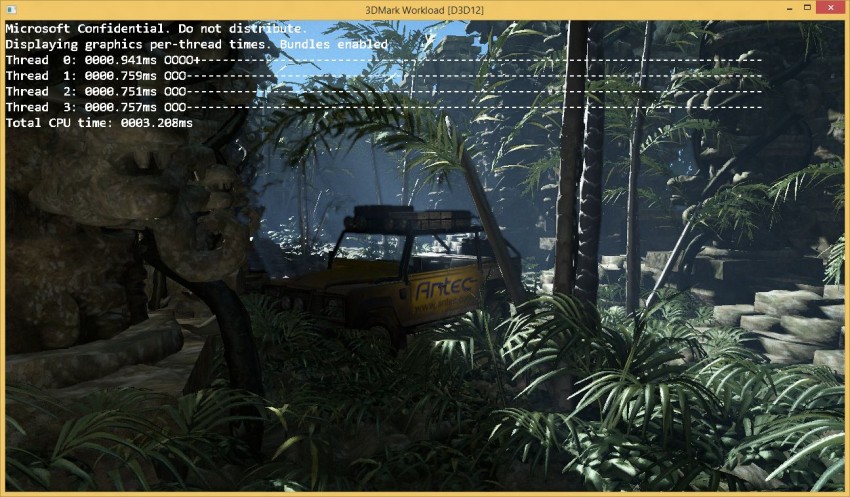 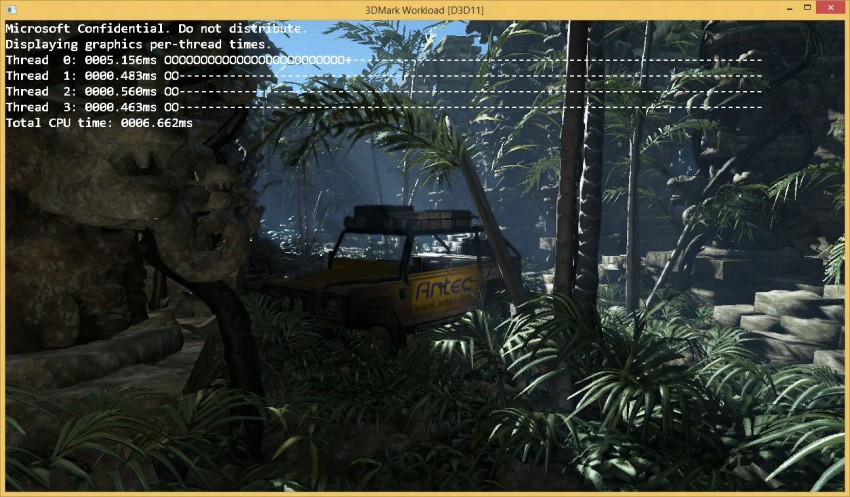 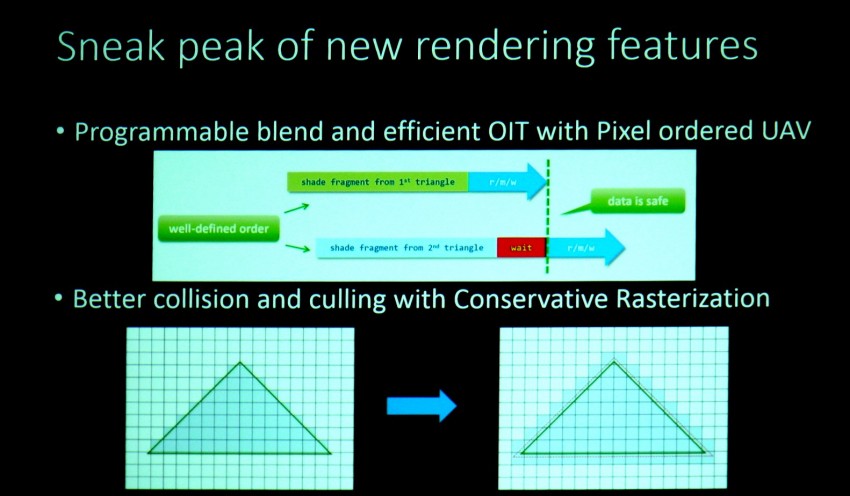 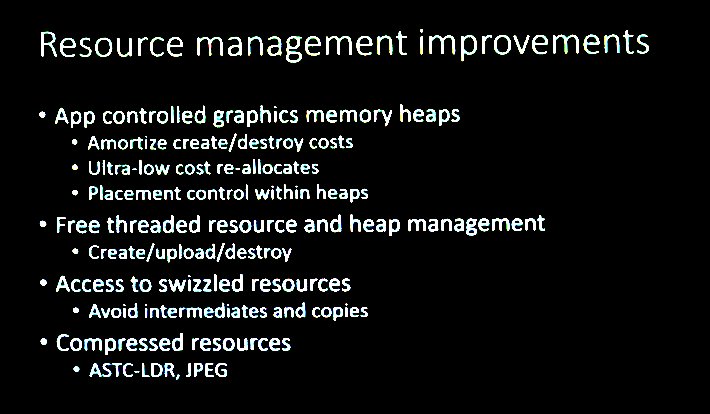 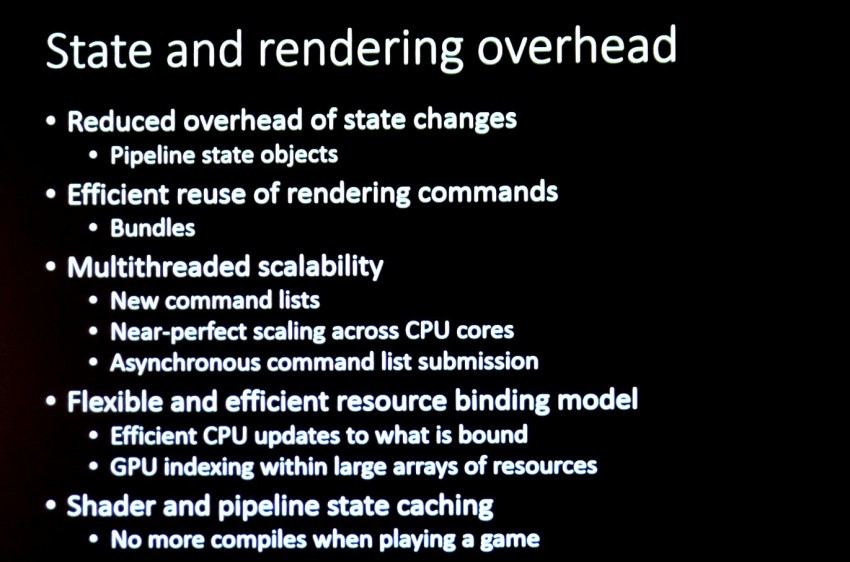 Direct3D 11 allows pipeline state manipulation through a large set of orthogonal objects.  For example, input assembler state, pixel shader state, rasterizer state, and output merger state are all independently modifiable.  This provides a convenient, relatively high-level representation of the graphics pipeline, however it doesn’t map very well to modern hardware.  This is primarily because there are often interdependencies between the various states (…)

Direct3D 12 addresses this issue by unifying much of the pipeline state into immutable pipeline state objects (PSOs), which are finalized on creation.  This allows hardware and drivers to immediately convert the PSO into whatever hardware native instructions and state are required to execute GPU work.  (…)

In Direct3D 11, all work submission is done via the immediate context, which represents a single stream of commands that go to the GPU.  To achieve multithreaded scaling, games also have deferred contexts available to them, but like PSOs, deferred contexts also do not map perfectly to hardware, and so relatively little work can be done in them.

Direct3D 12 introduces a new model for work submission based on command lists that contain the entirety of information needed to execute a particular workload on the GPU. (…)

Resource binding in Direct3D 11 is highly abstracted and convenient, but leaves many modern hardware capabilities underutilized.  In Direct3D 11, games create “view” objects of resources, then bind those views to several “slots” at various shader stages in the pipeline.  (…)

NVIDIA confirmed that all Fermi, Kepler and Maxwell GPUs will support DirectX 12. We don’t know whether this is a 100% API support or just a feature set support, however it does mean that DX12 is more like an extension to DX11 rather than completely new API, which would require hardware implementation.

Intel also confirmed that 4th generation Haswell will support DX12, it does not mean that all CPUs will support it, in fact only Iris and Iris PRO will.

Microsoft is targeting Holiday 2015 games, so it’s still more than a year before we see a final release. Microsoft promised to deliver a preview driver somewhere latest this year. 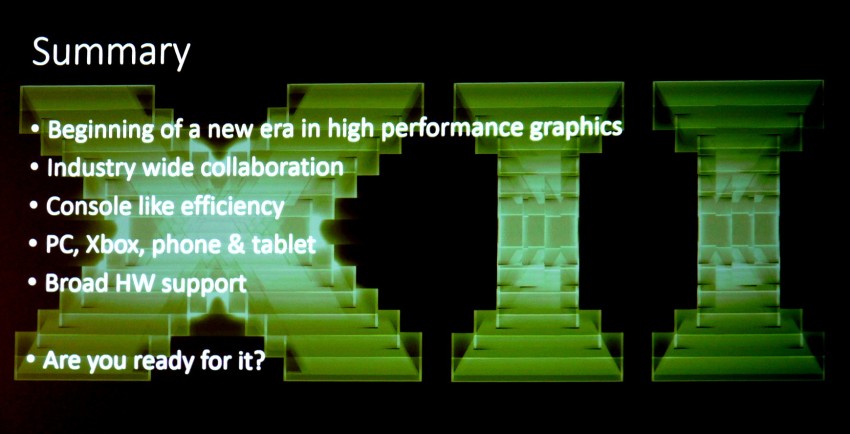 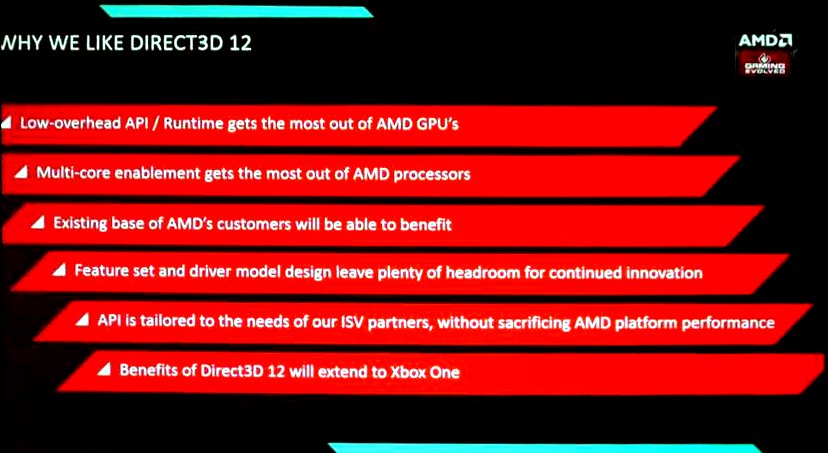 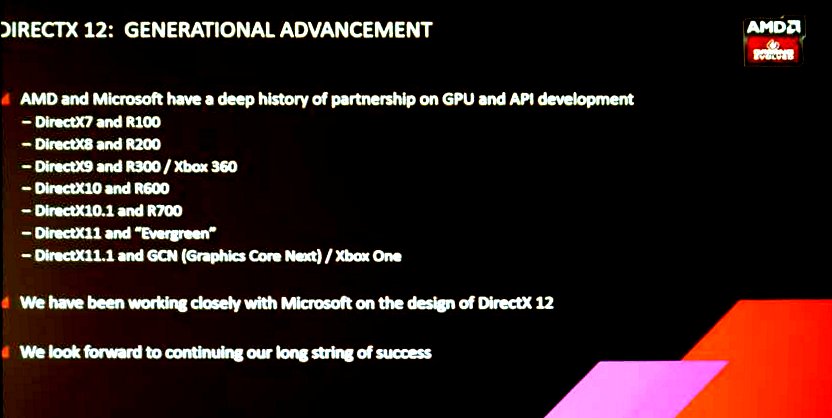 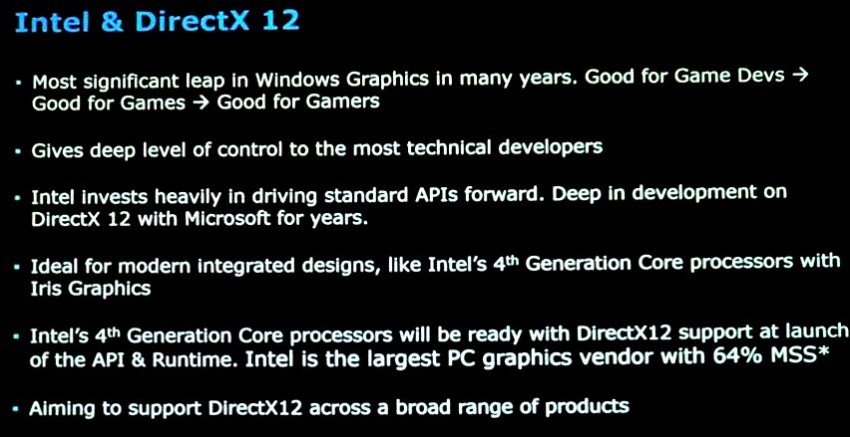 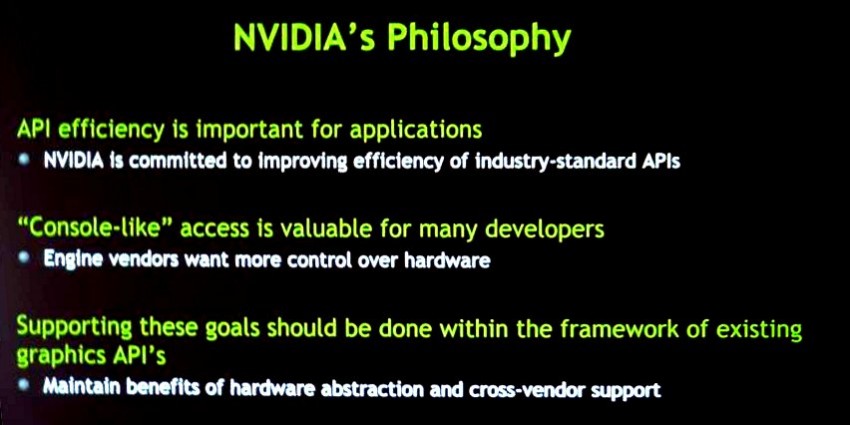 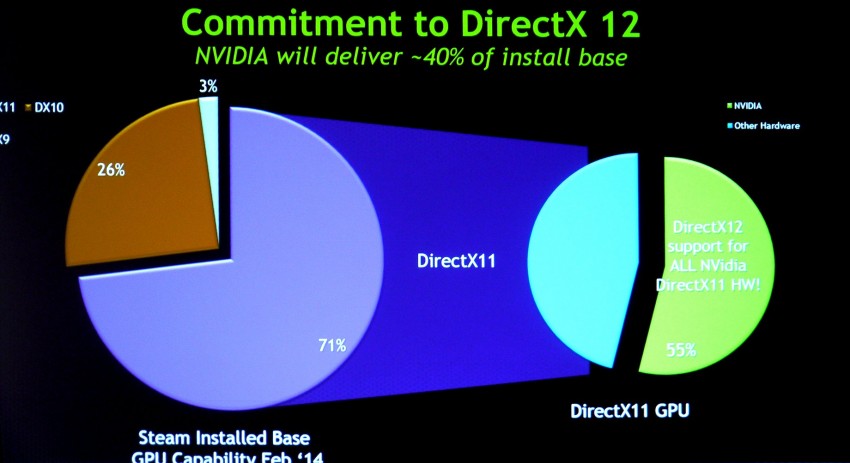 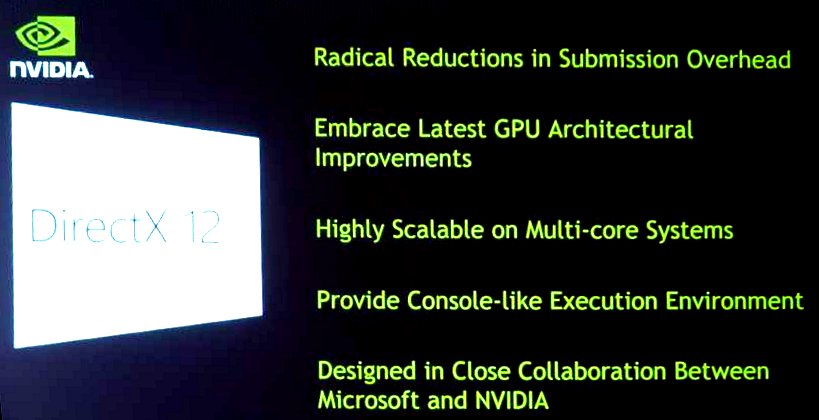 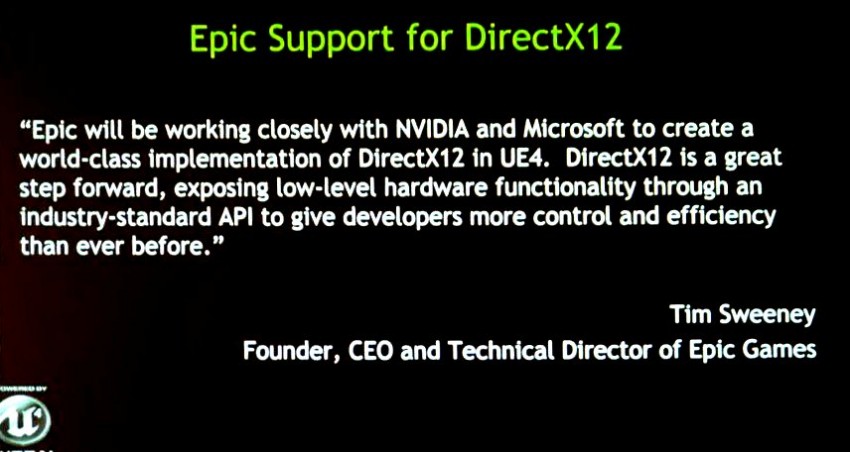 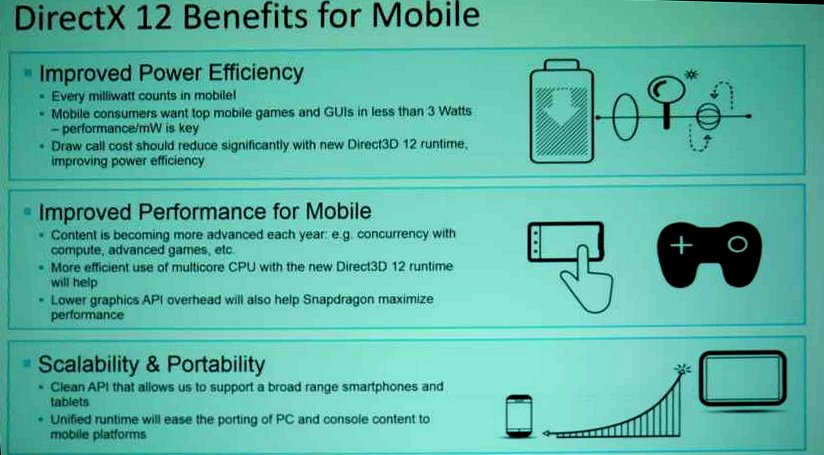 Game porting from DX11 to DX12 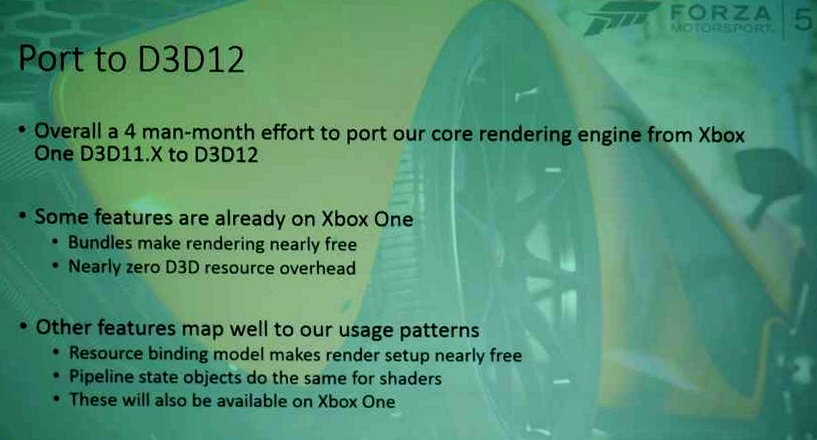 Q: Should I wait to buy a new PC or GPU?
A: No – if you buy a PC with supported graphics hardware (over 80% of gamer PCs currently being sold), you’ll be able to enjoy all the power of DirectX 12 games as soon as they are available.

Q: Does DirectX 12 include anything besides Direct3D 12?
A: Also new is a set of cutting-edge graphics tools for developers.  Since this is a preview of DirectX 12 focused on Direct3D 12, other technologies may be previewed at a later date.