I usually make launch posts a day before official announcements, but since I got little bored I thought I’d make it today.

NVIDIA is preparing two cards, both based on GM107 GPU, the first Maxwell processor. Maxwell GM107 features 640 CUDA cores, 40 TMUs and 16 ROPs. This is also a configuration of GTX 750 TI. The full GPU has 5 SMMs (Streaming Multiprocessors Maxwell). The GTX 750 non-Ti will pack 4 SMMs, which means it has 512 CUDA cores and 32 TMUs. The rest is pretty much the same, although GTX 750 will offer even lower TDP of 55W (5W less than GTX 750 Ti), and less memory (although you will be able to find 750 Tis with 1GB too.

You could say that NVIDIA took the same path as AMD did with Hawaii processor. It’s still on the same fabrication process, but the architecture is improved and more power efficient. If you’re interested in the architectural improvements make sure to check my previous post. Below is the official specs sheet and the SMM in detail. 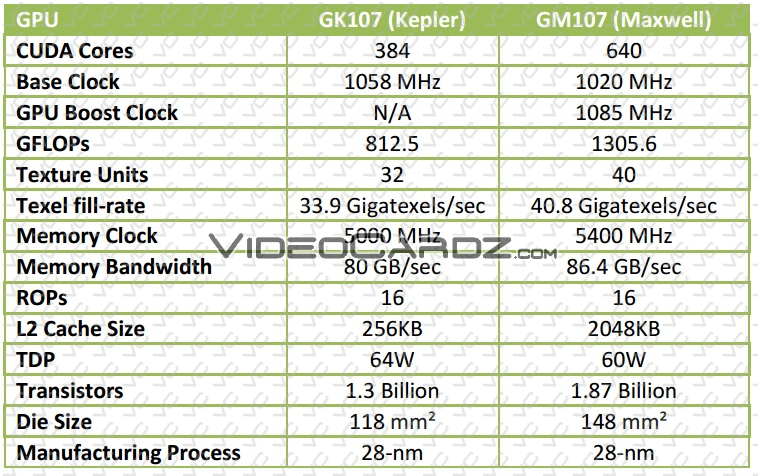 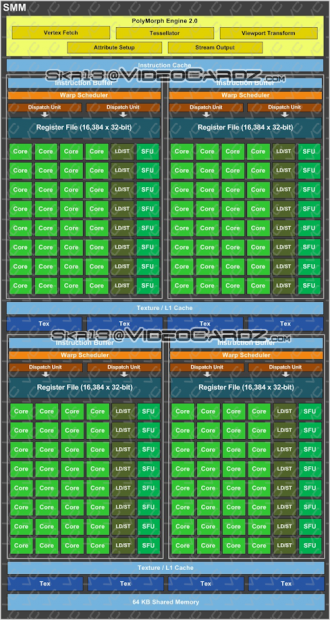 The card is one-and-half slot design. The reference board will be adopted by few manufactures, but don’t expect them to use the reference cooler. Both reference Maxwell models do not have any power connectors. Power is drawn directly from the interface, which is more than enough to provide enough current and voltage. 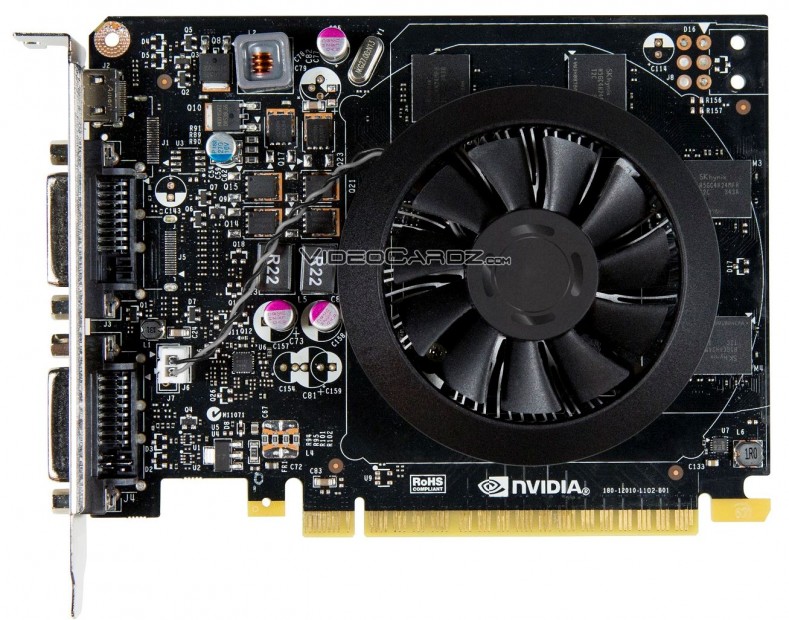 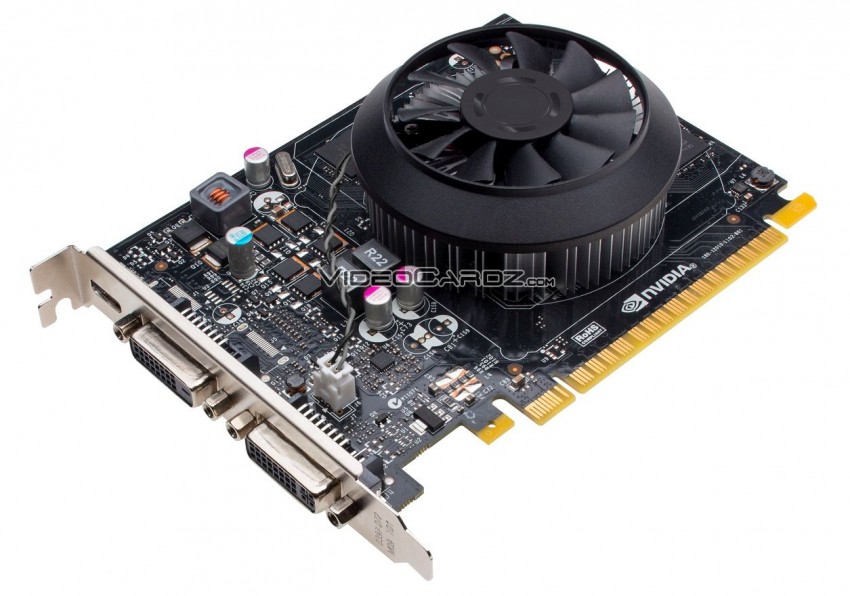 GeForce GTX 750 performance is not breathtaking, but it shouldn’t be considered by the plain numbers and framerate comparisons to other cards, unless we consider how little energy it requires to compete with them.

Let me just start by saying there are no detailed benchmarks results for GTX 750 non-Ti (from official source). What we do have however, is one chart showing a comparison to its direct competitor — Radeon R7 260. As you can see in NVIDIA-picked titles it offers the same or considerably better performance. While it doesn’t look very special, we should mention that R7 260 consumes 95W and GTX 750 only 55W. For HTPC builders this is more than enough to choose GeForce card. 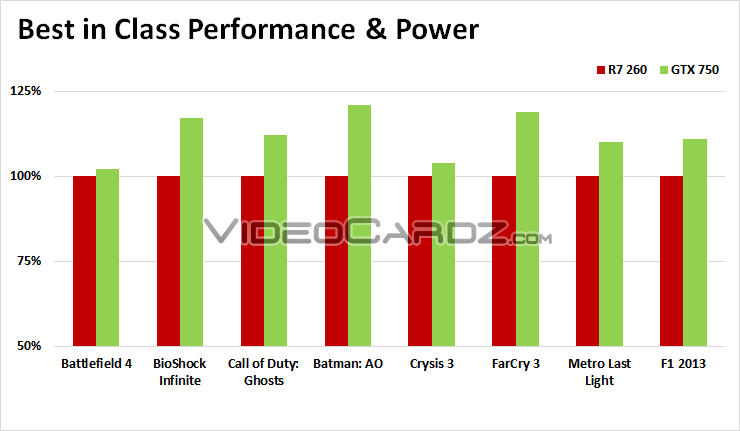 NVIDIA is really proud that they managed to reduce the power consumption almost 3 times compared to Fermi GTX 480 (the one you could fry eggs on).

The TDP has been dramatically reduced to 60W from Fermi’s 250W. GeForce GTX 480 has 384-bit interface so this comparison is nothing without clearly stated resolution (this chart is at 1080p). 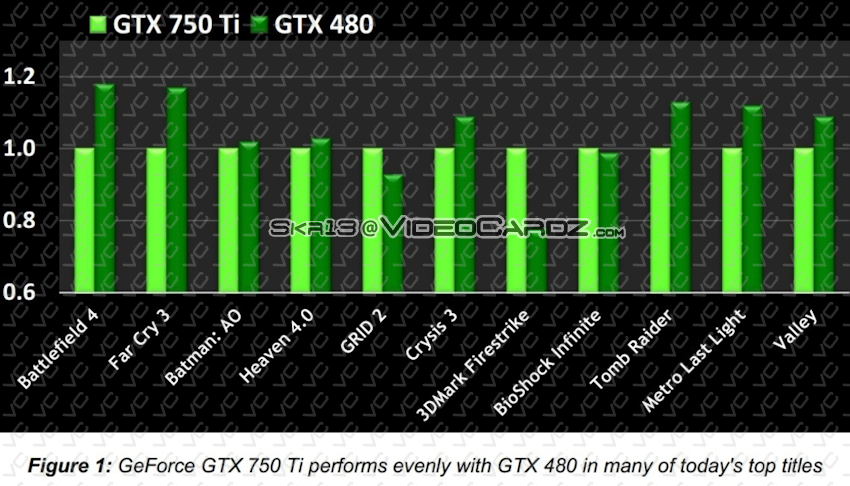 Moving on to more detailed benchmarks. In AMD titles, like Tomb Raider or Battlefield 4 the difference is almost nonexistent. Other games follow the same path. We have a 5% (Tomb Raider)  to 38% (COD) performance difference. The average is 20%, so it’s safe to assume that we are looking at 10-15% difference.
Let’s not forget Radeon R7 260X has 896 Stream Processors and 56 Texture Units, so it’s quite obvious that Maxwell is more powerful on architectural level, providing better performance with almost twice less power consumption. 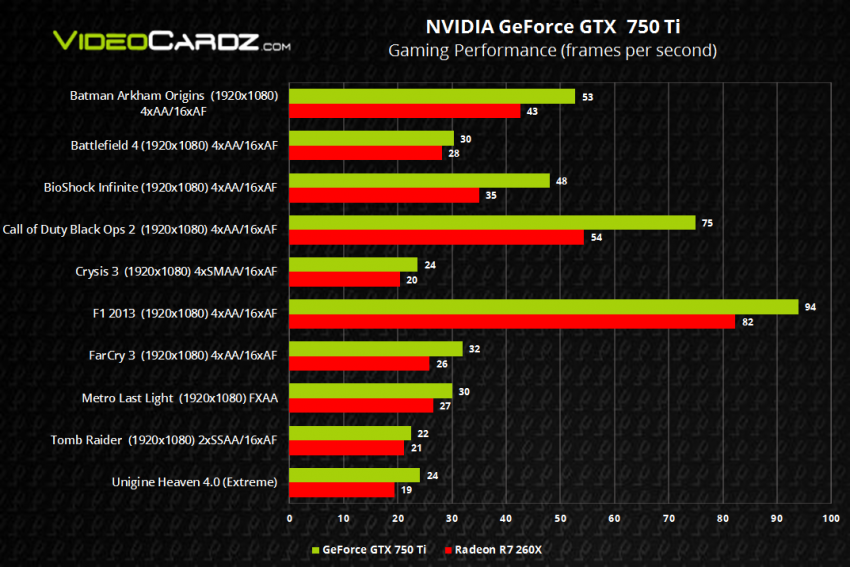 There is one key part that wasn’t covered yet. Because of extremely low TDP the clocks speeds suffered. NVIDIA had to choose the lowest possible clocks to obtain 60W. For that reason Maxwell GM107 GPU has extreme overclocking potential. In fact you will even find cards with 28% factory-overclocking.

Long story short, you will easily be able to obtain 1200 MHz clock, but only with the cards equipped with additional power connectors.