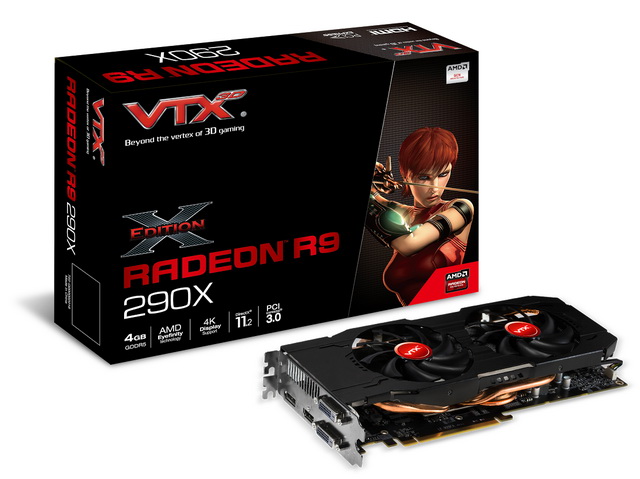 VTX3D has just announced its second version of the R9 290X X-Edition.

There are already two X-Editions of the R9 290X in VTX3D lineup, both based on reference design, but one bundled with Battlefield 4.

Calling Radeon R9 290(X) series under X-Edition nomenclature is probably one of the worst ideas ever. People are really confused what is the R9 290X and what is R9 290. Guys over at VTX3D should really think this through before Radeon 300 series arrive.

But let’s move to our newest guest to Radeon family. The R9 290X X-Edition V2 (VXR9 290X 4GBD5-DHX) is a fully custom solution. The PCB is slightly different than reference, but since there are no detailed pictures of it, I can’t say what has changed.

Card is clocked at 1030 MHz, which is a default factory-overclock for almost every custom R9 290X on the market (manufacturers seem to struggle getting more juice out of Hawaii with acceptable temperatures). The memory clock has not been modified and remains at 5 GHz. The second version of X-Edition is equipped with custom cooler, which is a dual-slot and dual-fan design.

At this point I don’t have more pictures of it, but the rumor has it that this will be the cheapest non-reference R9 290X on the market.