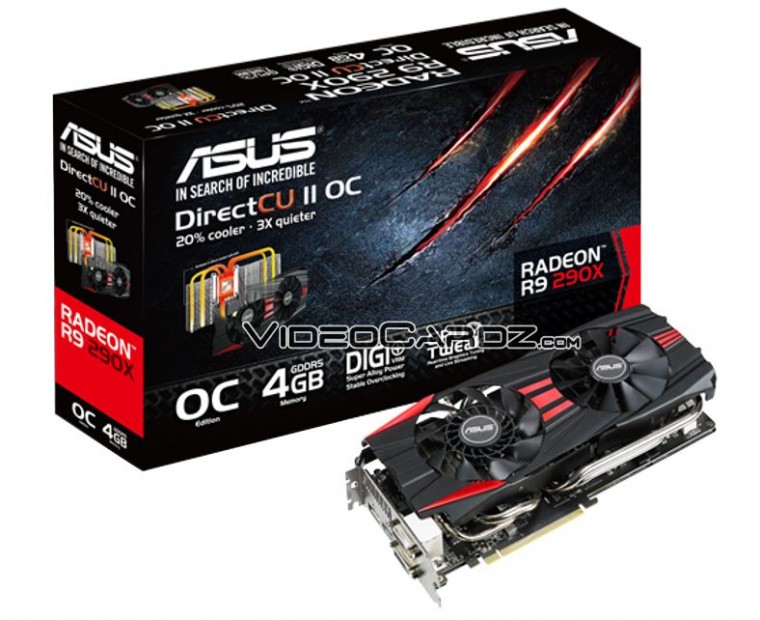 Not that long ago ASUS was asking everyone on Facebook if they should implement some changes to the final revision of their custom Radeon R9 290X featuring DirectCU II cooler, well it appears there aren’t many.

The DirectCU II version of ASUS R9 290X will run at 1040 MHz GPU clock. The question whether this clock will remain stable under heavy load, thus higher temperatures, remains a mystery. What is interesting is that R9 290X DC2 will have factory-overclocked memory to 5.4 GHz (400 MHz overclock), and that’s with Elpida modules. In terms of other specs, the rest is pretty much standard. The R9 290X DC2 arrives with 4GB GDD5 memory across 512-bit interface. It also features Hawaii XT GPU with 2816 shaders.

The reference Radeon R9 290X has 5+2 phase power design, while ASUS R9 290X DC2 is equipped with 6+4 phase design, not a huge difference here. Additionally DirectCU II version will only feature 8+6 pin power connectors. That’s definitely disappointing if you were planning some overclocking.

Now let’s talk about the features. If you liked the idea of the stickers on GTX 780 TI DC2, then I have good news. The R9 290X will have the same option. You can use red or gold stripes if you’d like to. You can also leave it as it is,  and enjoy the pure black cooler design.

The updated DirectCU II cooler has two fans, including a CoolTech version. This always makes me wonder why they only used one if this is such a great feature.

In UBER mode which is actually called Performance mode you should expect much quieter operation than reference model (33dB vs 41 dB). There’s also a Silent mode providing even better noise reduction (~24 dB). The DirectCU II cooler will provide at least 10°C lower temperature (that would be in Furmark).

ASUS doesn’t say much about the performance. They only provide one chart from Metro Last Night claiming that their card is 4.7 % faster. How does this correspond to other games and synthetic benchmarks? I guess we will have to wait and see.

I expect ASUS Radeon R9 290X DirectCU II OC to be officially introduced this year, but no specific date has been mentioned.