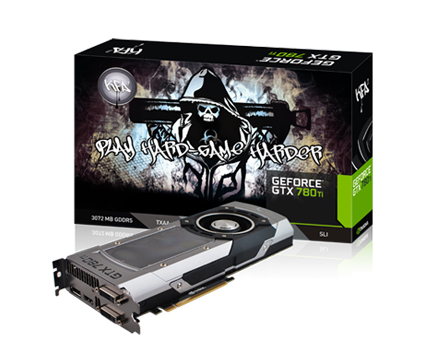 NVIDIA G-Sync is one of the most revolutionary new technologies to be featured in the GTX 780 Ti, completely eliminating screen tearing, input lag and stuttering when paired with a G-Sync Ready display.  GeForce ShadowPlay lets you capture all your greatest gaming moments automatically, and NVIDIA GPU Boost 2.0 ensures your GPU operates at the pinnacle of its potential at all times.  4-way SLI support allows multi-GPU scaling for maximum detail levels with smooth frame rates in even the most demanding configurations such as 4K and triple 1440p Surround.  The GTX 780 Ti also introduces Microsoft DirectX 11.2 and OpenGL 4.4 compatibility, adding support for the latest state of the art effects featured in the newest games and applications.

“ Yet again a new level of performance has been set with GeForce 780 Ti, with 2880 cores and 7GHz of memory this card has enough horsepower to handle any future 4K game play”

Backed by a 2 year warranty, available is throughout Europe.