I got my hands on some official documents from NVIDIA thanks to my Asian friends, thus I decided to share my knowledge with you.


The new flagship was not designed as TITAN replacement, it will serve a different purpose, which is strictly gaming-oriented. TITAN is still better for CUDA developers, researches or scientists, since it provides good double-precision performance and 6GB frame buffer. The GTX 780 Ti on the other hand, will (for now) only ship with 3GB memory. Official document does not mention any 6GB or 12GB variants.

NVIDIA GeForce GTX 780 Ti is equipped with 2880 CUDA cores. The most interesting part is that GTX 780 Ti still has high number of 64-bit CUDA cores (960), this is even more than GTX TITAN. So it seems that the only benefit of having a TITAN right now is 6GB frame buffer.

Moving on to power characteristics. GTX 780 Ti has much lower TDP than 290X, which is 250 watts. This is actually the same number as for TITAN and 780.

NVIDIA equipped its GTX 780 Ti with a new feature called Power Balancing. Without this feature power drawn from: 6-pin power connector, 8-pin power connector and PCI Express interface would be balanced across these three sources respectively depending on the current load. However if user overclocks the card power delivery becomes unbalanced, thus card draws more power from one source than the others. To fix this problem NVIDIA came up with an idea of Power Balancing. You probably see where this is going. With this feature enabled GPU can steer the power from one input to another. This will improve overclocking capabilities in comparison to GTX 780 or the TITAN. 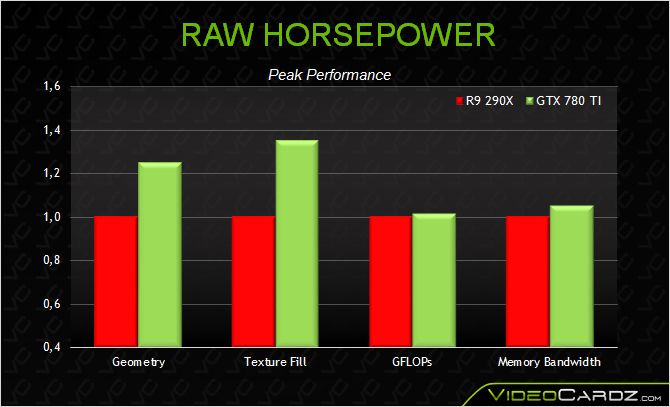 Chart was remade from the original

NVIDIA clearly targets Radeon R9 290X in their comparisons. The green team is well aware of AMD problems with the noise and the temperature of their new flagship. NVIDIA’s theory is that since R9 290X is using 455mm2 die and GTX 780 Ti is based on 533 mm2 die, it equals to lower thermal density, thus less power condensed into smaller area. Long story short, NVIDIA’s GPU will generate less thermal density per square millimeter, so it is easier to dissipate.


NVIDIA already announced that their newest, and fastest graphics card will be available for $699, which is obviously much more than R9 290X’s launch price ($549), but also much less than TITAN’s ($999). Official document does not mention any special edition of the card.