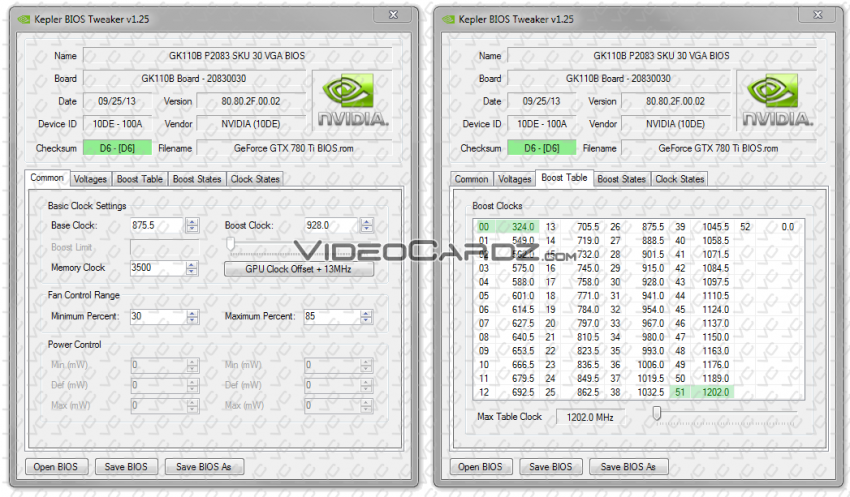 You were probably wondering why I didn’t post anything about the ‘leaked’ GPU-Z screenshots from Chinese forums. Unfortunately these are all fake, so I would only waste my and your time.


Today I have big news for you, some preliminary specs of GeForce GTX 780 TI.

So the only thing I cannot confirm yet is the configuration of the GPU. Everything suggests that we with slightly faster GPU and much faster memory. There is a slim chance that GTX 780 Ti could be equipped with 2880, especially since the clocks are not much higher than TITAN’s, and I already know that power section had to be redesigned, so the card does require more power (they wouldn’t redesign it for 50MHz right?). Let me also remind you that NVIDIA calls it ‘Newest and Fastest Graphics Card Ever’. So yeah, we can still hope it’s the full GK110.

AMD took the crown of performance last week by launching Radeon R9 290X. NVIDIA cards with 384-bit bus look quite poorly compared to 4GB 512-bit card from AMD. Thus, the Green Team decided to pump more power to the memory by installing 7 GHz modules. This way GTX 780 Ti will have 16GB/s higher bandwidth than R9 290X. Is this enough to compete in 4k gaming? Time will tell.

I cannot confirm yet if 3GB memory is the only possible configuration here. I do hope that NVIDIA will also launch 6GB cards, maybe after a while when all TITAN’s are sold out.

While the TITAN was a bridge between GeForce and Quadro cards with much better 64-bit floating point performance (every SMX had 192 FP32 and 64 FP64 CUDA cores) the GTX 780 Ti will feature less FP64 CUDAs. The GTX 780 Ti is definitely more gaming oriented, so it is an obvious and unsurprising move.

NVIDIA GeForce GTX 780 Ti will be released next week, on November 7th for the price of 699 US dollars.

Contact me if you know how to read CUDA cores from graphics card’s BIOS.