The Radeon R9 290, which will be released next week is going to be a very good graphics card for the price.

According to multiple reports Radeon R9 290 will easily beat GeForce GTX 780 in almost any game or benchmark. Of course that’s while being priced significantly lower (even 290X is cheaper) than GTX 780. Earlier leak from Overclockers UK revealed that overclocked R9 290 can even beat the R9 290X or the TITAN in some scenarios.

The R9 290 is equipped with Hawaii PRO GPU, a cut-down version of XT. The main difference is in Stream Processors count. The R9 290 has 2560 SPs, which is exactly 256 less than 290X has. Since texturing units are tied with the number of cores you will also get less of them — 160. The ROPs count should remain at 64, which is a very good number for high-resolution gaming. Of course even memory bus was not crippled in any way, so 4GB GDDR5 memory and 512-bit are still in the game. According to DarkLord’s preview this card will consume around 250 Watts, which is a similar number to TITAN’s or 780’s.


Everyone knows that synthetic benchmarks are not the most reliable way of comparing cards. For that reason games are usually the most interesting part of every review. Games, which were selected by the leaker, actually do include some AMD favored titles, but not as many to call this comparison unreliable.

So in these games, as shown below, you should expect at least the performance of GeForce GTX 780, NVIDIA’s card couldn’t  win with the new 290 in any game. Only in BioShock Infinite and Battlefield 3 the GTX 780 was able to offer the same framerates as the R9 290. The difference between the GTX 780 and R9 290 is withing the margin of error, so I guess which card is going to win will depend on the reviewing site and its sponsors.

The R9 290 is supposedly featuring the same BIOS profiles as 290X: UBER and Quiet. It also has the same issues, mostly with temperature and noise. I guess the appearance of the aftermarket cooling solutions should be the best moment for buying this card. 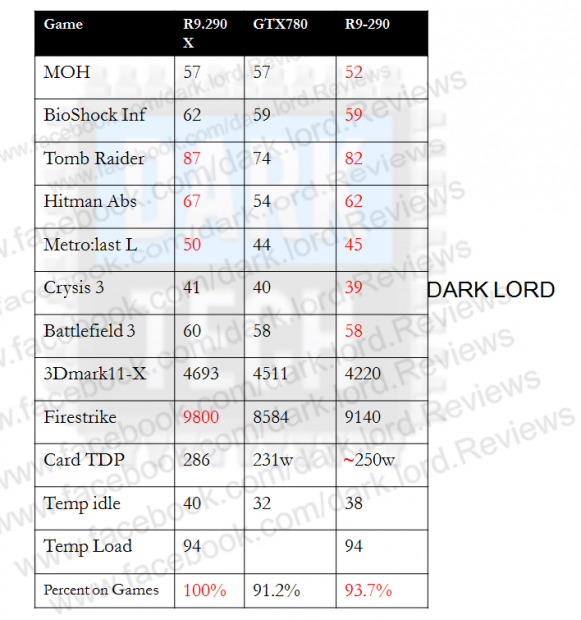