A new era in gaming has begun and gamers who demand the best deserve a new class of GPU’s. These GPU’s will carry the R9 label from now on. When you see an R9 card you can easily distinguish it as an enthusiast product. With the new R9 290X cards representing the absolute top of the charts.

The first Radeon R9 290X cards to hit the market will be exclusive limited edition bundles with the eagerly awaited and biggest title in PC Gaming in 2013, Battlefield 4! Back in 2002 EA/ Dice stunned the world with the launch of Battlefield 1942. Over the years the franchise has become hugely popular with millions of gamers all around the globe.

In total there have been 11 Battlefield games and 12 expansion packs. With every version the game became more detailed and realistic, fully immersing the player into any battlefield thinkable. In 2011 Battlefield 3 launched and was the new (graphical) benchmark for First Person Shooters. But with strong competition DICE feel it’s their duty to take Battlefield 4 again to a completely new level of almost photorealistic graphics. So here it is. Bundled with the Radeon R9 290X cards before it officially becomes available! There will only be 8000 pieces worldwide, so make sure you order your R9 290X Battlefield 4 limited edition bundle before they are all sold out. 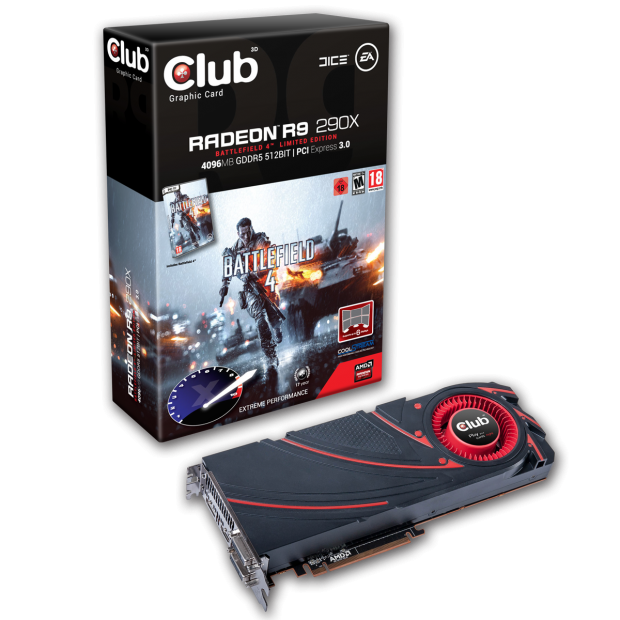 A true showcase of GPU innovation and technology, the Radeon R9 290X is the most powerful AMD GPU yet and the best choice to play Battlefield 4 in 1440p or 4k 2160p resolution in Ultra settings! Not only does this new flagship GPU break barriers in terms of performance, the amount of technological innovations is staggering. Based on the AMD Graphics Core Next second generation architecture, fitted with 4096 MB of GDDR5 memory and 512 bit memory bus, this card has what it takes to render every frame smoother and quicker than ever before. You want figures? How about 2816 stream processors,  5.6 TFLOPS of computing power, 320 GB/s of memory bandwidth and a whopping 6.2 billion transistors. All these numbers are record breaking for a single GPU solution and make the R9 290X so powerful it’s the best choice for the next evolution in PC gaming: 4K Ultra HD resolution gaming! But it doesn’t stop here, the R9 290X fully supports DirectX 11.2, OpenGL 4.3, Mantle* and features the brand new AMD TrueAudio Technology. TrueAudio is a revolution for audio designers and game developers, similar to programmable shaders. It enables amazing Directional Audio over any output. In other words, you will be able to hear where your team mates or enemies are better than ever before.

It’s clear; this card is a winner from the start and a worthy successor of the already legendary HD 7970!

*AMD Mantle is fully new and is a completely new API (Application Programming Interface) developed as an alternative to Direct3D and OpenGL. It is a low level API allowing the developers to program direct to the GCN core, allowing significantly better hardware performance!