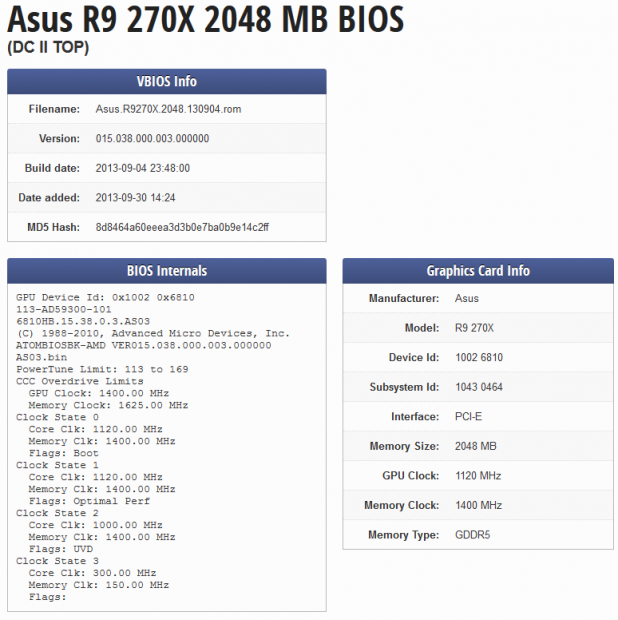 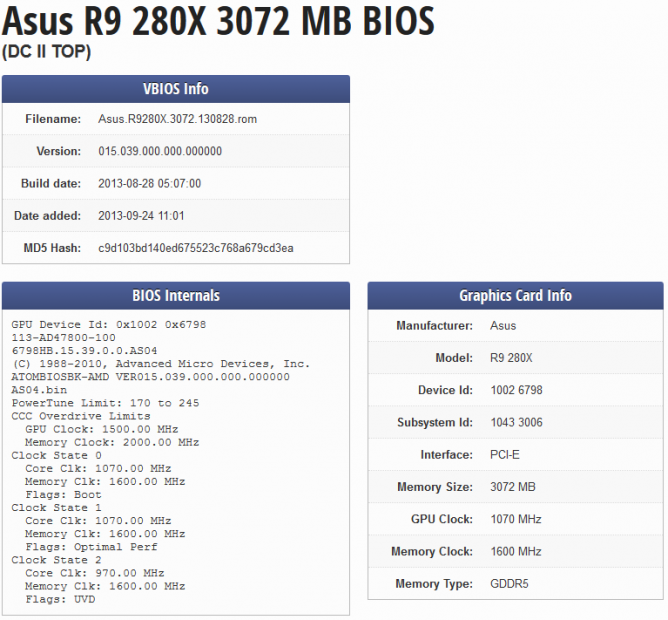 Two BIOSes of a new DirectCU II TOP models have leaked into web.

There is still a discussion going on multiple forums whether R9 270X is using a Tahiti LE, Pitcairn or Curacao GPU. While Curacao and Pitcairn are technically the same, Tahiti LE processor is slightly different. Unfortunately it is still not confirmed whether this particular Device ID (6810HB.15.38.0.3.AS03) is from Pitcairn or Tahiti family, since it’s a completely new addition. The only source who mentioned Tahiti GPU was OCUK admin, calling 270X a crippled 7950. TechPowerUP says a bit more, that 270X could be a mixture of Tahiti PRO and Tahiti LE, with 1792 Stream Processors, but 256-bit bus. We still think that 270X is using Curacao XT though — HD 7870GE rebrand.

The rest of the specs is quite obvious thanks to the information found in the BIOS. We are looking at 2GB GDDR5 memory across 256-bit interface. The memory is clocked higher than 7870 GE — at 1400 MHz — which gives 5.6 GHz effective speed. Also the GPU clock has been overclocked by at least 100 MHz, giving a number around 1120 MHz. This is of course a factory-overclocked model, so these number are slightly lower for reference boards.

ASUS R9 280X TOP will be clocked at 970/1070 MHz, which is slightly less than we’ve expected. The memory clock however is much higher — 1600 MHz — meaning the card will run at effective 6400 MHz. It is no secret that 280X is using a Tahiti XT GPU. Also 3GB GDD5 memory and 384-bit interface is nothing you should be surprised about.

Technically you can already download both BIOSed and be one of the first to own R9 graphics card. Although it will be very risky and I don’t encourage you do to so. Plus, unless you have a leaked drivers, your card will still be recognized as 7800/7900 series.

ASUS is also working a new Matrix graphics card. By new I also mean a new cooler. I have no details yet, but I thought you might be interested.

UPDATE: Little update on ROG Matrix R9 280X. According to the new information, this model will be clocked at 950/1100 MHz, making it slightly faster than TOP (considering boost state). The memory clock remains the same speed as on TOP — 6400 MHz.

The NDA on 280X will be lifted on October 8th. This is when reviewers are allowed to publish their reviews. Cards with aftermarket cooling solutions will be shown few days later. The embargo date on 270X is still unknown.

On Chinese forums you can find interesting threads about a mysterious announcement happening between Oct 12th to 20th in Beijing. It’s supposedly an official showcase of R9 and R7 graphics cards from the main Radeon suppliers, like Onda, Sapphire, PowerColor, HIS Digital, XFX or Unika.